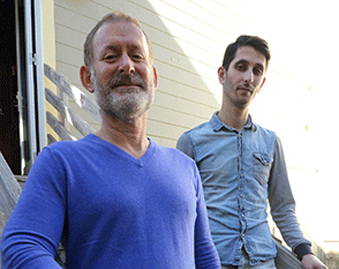 Michael Chertok, president of congregation Sha’ar Zahav, is among congregation members who have offered to open their homes to LGBT refugees.

Pulling out his cellphone, Sergo Adamian quickly hit play on a YouTube video that captured the sea of men attacking a van with LGBT rights activists inside, including him, as it moved through a street in Tbilisi, the capital of the Republic of Georgia. While police officers kept the mob at bay, the vehicle was nonetheless hit with sticks, bottles, and other objects that damaged its windows.

The occupants inside were fleeing from the 40,800 protesters, led by 200 priests from the Georgian Orthodox Church, who showed up to counterprotest the rally Adamian and his colleagues had organized on May 17, 2013 to mark the International Day Against Homophobia. The group of 100 LGBT Georgians and their allies were protected by 3,000 police officers, said Adamian, who escaped injury that day.

“If not for the policemen, for sure we would have all died,” recalled Adamian, 27, as he re-watched the chaotic scene. “It was terrifying.”

Over the ensuing months Adamian, whose family broke ties with him over his sexual orientation and disbelief in religion, realized that remaining in his home country was untenable. In September 2013 he fled to Kiev, Ukraine where he applied for refugee status through the United Nations High Commissioner for Refugees. It wasn’t until April 2015 that he was resettled in the United States, first being placed with a host in West Oakland by Jewish Family and Community Services East Bay.

Since January Adamian has been living in San Francisco’s Glen Park neighborhood in the two-bedroom home of Michael Chertok, 53, a gay man who is president of Sha’ar Zahav, the city’s predominantly LGBT synagogue. Throughout 2017 the congregation is focusing its social justice work on supporting immigrants and refugees, and a number of its members have offered to open their homes to LGBT refugees.