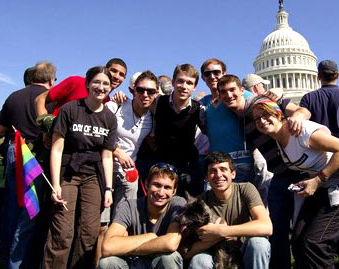 Earlier this year, Hillel announced a partnership with Keshet in order to better support campuses in overcoming divides between Judaism and sexual identity.

As part of Hillel’s ongoing commitment to Lesbian, Gay, Bisexual, Transgender, Queer (LGBTQ) inclusion, we’ve compiled a list of seven colleges we think are doing an awesome job of engaging in active collaborations with campus LGBTQ centers, have LGBTQ-inclusive policies and programming, and even support Jewish LGBTQ student groups. So as you continue to look for the perfect campus and make your college decisions, we encourage you to consider one of these schools doing great work:

1. University of Maryland: University of Maryland’s Jewish LGBTQ group, Hamsa, invites everyone and anyone, regardless of social or religious orientation, to join events and discussions hosted and led by the group. The group is for everyone who wants to make the Jewish community a more comfortable place for and more accepting of LGBTQ students. If you would like to learn more about Hamsa, contact Elie Dickler.

2. Columbia and Barnard: Columbia and Barnard Hillel’s Gayava is the Jewish LGBTQ group open and available to all students on campus. It provides a safe environment for undergraduate and graduate students to socialize as members of both the Jewish and LGBTQ communities. Gayava also makes a noticeable effort to foster awareness of LGBTQ issues in New York and in the greater Jewish community.

3. University of Wisconsin: One in a Minyan is the Jewish group available to all students at the University of Wisconsin, Madison. The group works to provide support and programming for LGBTQ individuals and all of their allies. One in a Minyan hosts movie nights, discussions, guest speakers, as well as other social and educational opportunities. Please contact Jen Jennings if you would like more information.