Once again, the Aguda — National LGBTQ Task Force is championing the Pride Platform which emerged from the July 22, 2018, LGBTQ strike in Israel. On that day, thousands of people demonstrated against LGBTQ inequality. The Aguda’s platform highlights the key issues of importance to the community, including: preventing hate crimes, full recognition of LGBTQ families under the law, adjusting welfare services to the LGBTQ community, equality in health, and education and public acceptance of the LGBTQ community.

The Aguda met with several parties running to ask for their support of the platform. Below is their table reflecting the commitments of each party to the LGBTQ Community: 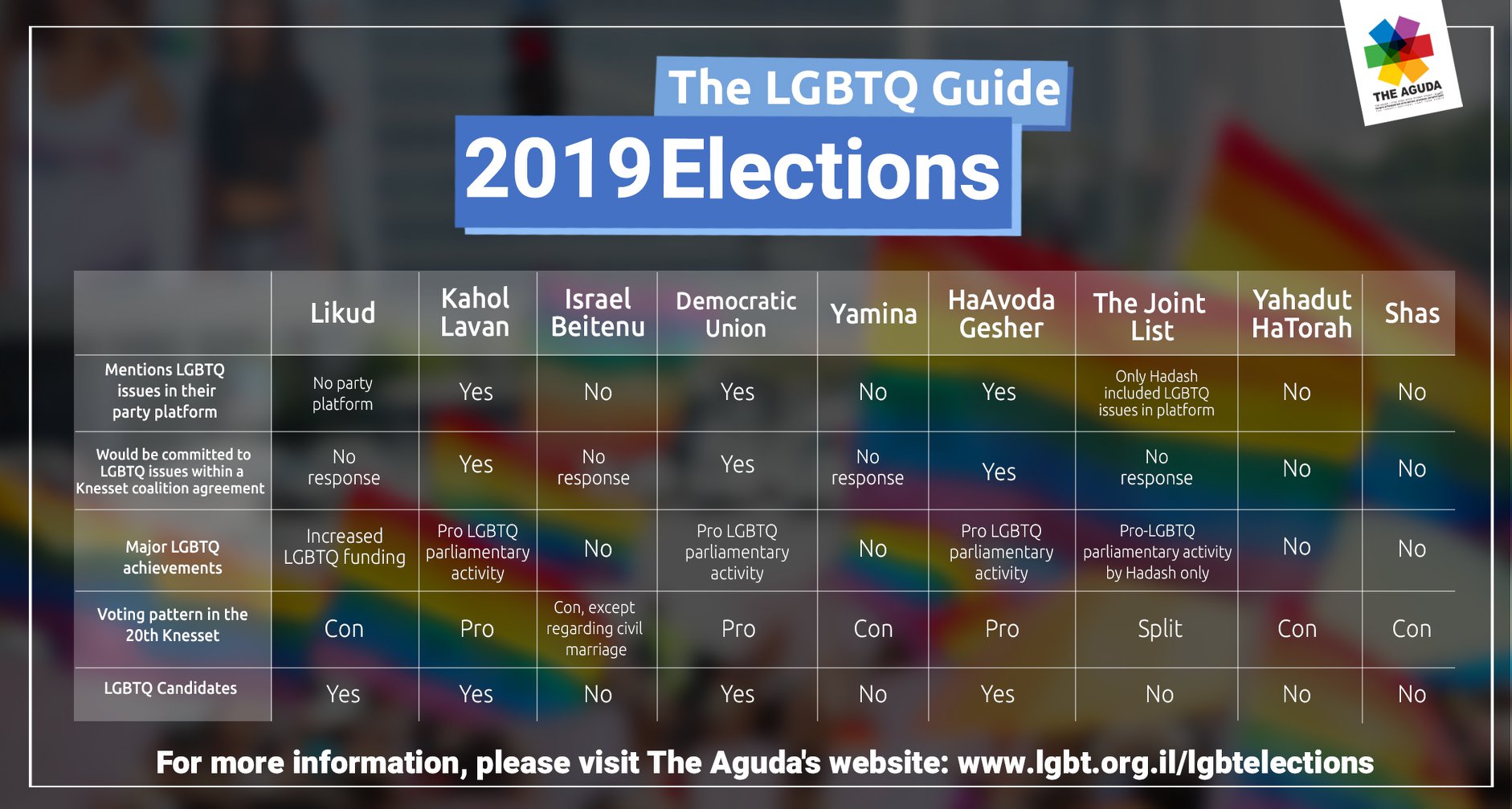 WHAT’S AT STAKE FOR THE LGBTQ COMMUNITY?

2018 was a watershed year for the LGBTQ community in Israel. After the Knesset refused to strike down an anti-gay surrogacy bill, the community – lead by the Aguda-Israel LGBTQ Taskforce Force – implemented a nationwide strike for equality.  A 2018 Hadashot TV news poll reported that the majority of Israelis backed the strike across the political spectrum from the center-right (Likud – 51%) to the center-left (Yesh Atid and Meretz – 89%)

The strike and its aftermath pushed the LGBTQ struggle for rights to the forefront of Israeli society. Some of the likely top legislative issues facing the LGBTQ community in the next Knesset are:

In 2018, the Knesset voted to uphold a surrogacy law that makes it illegal for gay couples and single men to obtain use of a surrogate parent in Israel. Despite Netanyahu’s statement that he would support a change in the surrogacy law, he ultimately voted to keep the anti-gay surrogacy law. The LGBTQ community will bring this bill back to the Knesset to be revisited. More info.

The country’s adoption law discriminates against same-sex couples wishing to adopt, stating that adoption should only be between “a man and a woman.” The LGBTQ community has pushed for a new law that will give same-sex couples the same right to adopt children in Israel as other couples. An LGBTQ friendly adoption bill was written, but still needs to be passed into law. More info.