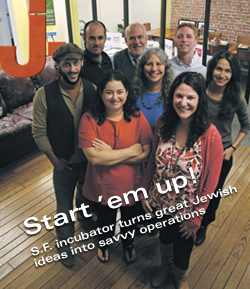 Arthur Slepian, founder of A Wider Bridge — a nonprofit that aims to bridge the LGBT community in the Bay Area with that in Israel — says being an UpStarter has allowed him to learn from the experiences of other, similar nonprofits.

“We’re at a point in our development where our budget is limited, and we can’t really afford to bring on new staff, but we need resources,” he says. “Their staff is like having access to a field group of a wide variety of consultants, in education, development, planning. When they don’t have expertise in a certain area, they’ve introduced us to people who do, whether it’s accounting, legal, insurance, or marketing and social media.”

UpStart’s story began in 2004. While working at the Bureau of Jewish Education, Rubin was visited by a young woman named Abby Levine. Levine was looking for help with the JERICHO Project, her effort to involve Jews in a progressive agenda on immigration reform, but couldn’t find what she needed — financial support or startup networking services — from established Jewish institutions like the BJE. “She didn’t fit in anywhere,” Rubin says.

Rubin realized that if there weren’t resources for that kind of work, the Jewish nonprofit world was failing its next generation of innovators.

“I didn’t need to wait for a study to tell me young people weren’t showing up to take part in the old Jewish institutions,” she says.