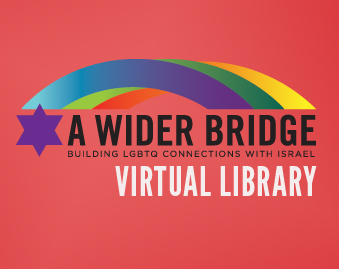 A Wider Bridge is happy to open a door to the Jewish – and especially Israeli – LGBT culture. We have built an online English resource, the first of its kind, that highlights the work of Jewish LGBT people, and can help you expand your knowledge of, and involvement in, the culture of our community.

We’ve built this resource in the form of a kind of Yellow Pages (or encyclopedia?). We’ve divided it into categories: Music: where you can find biography and sample materials of Jewish LGBT musicians. Arts: featuring the greatest Jewish LGBT artists in their fields. Film: which aspires to be a kind of IMDB page that summarizes movies that deal with LGBT Israelis and Jews. Here is a complete guide to this resource, organized alphabetically (by first name):

Amir Fay Guttman – A singer and a personality, who was the lead singer of Israel’s biggest boyband of all time, HiFive, in the late 1990s.

Ellyot – A DJ and the founder and leader of the band “Pollyanna Frank” who wrote and performed songs relating to critical issues of sex, gender, chauvinism and feminism and criticized nationalism and militarism.

Harel Skaat – Almost a winner on the second season “A Star is Born”, the Israeli adaptation of ‘American Idol’, Skaat became one of Israel’s most famous male solo artist of his time.

Inbal Perlmuter – An iconic and controversial composer, musician, singer and lyricist, and a founding member of the all-girl rock band Ha-Mechashefot (“The Witches”). Inbal died in a car accident in 1997.

Ivri Lider – One of the most successful Israeli musicians of his generation, appreciated by fellow artists, critics, and the public alike. Lider’s success has crossed the border of Israel and he has become one of the most famous out singers in the world.

Korin Alal – one of Israel’s most famous and loved rock singers, a composer, musician and songwriter, whose career in Israel spans the late 1970s until today.

Ohad Hitman – a singer, songwriter, composer and musician in Israel. Hitman was born and raised in Tel Aviv. His uncle is famous singer, lyricist and composer Uzi Hitman and grandson of Cantor Abraham Hitman.

Offer Nissim– famous Israeli producer and DJ, who is not only a world’s gay community top favorite DJ, but also received professional acclaimed as he was ranked #29 at the top 100 best DJ’s in the world according to the popular magazine DJ Mag.

Rona Kenan– Singer-song-writer and guitarist whose dark velvety voice, biting lyrics and striking presence have set the bar on what it means to be a female performer in Israel.

Yael Deckelbaum – A third of the acclaimed female folk group “Habanot Nehama” who wrote and performed three songs that made it to the soundtrack of the famous series ‘The L Word.’

Yehonathan Gatro– A unique pop singer who’s story is a classic version of the so familiar story of a popstar who was the dream of many teenage girls until he came out gay. Now he’s making his way through America’s gay scene.

Yehudit Ravitz –  One of the most successful and famous Israeli rock musicians, with a career spanning over thirty years, and has made a large contribution to the culture of Israel and to the careers of young as well as veteran artists, including poets, songwriters, composers, producers, musicians and singers.

Adi Nes (Photographer) – One of Israel’s most famous photographers; his work is known for his use of homoeroticism and the challenging of traditional gender roles.

Ido Tadmor (Choreographer) –  Famous dancer and choreographer in Israel who was one of the first public personalities to have come out of the closet and speak publically about his sexual identity.

Sichi Gilad (Photographer) – Out lesbian who often talks at LGBT (especially women’s) conventions,  freezes moments of femininity within the group, and converts daily activities that are often times associated with masculinity and manhood, and features them with a female.

Tomer Heymann (Filmmaker) – world renowned filmmaker whose documentaries often deal with Jewish culture, LGBT gender identities, and is not afraid to touch sensitive social issues and even get Political

Yariv Mozer (Filmmaker) –  An award-winning documentary films producer and director, a member of the European Film Academy and the first Israeli producer to participate in EAVE (European Audio Visual Entrepreneurs).

Yossi Avni-Levy (Author) –  One of the most prominent artists in the LGBT community, who’s also a diplomat who worked at the Ministry of Foreign Affairs and a number of senior positions in state institutions.

After / ‘Time Off’ (1990) – A young soldier  (Hanoch Re’im) is being treated very harshly by his commanding lieutenant.

And Thou Shalt Love (2007 ) – Ohad, who is studying in the special “Hesder” program for orthodox soldiers of the Israel Defense Forces, experiences profound loneliness while he conceals from others that he is gay.

Antartica (2008) – Five young Tel Avivians in search of “the light that will thaw their frozen hearts.” Is love dead or are we just looking in all the wrong places?

Deep Red (2009) – In this edgy short, Gur and Yuval will stop at nothing to make enough money for a fresh start in Berlin.

Eyes Wide Open (2009) – Aaron, a respected butcher and a family man in an Ultra-Orthodox Jewish neighborhood in Jerusalem undergoes a series of emotional changes following the arrival of a young apprentice to his shop.

Gender and Peace (2007) – A touching and vulnerable experimental short about the filmmaker’s partner’s imminent departure from Israel set against the backdrop of the Israel-Lebanon War taking place at the time.

Good Boys (2006) – wo queer youth at the margins bet on each other against the harsh realities of life amidst prostitution and drugs in this early film by Yair Hochner.

Halakeh (2008) – This is the story of a journey made by a young religious family. Their encounters with various characters along their  journey to Mount Meron highlight the chasm which has developed between them

Home is You (2012) – Yaelle moves to Israel and come out of the closet. She meets Aya, get married and they are very much in love. But their love has a price. A documentary about coming out.

Jerusalem is Proud to Present (2008) – The lives of members of the Open House, Jerusalem’s LGBT community center, who are planning the first ever Jerusalem Pride Parade, the threats they and their families receive, and who  refuse to back down.

Melting Away (2012) – Assaf leaves home and becomes Anna, a singer in a gay cabaret in Tel Aviv.

Mom, Dad, I Have Something to Tell You (2011) – A documentary about the journey parents whose children tell them they are gay are forced to take.

That’s Me, That’s Gila (2010) – The fascinating life story of Gila Goldstein, one of the first Iraeli transgender women and a Tel Aviv icon turned living legend.

The Bubble (2006) – The movie follows a group of young friends in the city of Tel Aviv and is as much a love song to the city as it is an exploration of the claim that people in Tel Aviv are isolated from the rest of the country and the turmoil it’s going through.

The Invisible Men (2012) – The untold story of persecuted gay Palestinians who have run away from their families and are now hiding illegally in Tel Aviv. Director: Yariv Mozer.

The Queen Had No Crown (2011) –  The film navigates the intimate lives of 5 brothers and their mother, as they experience the pains of exile and the joys of family bonding.

Yossi (2012) – Ten years after Yossi and Jagger, the tragic love story of two IDF officers serving in Lebanon, director Eytan Fox returns to find out what has happened with Yossi.

Yossi & Jagger (2002) – Yossi and Jagger, two army soldiers in the Israeli army, have a secret. When they walk off in the snow together, it isn’t because they’re on patrol–it’s because they’re lovers.