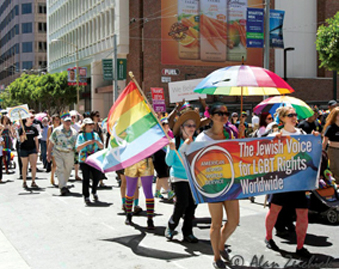 Something was different at the San Francisco Pride Parade this year: For the first time in the event’s 44-year history, Reform Jews from around the Bay Area marched as one. 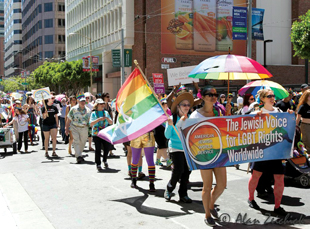 More than 150 people, representing some 20 congregations and various Jewish agenices, joined forces and walked together behind the Union for Reform Judaism’s banner during the June 29 parade.

The effort was organized by Rabbi Andrea Berlin of the URJ’s Western regional office and Alan Zeichick on behalf of the Religious Action Center of Reform Judaism.

“It massively exceeded expectations,” Zeichick said, noting there might have been more than 200 participants, but that counting was difficult. “We’re planning on doing this next year.”

They were joined by participants from Keshet, American Jewish World Service, Bend the Arc, InterfaithFamily, Shalom Bayit and the S.F.-based Jewish Community Federation, as well as other individuals.

“The idea came about because a number of synagogues in the Bay Area had historically marched by themselves in the parade,” Zeichick said. “Our idea was rather than give the message that a single synagogue supports LGBT, we should say that the Reform movement stands for something. It’s good for us and the non-Jewish community to see.”