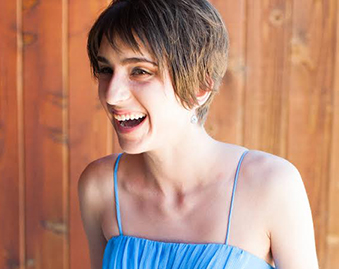 Our blogger Rebecca Levin just came back from A Wider Bridge’s 2014 Israel Mission, during which she was featured twice in the popular lesbian blog “Lezbelib.” Read her columns!

My name is Rebecca Levin and I am a Queer Jew living in Southern California. I am about to embark on A Wider Bridge’s 2014 Israel Trip to rediscover my roots as a Jew and to become more in touch with my queer identity. I’ll detail my journey both through A Wider Bridge and on Lezbelib. This is my story.

Until I entered Kindergarten, I thought that everyone was Jewish.

Yes, just like any six-year-old girl, I thought that my way of life was the only way. Going to synagogue was what everyone did. Saying prayers in Hebrew was totally normal, as was having the Sabbath day on a Friday night. All of this I reasoned, while my tiny brown eyes refused to see the five or so churches we passed on our way to services. Maybe it was the coke bottle glasses clouding my vision.

Harvey Milk. Judith Butler. Leonard Bernstein. Hell, even Peaches. There are, literally, scores of Jewish LGBT people across the globe. Famous or no, these LGBT Jews represent a significant portion of both the Jewish and LGBT populations. But our numbers aren’t the only thing that make us amazing. Many, like the few listed above, are singers, conductors, politicians, philosophers, and actors. It always amazes me when I see just how many LGBT Jews there are, and what we can do.

And me? Well…I’ve been running around for the past hour and a half attempting to pack for the next two weeks.