National LGBTQ Task Force Executive Director Rea Carey has no plans to resign in the wake of January’s protest at the annual Creating Change conference that forced the cancellation of a reception with two Israeli activists. 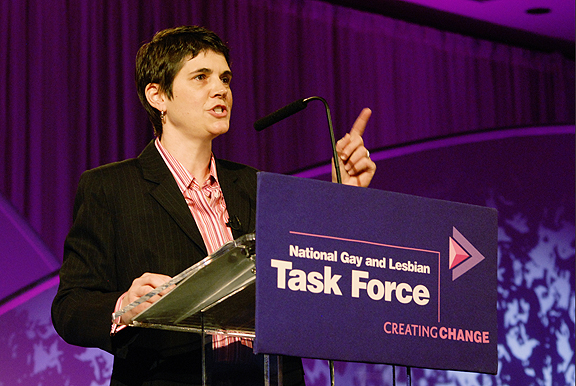 “There are a lot of opinions both from people who were and weren’t there,” Carey told the Washington Blade during an interview at the Task Force’s offices in Northwest D.C. on Feb. 25. “I love the work that I do and I’m not stepping down.”

Carey spoke with the Blade a month after more than 200 people opposed to “pinkwashing,” which they describe as the promotion of Israel’s LGBT rights record in an attempt to deflect attention away from its policies toward the Palestinians, protested the reception at the Creating Change conference in Chicago.

A Wider Bridge, an organization that seeks to bolster “LGBTQ connections with Israel,” organized the reception. Sarah Kala-Meir and Tom Canning from the Jerusalem Open House for Pride and Tolerance were scheduled to speak, but they left the room in which the gathering was taking place through a back door as protesters began shouting.

A Wider Bridge CEO Arthur Slepian told the Blade on Monday that he welcomes Carey’s comments on the Israeli government’s policies toward the Palestinians.

“That’s a good thing,” said Slepian. “It should not be the role of the National LGBTQ Task Force to have a policy position on the conflict.”

Dana Beyer, a member of A Wider Bridge’s board of directors, agreed.

“Our goal as LGBT organizations is to do the best we can for our citizens and for those elsewhere in the world who need our help and want their help,” she told the Blade on Monday during an interview. “We need to be concerned about their well-being, not the geo-political situations in which they live.”

Read the full story on The Washington Blade