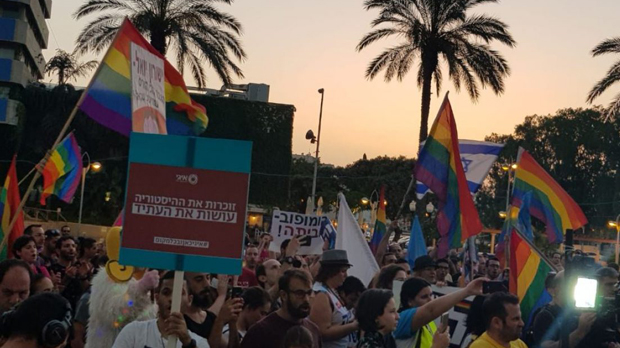 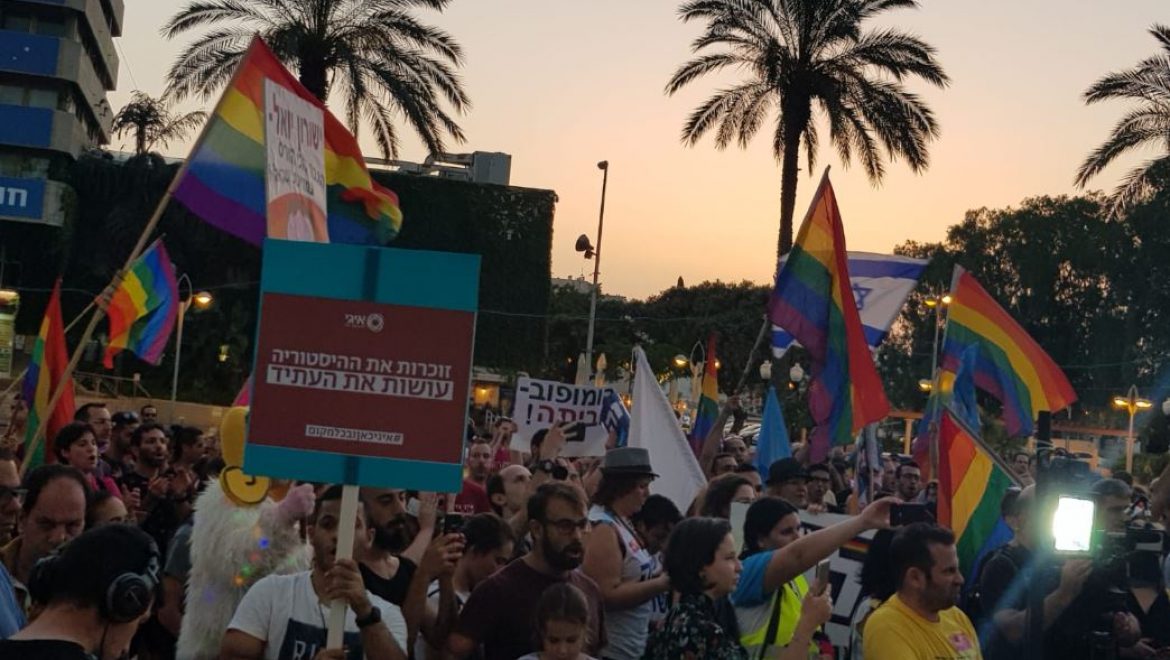 The rally was organized by the Aguda, Israel Hofsheet, the Reform Center for Religion and State, the Students Union in Israel, IGY, Maavarim and Hoshen. Protestors gathered in the plaza in front of the Holon Municipality building and carried signs that read “We are not second class citizens,” “Love thy neighbor as thyself,” “I am a human being” and more.

Various representatives of the organizations spoke on stage, and called for Yoel Yeshurun to be dismissed from every public role. Cars passing by the demonstration honked to express support.

At the end of the speeches some of the demonstrators crossed the road and continued the protest under the municipality building. One demonstrator was arrested by the police.

Chen Arieli, chair of the Aguda said: “We came to convey a clear and unequivocal message: If you can not hold responsibility for your mouth, you have no moral right to hold your chair! An apology is not enough for us, we are fighting for our principles, for our lives. In the country we want to live in, we cannot allow any of hatred or LGBTphobia statements being said. We do not want a Tel Aviv State, that only there we can live in security. Transgenders, homosexuals and sluts too should have a place in which they can live in security and in peace. Whether it’s in Holon or in any other city in the country. I call on the residents of Holon, the LGBT and the non-LGBT people, to influence with your voices and make it clear that if someone expresses this way, he should not have a place in the municipality, and you have the power to influence and end his political life. ”

Uri Kedar, director of Israel Hofsheet Movement, said: “In June 2018, the days in which a member of the ruling party holding a senior public official in one of the largest cities in Israel could attack the LGBT community in public, extract a stuttering apology and return to his daily routine, are over. Lesbians, trans, bisexuals and homosexuals, together with the supporters I am proud to be among, are no longer there, and the Israeli public is no longer there. What perhaps was something that could pass quietly before cannot happen anymore. Whoever wants to be an LGBTphobe in Israel of 218 has to understand it comes with a heavy public and political price. That it’s impossible to continue like this. Just as we will not tolerate any sort of violence against LGBT people, we will not tolerate any kind of violence towards LGBT youth. We demand that our elected officials be tolerant towards LGBTQ and straight people, towards Ashkenazi and Mizrahi people, towards Russian speakers and Ethiopians, Arabs and Jews. We must not accept this behavior towards any community in Israel. There is no other choice, here we have to choose sides. You are either with Yoel Yeshurun or with the gay community. There’s no middle here.”

MK Michal Rozin, a co-chairwoman of the LGBT lobby in the Knesset, said: “Yeshurun did not ‘fail in his language,’ but he publicly revealed his dark and violent positions. Whoever calls the LGBTQ community ‘bipedal animals, disgusting and repulsive’ does not need to apologize – but to hand over the keys and go home. Yeshurun and his colleagues are the ultimate proof of the great importance of my bill that passed yesterday in the Knesset, which will prohibit discrimination on the grounds of sexual orientation and gender in Israeli law. Wherever the LGBTphobia will raise its head, I will come together with Meretz party to fight it.”

Tamar Yahel, CEO of Hoshen said: “Yoel Yeshurun, have you ever thought about how the Holoni girl feels about your statements? Have you ever thought how deep into the closet crawls the boy when he is deprived of legitimacy and humanity? and how much suffering and pain have you added to so many LGBTs, including myself? For me, too, Holon feels less like home as long as you sit in your chair. This is not the Holon I love and I am proud of.

Holon, which I love, is the city that has held more educational activities of Hoshen in the past year than any other city in Israel. It’s the city that two years ago made sure to train the entire team of kindergarten teachers and municipal assistant teachers for LGBT tolerance and inclusion. It’s the city that opened its doors and heart this year and established a hostel for homeless LGBT youth. This is Holon, which I am proud of and will continue to fight for.”

Teenage girl Amit Tzahar, a member of IGY and a Holon resident, said: “I stand here today, a resident of the city and a representative of the Israel Gay Youth in Holon, and I am angry. I’m angry that time after time public figures exploit their voices to incite against our community, against us, the people who chose love. I’m angry that in my city, a city that promotes the place of acceptance, that has a distinguished group of strong community, and a group of youth working for social change, stands a deputy mayor who calls us “Gross bipedal animals, repulsive and deeply wounded.” I ask you, how long will an entire community can continue to experience violence in the public sphere? How many other insults of elected public figures will we have to absorb? Until when can we remain indifferent and silent? A whole youth public stands behind me. Strong and uncompromising youth. Youth who aspires to a better future and works for a better society. We are here to fight for our basic right, the right to human dignity and liberty. We are here to demand equality, and we will fight for a better future for us and for the generations to follow. We stand strong against the paralyzing fear and we call upon you, dear public: don’t give a hand to LGBTphobia. Do not remain indifferent, fight with us in this war, shine a light in places where darkness threatens to bring us all down. Stand behind us and prove that our proud youth will succeed to make a revolution.”