In a double-spread interview in Yedioth Achronot, Israel’s main newspaper, four members of Kehila Datit Ge’ah, the LGBT religious community, speak about the growing media storm over LGBT issues in the past weeks in Israel. The hate-speech of Rabbi Levinstein hit them hard, but on the eve of Jerusalem Gay Pride they’ve invited the rabbis to meet them and talk and stop fearing them. 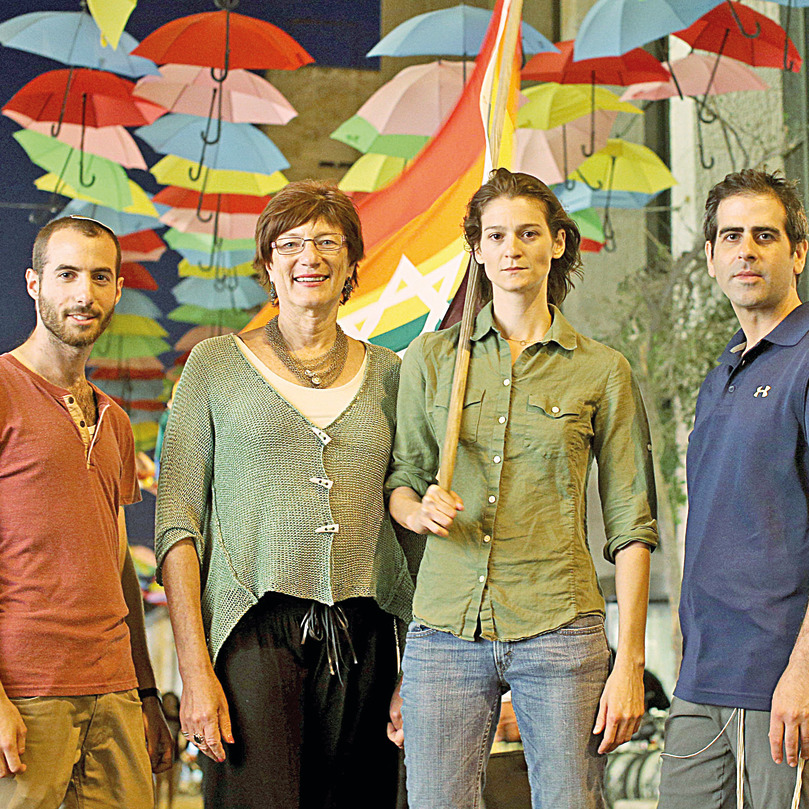 The interviewees were Nadav Schwartz, 34, a gay activist and co-organizer of Jerusalem Pride Parade, transgender Rabbi Yiscah Smith, 65, lesbian activist Sarah Weil, 34, and Moshe Grossman, 24, who serves as a guide for LGBT youth at the Jerusalem Open House.

Here’re the prominent quotes from the interview:

Nadav Schwartz:
“In recent days, people, and especially younger ones in the closet, call me feeling helpless and just cry. It’s not that there’s some sudden expectation to be embraced, but the feeling is that in recent days a dam of a sort was broken. And if to specifically address the words of Rabbi Yigal Levinstein, who teaches in this pre-army religious academy, which is a place that considers itself a leading recruiting academy, this army is the army of the people. How can you take responsibility for the soldiers, sending them into battle with such an educational charger in their case? What we heard last Thursday was distilled hatred, and specifically to hear it from an educator is something which is disappointing, because hate comes from ignorance.”

Moshe Grossman:
“I’m not worried about my students. I worry about those who can’t afford to be a student. Statements like this aren’t rare in religious education. They now receive attention because of the proximity to the parade, but religious LGBT teens hear them throughout the year. This is something that we, in our group, discuss all the time. We try to provide the tools and integrate durability into these words.

“I’m very concerned about those [in the closet people] who don’t have [durability] tools and have to cope with it alone. This is impossible to do. Not being able to talk about your difficulties with anyone while you get clear messages that everything is wrong with you, that all your essence is broken…no wonder people commit suicide.”

Yiscah Smith:
“As an older woman who already acquired a name for herself in the world and has security in her identity, the recent statements did not affect me personally, but they saddened me a great deal, because those words create a huge blasphemy. To see rabbis, people who have great power, use it to spread hatred and division among the people of Israel is heartbreaking. We have such a beautiful Bible, that suggests such beautiful ways to treat each other, and such a rabbi, who learned so much of the Bible, uses it to keep people apart instead of bringing them together … what good is his Torah?

“What is unfortunate especially in his words is the fact that they caused public rejection and disgust against the Torah. Young people who live authentic lives don’t need to feel shame and guilt about who they are. On the contrary, they should feel amazing! You are trailblazers. You have a real and honest way of living. This is something that is common in the world, and whoever is able to do it – is a strong person. The march, and our very living as ourselves, whoever we want to be, is a way to express an inner truth.”

Sarah Weil:
“The murder [of Shira Banki, Z”L] was for me a great trauma. Right after the pride parade last year I took a large rainbow flag with a large Star of David and simply walked alone. My goal was to hang the flag at the entrance to the party I organized, and I got to make my own private parade. It was my way of processing things. At that same private march cars honked at me, people shouted curses, called me a pervert, said I was repulsive. It was the first time I really felt unsafe.”

Since then, for a year, every Thursday Sara marches to Zion Square with flag, accompanied by professionals, and just lets the dialogue happen on its own. “This dialogue is not easy. Zion Square is a type of junction which channels all kinds of people who live in this town – religious, secular, chassidic, Arab, LGBT. My goal is to bring the discourse to them. The rabbis don’t allow the public to discuss these things? The public is afraid and doesn’t want to come to me to talk? So I come to talk to them.”