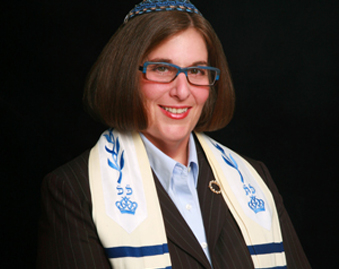 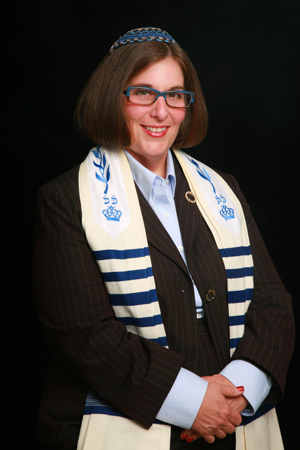 Rabbi Eger, who’s not only Kol Ami’s enthusiastic and charismatic rabbi but also is one of the founders of the congregation 20 years ago, has been an LGBT activist for many years. She’s the founding president of the Gay, Lesbian & Bisexual Interfaith Clergy Association and a past chair of the Task Force on Gays and Lesbians in the rabbinate. Other achievements of Rabbi Denise are being on the “Forward 50” list of the most influential Jews in North America, past President of the Board of Rabbis of Southern California, past President of the Pacific Association of Reform Rabbis and present-elect of the Central Conference of American Rabbis.

For the historic evening, many leaders and organizations paid a tribute and contributed warm words about Rabbi Eger, including University Synagogue’s Rabbi Morley T. Feinstein, who wrote: “Denise is known among her collegues for her passion and commitment, and she has always been a warm and welcoming rabbi to all whose lives she touches. Her heart is wide and embracing , and among our colleagues she’s known as a ‘rabbi’s rabbi’.”

“A true pioneer in the Reform rabbinate, you are the pillar on which congregation Kol Ami rests,” wrote Rick Jacobs of the Union for Reform Judaism, “a truly gifted leader within the ranks of North America’s Reform Movement, and a driving force in the nation’s LGBT community. In each and every one of your endeavors – from worship services on North La Brea, to CCAR committee meetings, to pride rallies in West Hollywood and Washington, DC – you bring God, Torah and holiness to your work and to our people.”

Among the organizations who paid tribute to Rabbi Eger include: HRC, AIPAC, Keshet, David Geffen Foundation,  Global Voice Broadcasting, LA’s Gay and Lesbian Center, Hillside, and many others.

Rabbi Denise L. Eger was raised in Memphis, TN.  She graduated with honors from the University of Southern California with a Bachelor’s Degree in Religion in 1982.  She received her Master’s Degree from Hebrew Union College – Jewish Institute of Religion in 1985 and was ordained as Rabbi in 1988 at the New York campus of HUC.

Eger is a noted speaker on the topics of human sexuality, GLBT issues and Judaism, AIDS, the changing Jewish Family, Spirituality and Health issues in Judaism and Politics, Progressive Judaism and the Radical Right.  Rabbi Eger has appeared on numerous radio and television programs.