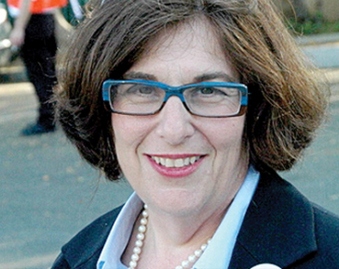 What does God require of you? Only to do justice, to love compassion and walk humbly with your God.

“It’s on my wall,” said Rabbi Denise Eger, pointing to the spot in her office where her favorite Bible verse is written (also transcribed on her tallit). “Prophet Micah, Chapter 6, Verse 8. It’s really a reminder of what our human tasks are.”

They are tasks she will have a chance to tackle on a large scale as the new president of the Central Conference of American Rabbis (CCAR), the largest and oldest rabbinical organization in North America. When she takes the helm of the 126-year-old Reform organization March 16, at age 55, she will be its third woman and first openly gay leader.

Meeting in the LGBT-friendly West Hollywood synagogue Kol Ami, of which she is the founding rabbi, Eger — a longtime activist on many fronts — said her goal as CCAR president is to make Judaism bigger, more accepting and more inviting.

“It’s also very meaningful for the rabbinate that we have elected our first openly LGBT president at a very historic moment in time,” he said.

In 1977, CCAR passed its first resolution calling for human rights for homosexuals, demanding the end to discrimination against members of the LGBT community. It later advocated for the ordination of openly gay rabbis and affirmed the right of a rabbi to officiate at an LGBT wedding.