Ramona Hernandez-Perez is a queer, female Black-Mexican rabbi with stories to tell. 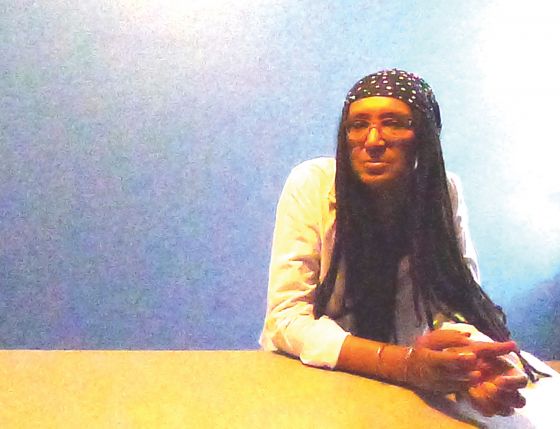 Hernandez-Perez is in her 60s and is a third-generation Chicago native. She was transgender and is now female, explaining while there is nothing wrong with being transgender, to her it means from one person to the next. Her transition, as she described, has passed.

“I don’t want to be a third gender,” said Hernandez-Perez. “I want to be female, period. I’m me.”

Mainly raised by her grandparents, Hernandez-Perez said her family was not religious when she was growing up.

“When you begin to find that these things come natural to you or that you have a love for it, then it just happens,” said Hernandez-Perez of finding a love for religion. “Baruch Hashem. Be a decent human being. Tikkun Olam [a Jewish concept, meaning to repair the world through acts of kindness]. Be that light, help to heal the world, whatever you are, whether you’re a journalist, a musician, an entertainer, whatever you are, you can be who you want to be and still be decent.”

Hernandez-Perez grew up in the civil-rights movement with Dr. Martin Luther King Jr., living around the corner when he had an apartment on Chicago’s West Side. She recalls getting involved by going to King’s rallies in Chicago and participating with the urban aspect of Southern Christian Leadership Conference ( SCLC ). Through that, when she was in high school, she stood as one of the leaders of the Coalition of High School Students, boycotting for better conditions.

When it comes to taking action on her beliefs, Hernandez-Perez credits the spark of Tikkun Olam.

“I don’t think I was ever not involved,” she said. “It’s just the right thing to do.”

While Hernandez-Perez is retired now. She served four years in the Navy, stationed in New York and during that time, went to naval legal justice school in Newport, Rhode Island. For more than 15 years she worked at University of Illinois at Chicago as a monographic copy cataloger, while also a part of women’s minyan at UIC’s Hillel House, where she first came out. She left UIC for a six-month study in Jerusalem through a joint effort by the Leo Baeck Institue and Hebrew Union College. She holds certificates in Jewish spiritual healing, is a para-chaplain and was ordained by Universal Ministries. When she returned from Israel, she went on to work for about 12 years at Northwestern University as a bibliographic editor. Continue reading on Windy City Times

This is an A Wider Bridge Midwest article