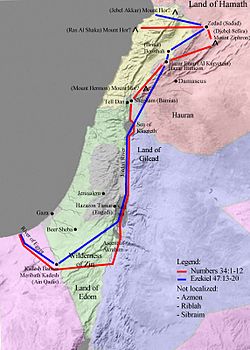 Lekh Lekha, Genesis Chapters 12:1-17:27, is one of the most pivotal texts in the Torah. It’s the text in which Gd speaks to Abram and tells him to go into the wilderness to the land that He will show. It is this passage that is at the crux of the dispute between Muslims, Jews and Christians. Who owns the land? To whom was it promised? Who has the rights to it?

The purpose of the Jewish Geography Project is to paint a picture of what our earliest Jewish ancestors looked like to challenge the notion of what a Jew looks like using Torah, the backbone of our faith, as a guide. We left our ancient people right around modern-day Turkey.

Abram was 75 years old when he listens to Gd and journeys towards the land of Canaan,  a large land mass that includes the modern state of Israel, portions of Jordan, Lebanon, Syria and Egypt.

We’ve traveled there from Haran, which is universally understood to be in modern day Turkey. Abram, Lot and Sarai travel through the land as far as the site of Shechem (Genisis 12:6) which is understood to be modern day Nablus, a city in Palestinian territories.  We are told in the same verse that The Canaanites were then in the land. According to archaeologist Jonathan N. Tubb, “Ammonites, Moabites, Israelites and Phoenicians undoubtedly achieved their own cultural identities, and yet ethnically they were all Canaanites” “the same people who settled in farming villages in the region in the 8th millennium BCE.”