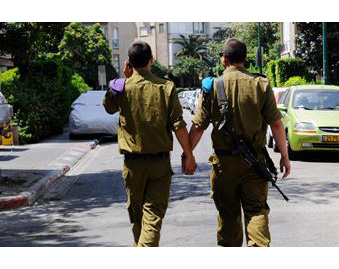 The Israel Defense Forces recently published an image of two soldiers in uniform holding hands. It immediately made headlines and provoked strong reactions, including excitement at the army’s gesture, disgust and opposition – even within the gay community – to what some perceived to be playing the “gay card” for public relations.

Eyal Goldberg’s wonderful film “Powder” also features a uniformed solider embracing his gay partner, but not in the same tranquil context. In the film – which won best debut film and best editing at the Docaviv International Documentary Film Festival and appeared at the international LGBT film festival TLVFest – the army is a source of anxiety, frustration and moral dilemmas. Leaving the army, it turns out, isn’t easy—not just bureaucratically, but also psychologically. There are social pressures, pangs of conscience, the sense of belonging mingled with that of not belonging and moral dilemmas on all sides.

The struggle over leaving the army, or staying in it, isat the center of the movie. Goldberg is repeatedly called in for reserve duty, and each times feels he no longer has the strength to continue. Against the backdrop of the little emotional deaths he undergoes on being called up, real deaths occur in his family. One after another, Goldberg’s father, grandfather and grandmother pass away, and Goldberg –along with the movie and its viewers – is tossed back and forth between the literal and metaphorical axes of death.

“The film was made over ten years, and it wasn’t an easy experience,” says Goldberg. “I started filming during reserve duty in 2001 and at first only filmed when I was called up to serve. At the same time lots of things started to happen at home in Metula. My first film, “Hamavri,” was about my family and the sense that its demise was growing more palpable. Part of the material I filmed during that time, which wasn’t included in the first film, made its way into the current one. My need to film stemmed from the desire to document what would soon no longer exist – my grandparents were ill and so was my father. At first I didn’t think this film would include my family. I assumed it would focus on reserve duty and the accompanying difficulties. But when I arrived in Metula during my service – at the time of the most recent Lebanon war – I suddenly realized everything was linked. So from then onward, I started filming my family again.”

In one of the scenes, you tell your friends in the reserves you’re gay. The scene is somewhat comical, maybe because it includes some very clichéd reactions, like “You don’t look that way” and “I don’t want people like that to be part of our gang,” and also because it doesn’t look like you’re at all bothered by the reactions. But do they reflect the wider reality? Have you encountered many similar reactions in the army?

“It’s complicated. What I find interesting is that alongside these sayings – which are very homophobic – the relationship between us, as friends, stayed warm and strong. Coming out of the closet gave me a lot of strength. When I started filming, I knew there’d be a moment when I’d tell them, and I thought this step would hasten my decision over what to do regarding the issue of reserve duty. I assumed after I told them I would no longer be able to continue in the reserves, the decision would be clear. But the opposite happened, and our relationship only grew stronger.”

Why didn’t you tell them earlier?

“It took me a lot of time to reach that place. You have to remember I meet them once a year, or once a month, so it’s very easy to feel it’s not particularly urgent to tell them at a particular moment. It actually happened as a result of the film.”

In one of the scenes, your mother says she is worried the film will be something like B’Tselem. Does the fear of automatically being labeled as another gay, leftist, Israel-hater concern you as well?

“I don’t think I was worried about that, but I did want to bring a greater level of complexity to the subject. When I started filming, I thought the very act of filming – which has an inherent active dimension that forces you to acknowledge things and deal with them – would bring up the dilemma of serving versus objecting. But it also made everything more complex. I didn’t want the film to be about a leftist, gay Tel Avivian who doesn’t want to go to the army, and I don’t think it turned out that way. I insisted on creating something more complex.”