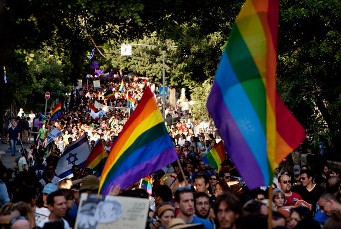 In June 2007, I marched in Jerusalem’s gay pride parade. To do so was a risk. A group of ultra-Orthodox rabbis had issued a hex on the event. “To all those involved, sinners in spirit, and whoever helps and protects them, may they feel a curse on their souls, may it plague them and may evil pursue them,” they declared ahead of the march. Two years earlier, a fanatical Orthodox Jew had stabbed three parade participants. And in 2006, a prominent Hebron sheikh had asserted that the parade was “a cancer whose objective is to destroy the Islamic nation through humiliating Jerusalem by demonstrating the perversions of gays and lesbians.” Gays serve an ecumenical purpose in the Holy Land: Extremist Jews and fundamentalist Muslims put aside their differences to join together in hating them.

Thankfully, no violence occurred at the 2007 parade, though hundreds of anti-gay activists lined the route shouting imprecations and holding hateful signs. “Go to a shrink,” one particularly blunt poster read. “Go Away. Your sickness should be healed, not flaunted,” declared another. Over 7,000 police and army officers protected the marchers, and snipers were placed on the rooftops of nearby buildings.

As the ugly reactions to the parade revealed, the vast array of rights that gay people enjoy in the Jewish state—which include serving openly in the military, adoption, domestic partnerships, and the recognition of marriages performed abroad—did not emerge from nowhere. These rights are the fruit of hard work on the part of many activists, gay and straight, who had to push for them against politically powerful, socially conservative elements. This ongoing fight for inclusion was manifested most recently in the creation of an LGBT faction within the Labor Party, supported by all the party’s Knesset members except for Arab-Israeli MK Raleb Majadele.

But the struggles of Israeli activists and the progress they’ve achieved are meaningless to some, including Sarah Schulman, professor, novelist, and self-described “active participant citizen.” In a New York Times op-ed published last week, Schulman argued that these advances in gay rights are merely a “potent tool” in the Jewish state’s “pinkwashing,” by which she means Israel’s “deliberate strategy to conceal the continuing violations of Palestinians’ human rights behind an image of modernity signified by Israeli gay life.” As evidence of this so-called pinkwashing, Schulman cited the fact that the Tel Aviv tourism board is spending $90 million on a campaign to market the city as “an international gay vacation destination.” For Schulman, Israeli Prime Minister Benjamin Netanyahu’s reference to the Middle East as a region “where women are stoned, gays are hanged, Christians are persecuted” in his May speech to Congress is yet another example of the sinister pinkwashing trend, also known in many quarters as diplomacy.

Schulman, a supporter of the Boycott, Divestment, and Sanctions movement, isn’t the first person to employ the phrase. In May, a writer for Time magazine alleged that Israel and Israelis’ participation in a series of international gay events was part of a coordinated campaign undertaken “in the hopes of redirecting [Israel’s] global image away from politics, terrorism and the occupied territories.” Joseph Massad, a professor of Arab politics at Columbia University, told Time that Israel launched this effort “to fend off international condemnation of its violations of the rights of the Palestinian people.” (Massad has written a book, Desiring Arabs, which alleges the existence of a nefarious “Queer International,” with supporters of Israel at its core, whose “discourse … produces homosexuals as well as gays and lesbians, where they do not exist” so as to paint Arab cultures as barbaric.)

The first fallacy of the pinkwashing meme is that it’s a non sequitur. No one is saying that Israel ought to be immune from criticism because it treats gay people humanely. Israel’s stellar record on gay rights does not prevent anyone from condemning the country’s settlement policies, its proposed ban on foreign funding of NGOs, or its lackluster effort to integrate Arab Israelis—issues that Israeli gay activists, many of them leftists, would gladly join Schulman in denouncing. But none of these failings renders Israel’s record on gay rights any less impressive, nor does touting that record constitute a covert method of justifying the occupation or racism against Arab citizens.

Schulman seems incapable of such discernment. “Increasing gay rights have caused some people of good will to mistakenly judge how advanced a country is by how it responds to homosexuality,” she wrote in the op-ed. While it would be foolish to judge a country’s “advancement” solely on the rights of gays, it is a telling standard. The protection of minorities is a bedrock principle of any liberal society, and it is an indisputable fact that sexual, racial, and religious minorities are better off in Israel than they are anywhere else in the region.

Though Schulman claims that, “pinkwashing … manipulates the hard-won gains of Israel’s gay community” it is Schulman who renders these gains meaningless. According to her, the victories of gay-rights advocates in Israel do not exist in and of themselves, but are cogs in a grand propaganda machine to legitimize occupation and oppression. The effort to create a more open and inclusive Israeli society is merely part of a broader PR campaign—undertaken, ironically enough, by the same right-wing forces who recommended I see a psychiatrist to cure me of my homosexuality—to fool credulous Western liberals into believing that Israel is something it’s not.

While accusing the government of Israel and pro-Israel activists of deceiving well-intentioned progressives, Schulman and her ilk are in fact using the issue of gay rights to forward an ulterior agenda. So consumed are they by hatred of Israel that they are willing to distort the truth about the horrible repression of homosexuals in the West Bank and Gaza Strip. If there’s any cleaning of dirty laundry going on here, it is Schulman’s whitewashing the plight of Palestinian gays.

Schulman’s assertion that homosexuality has been effectively “decriminalized” in the Palestinian territories since the 1950s when Jordan revoked colonial-era sodomy laws, will come as cold comfort to the countless gay Palestinians who have fled to Israel after being tortured or receiving death threats by Hamas or Fatah agents. Schulman’s claim would certainly come as news to Maen Rashid Areikat, the PLO’s ambassador to Washington. When asked earlier this year if homosexuality would be tolerated in a future Palestinian state, Areikat replied, “This is an issue that’s beyond my [authority].” Hamas strategist Mahmoud Al-Zahar was blunter. In comments directed toward Westerners, Al-Zahar told Reuters last year that “You do not live like human beings. You do not (even) live like animals. You accept homosexuality. And now you criticize us?” And whatever law might be on the Palestinian Authority books has yet to persuade the leaders of Aswat, a Palestinian lesbian organization, to relocate their headquarters to Ramallah from Haifa. By making the absurd claim that the issue of gay rights is being “manipulated” by the Israeli government, Schulman ends up making excuses for people who kill homosexuals.

Recognizing the enormous gap between Israel and the Palestinian Authority on their respective gay-rights records, critics of the Jewish state have gone to tremendous lengths to propagate a massive lie in order to win over Western progressives. This cognitive dissonance has driven ostensible intellectuals like Columbia University’s Massad to justify the oppression of gay Arabs, as he did in the aftermath of the 2001 “Queen Boat” incident in Egypt, when police raided a gay disco and 52 men were arrested, tortured, and put through a humiliating show trial. “It is not the same-sex sexual practices that are being repressed by the Egyptian police,” Massad wrote in Desiring Arabs, “but rather the sociopolitical identification of these practices with the Western identity of gayness and the publicness [sic] that these gay-identified men seek.” In a 2006 interview with the Advocate, Aswat co-founder Raudo Morcos complained about people who portray Palestinian culture as “backward” regarding its treatment of homosexuals. “What is backward? Backward to whom? Are we comparing the Middle East, the Arab community, to the Western world? This is not a fair comparison,” she said. But if Morcos and other advocates of the Palestinian cause genuinely believed in human rights then they would, without hesitation, acknowledge the suffering of Palestinian gays. It’s not mutually exclusive to criticize both Palestinians and Israelis.

Introducing the term “pinkwashing” into the mainstream debate about the Arab-Israeli conflict is edifying in at least one respect: It lays bare the delusion, paranoia, and cynicism of the Jewish state’s most earnest detractors. In their minds, any positive statement made about the country is necessarily part of a propaganda campaign in the service of a far-right agenda. For an increasingly large swath of the international left, there really is no good Israel can do, short of disappear.

James Kirchick is a contributing editor at Tablet, The New Republic and World Affairs.