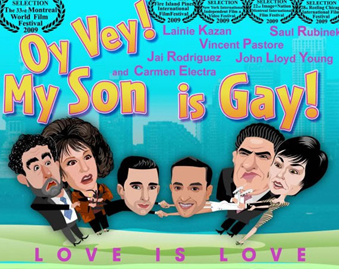 Breaking Glass Pictures is excited to announce the June 10, 2014 DVD release of the romantic comedy Oy Vey! My Son is Gay!

A romantic and inspirational family comedy, Oy Vey! My Son is Gay! is the story of a Jewish family coming to terms with their son’s non-Jewish, gay boyfriend. After coming out of the closet at a cousin’s wedding, Nelson’s (Lloyd-Young) parents Shirley (Kazan) and Martin (Rubinek) decide to have dinner with his live-in boyfriend Angelo (Rodriguez) and his parents. When the gay couple makes headline news after adopting a child, their families come to realize the true meaning of love and family.