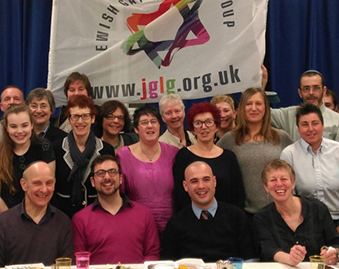 More than 55 LGBT Jews and their partners took part in the annual Jewish Gay and Lesbian Group (JGLG) Seder.

Led by Student Rabbi Daniel Lichman, who brought along his own ‘Chazan’ in Robin Samson, it was Daniel’s first time leading the seder, which used both the specially created JGLG Haggadah and the Liberal Haggadah as a guide.

The service included a wide-range of music – everything from Disney and West End musical adaptations, to more traditional Pesach music, alongside reflections on faith, humanity and both the work that’s been done, and still has yet to be done in the wider LGBT community.