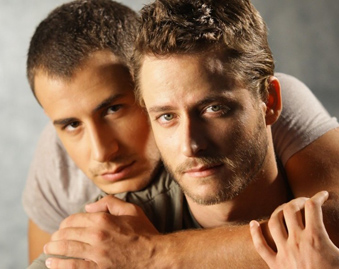 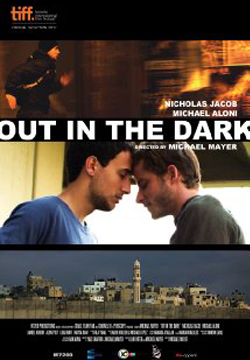 Taking great risks, a handsome young Palestinian named Nimr sneaks out of his home in Ramallah one night, climbs over a fence, and dodges police just to go to a gay bar in Tel Aviv. There, he meets a dreamy lawyer named Roy and the two hit it off. Nimr, studying for his masters degree in psychology, has a partial student visa for Israel and hopes eventually to continue at a university in the U.S., but his more radical older brother Nabil wants him to break all ties with “the enemy” country. Roy has it a bit easier, able to be out to friends and family and not gazed on with suspicion by others. Together, they try to build a relationship, but the hazards of where they live and where they are from threaten their happiness.

As outside forces impinge—a friend of Nimr’s is beaten and Roy’s parents aren’t particularly welcoming of their son’s new boyfriend—Out in the Dark dramatically conveys the difficulties of a cross-cultural love affair when the cultures are virtually at war with each other. When Nimr’s family finds out about Roy, the tension ratchets even higher, and the lovers must consider desperate measures in order to stay together.