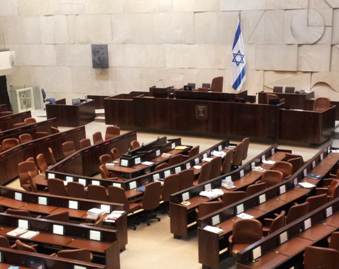 The last Knesset earned a great deal of praise for being liberal, especially due to the absence of the orthodox parties in the coalition. In practice, the results of a study published Monday by the Aguda indicate an opposite and worrying picture – most of the 19th Knesset members failed to stop their activities against LGBT discrimination in Israel and even acted against it.

According to the report, 55% of the MKs failed to work in stopping discrimination against the LGBT community, and 29% of the Knesset Members even worked to perpetuate the discrimination.

Oded Frid, CEO of the Aguda, the Israeli National Task Force: “Although the image of the 19th Knesset was liberal and progressive, our new report clearly demonstrates that the MKs failed to advance Israel to come into line with the liberal western world which supports and ties into the law full equality for the LGBT community. Knesset members, whose job is to represent the positions and will of the people, failed in this role also, as opinion polls conducted in recent years indicate that the absolute majority of the Israeli people supports full equal rights for the LGBT community. I urge voters in the upcoming elections to examine the activities of members of the Knesset and vote accordingly. We must put an end to discrimination.”

From its inauguration day to the day that the dissolution was initiated, 20 months, members of the 19th Knesset initiated 3000 bills, 30 of which were related to the LGBT community, and only one bill (by MK Dov Hanan) has completed the legislative process. It is important to emphasize that despite the common perception that the community has equal rights, discrimination against the community still exists in the law. The Israeli legislature refuses to recognize friends and members of the LGBT community as equal-rights citizens of Israel.

The Israeli National LGBT Task Force saw fit to point out the actions of five politicians who most significantly helped to stop discrimination against the LGBT community, including the activities of the former health minister, MK Yael German, and the vote of Prime Minister Benjamin Netanyahu in favor of the surrogacy law.

At the same time, the Israeli National LGBT Task Force points out five actions and statements of politicians who harmed and damaged the fight to stop discrimination, including the activities of the Chairman of the Jewish Home, MK Ayelet Shaked, against pro-LGBT legislation in the Knesset, and the offensive remarks of former education minister, MK Shai Piron against same-sex families.

The Aguda’s Otzma (‘Power’) Report is prepared for every Israeli Knesset after its dissolution, before the elections for the next Knesset. It examines the work of the Knesset for the LGBT community in Israel. The report is named after Otzma, the historical political branch of the Aguda when it was first initiated 40 years ago.

The Otzma Report researched the public data that appears on the Knesset’s website, billing and parliament work of Knesset Members who are not ministers, initiating bills and voting for them, and the use of the parliament’s tools.

The Aguda promises to continue to examine and publish the parliamentary work of the Knesset Members until full equal rights for the LGBT community is achieved.