Helen Elbaum, an orthodox mother, moved the entire Israeli public with her speech in her son’s gay wedding. Rabbi Binyamin (Benny) Lau, a famous orthodox rabbi, came to congratulate: “the idea that two people seek to enter into a marital union is, in my eyes, a rescue from death to life,” he said. 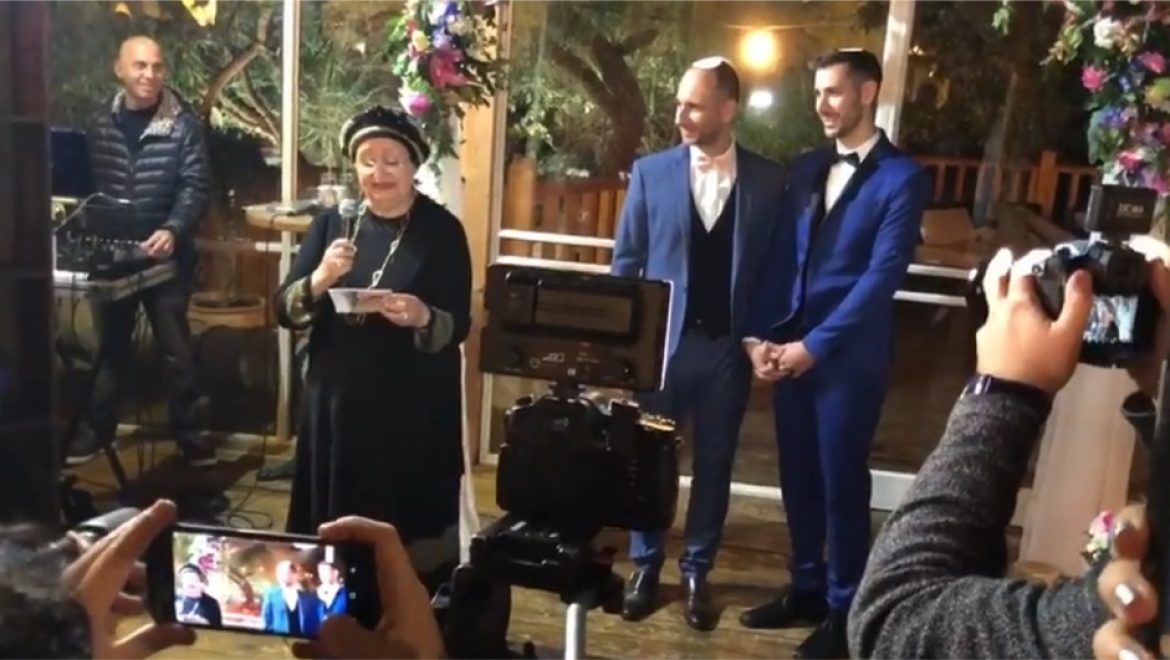 Earlier this week, Haim Elbaum and Yair Strauss, an orthodox Jewish couple, got married. The emotional wedding of the two soon became a daily conversation in every home in Israel, mainly thanks to the speech delivered by Haim’s mother that went viral on social media and reached the news.

Helen’s speech shed a light on a different, much more accepting, attitude of people within the orthodox community towards LGBT people in general and LGBT couples in particular.

“When Haim came to tell me the first time he was gay, he asked me to sit down and put a packet of tissue on the table,” Helen said in her speech, “but I didn’t need the tissue, because a mother is a mother, and I already had the feeling. I accepted Haim with love, even though I’ve had a different dream, about an ordinary life for him. Comes G-d and says to me: ‘I created Haim differently, but he is my son just like all my other children. He will find his partner, his life partner.’

“Nothing bad comes down from above, even if we don’t always understand. And the ways of G-d are mysterious. And that’s okay. It’s all in his order, of the Holy One, Blessed is He. And his will will be done.”

The respectable Rabbi Benny Lau attended Haim and Yair’s wedding as well. He came straight from his vacation to congratulate the couple. In an interview with the orthodox Jewish website Kipa, Rabbi Lau explained why he attended the wedding.

“A relationship stands on its on even before the holy matrimony,” explained Rabbi Lau, “according to my inner language, because it’s not good for a human being to be alone, living with a partner is, in my eyes, critical to life itself.”

Rabbi Lau explained that he still does not think there’s room for wedding ceremonies between two partners of the same sex, but at the same time he thinks it’s important to encourage members of the LGBT community to find partners. “The status of kiddushin (Jewish wedding ceremony), as we know it from the beginning, is a status of a woman and a man and the divine spirit between them. I do not know how to decipher this spiritual significance to a connection between a man to another man, so I place the status of such weddings aside, not participating and of course not officiating. But the idea that two people seek to enter into a marital union is, in my eyes, a rescue from death to life, no less. To live alone is like a death sentence and everything must be done to avoid this death. ”

In the interview, Lau was asked if he would recommend a person who come to consult with him and ask whether to go to the wedding of a LGBT family member, he answered: “yes, and that’s exactly what I did.”

Zehorit Sorek, a member of the orthodox LGBTQ community also attended the wedding.

“The presence of Rabbi Benny Lau, even if it was very short, was significant for activists and members of the orthodox LGBT community and has a real symbolic flavor,” Zehorit said. “The event, with all that happened, and especially the arrival of Rabbi Lau, proved that a change in the religious community in Israel is currently happening, and that the road to acceptance of LGBT people in the orthodox community was cut short. I hope that following Rabbi Lau’s boldness, other rabbis will join the wave of support and acceptance that is growing in the LGBT orthodox community. ”