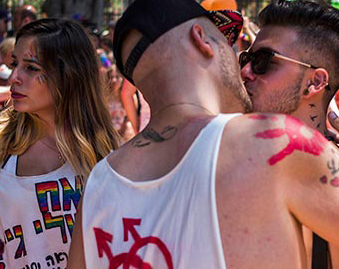 New research suggests there are 10 times as many bisexuals in Israel as gays and lesbians.

A new study of sexuality in Israel, portrayed as the first of its kind, reveals that a significant number of people in the Jewish state identify on the bisexual spectrum.

According to this new survey by the Israeli website Mako and the Panels Institute of several hundred secular Jews living in Israel, 67 percent of participants identified as “exclusively heterosexual,” while only 3 percent said they were “exclusively homosexual.”

The answers from the remaining 30 percent said they identified as being in between being exclusively heterosexual or homosexual.