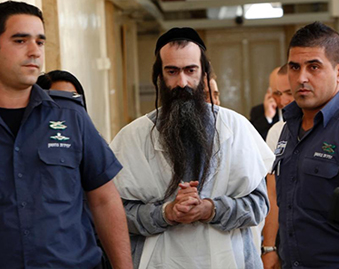 The stabbing at the Jerusalem Pride March, the violence against churches in Israel, and much of the “Jewish terrorism” directed against Palestinian families in the West Bank have one thing in common. They are being perpetrated by people who have no respect for the State of Israel, its government, its democratic institutions and the rule of law. When Yishai Schlissel, the religious zealot who stabbed six people at the Jerusalem Pride March, was brought into court he said to the judge: “You have no authority to adjudicate according to the holy Torah, and so I am not interested in participating in this illegal performance, not on my own and not via a representative.” When the Shin Bet took Meir Ettinger and another young radical Jew into custody for their alleged role in the firebombing of churches and attacks against Palestinians, sources in the Shin Bet were quoted to say: “they seek to attack Palestinians as part of their vision of overthrowing the Israeli government and replacing it with a Jewish kingdom.” Ettinger himself has written that there are “lots and lots of Jews, many more than one might think, whose value system is very different than that of the High Court of Justice or the Shin Bet, and the laws that bind them are not the laws of the state … but rather laws that are much more eternal.”

We are very focused on the attacks on Israel from the BDS movement that are really an attack on the legitimacy of the state of Israel itself. But as we confront the threat of “delegitimization” that comes from outside — from Israel’s detractors around the world — we must also confront the threat of delegitimization that is brewing within Israel itself, from a small but growing and dangerous movement whose vision for the future is not of a Jewish and democratic state as described in Israel’s Declaration of Independence, but of a Messianic Kingdom in which there is no place for Arabs, Christians, Reform or Conservative Jews, LGBT people, or anyone who does not share their particular and radical interpretation of Torah.

We are proud of the progress that LGBT people have made in Israel, progress that has been facilitated by the country’s democratic institutions including the court system, by an open media, and by a commitment to the pluralism that is embodied in the Declaration of Independence. So we must be especially vigilant when Jewish movements arise that espouse a radically different and extremist view of the future of Israel. We are surrounded by deadly examples from other faiths of what happens when extremist groups are allowed to grow without a forceful challenge from the more moderate voices in those communities. We must work to ensure a different future for Israel and the Jewish people.

On this page we will publish pieces by various authors exploring this topic.

Two Families, Three Deaths, One Way Forward
By Rabbi Sue Levi Elwell, Jewish Exponent
August 20, 2015
“How can we love in the shadow of hate? Each new year, we are challenged to choose life. Our tradition invites us to acknowledge our own fears of death when we sit with the bereaved. This is how we choose life.” Read the full article

Israel’s Threat From Within
by Richard J. Rosendoll, The Huffington Post
August 14, 2015
“Engagement is needed, not boycotts. The deadly attack at Jerusalem Pride led to a meeting last week between LGBT activists and members of the ultra-orthodox Haredi community from which the attacker sprang.” Read the full article

On Extremism and Control of Bodies
by Joshua Tranen, Guernica
August 7, 2015
“Watching these two events unfold, and listening to the seemingly tone-deaf commentary of Orthodox acquaintances on social media, I feel, if not responsible, then implicated in the murders of Shira and Ali.” Read the full article

What Have We Done?
by Benjamin Ellis, Jewish News UK
August 5, 2015
“The blood smeared on the pavements of Jerusalem cries out to us. A child is dead and our hearts are broken. Sixteen years old, a life barely begun. Darkness in the city of light. And so we ask ourselves: What have we done?” Read the full article

No More Condemnations; Jewish Terror Requires Action
by Nachum Barnea, Ynet
August 2, 2015
The two hate crimes which shocked Israelis over the weekend drew condemnations from all parts of the political spectrum, but it’s unlikely there will be any action to prevent the next attacks. Read the article