Luxury retailer Nordstrom Inc. has jumped into the controversial gay marriage debate by openly supporting the rights of gay and lesbians to marry. 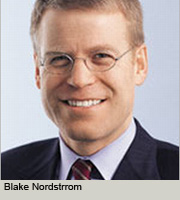 Company president Blake Nordstrom sent a companywide memo — co-signed by brothers Erik and Pete, also executives at the retailer — laying out the retailer’s “philosophical approach” to business, which includes a workplace where “every employee is welcomed and respected.”

Nordstrom already offers domestic partnership benefits to same-sex couples, and sexual orientation is included in its anti-discrimination policy. Now the company is going further still. “We feel the next step in this journey is to now support freedom to marry, also called marriage equality,” Nordstrom wrote in the memo. “We gave this thoughtful consideration and felt the time was right to come out in support of this civil rights issue.

“It is our belief that our gay and lesbian employees are entitled to the same rights and protections marriage provides as all our employees,” the memo continues, adding that “the decision is consistent with our long-time philosophy of inclusivity and equality.”

Read the full article on The LA Times