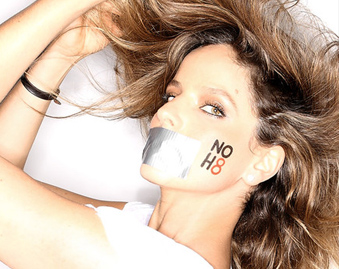 Member of Knesset Miri Regev, celebrity publicist Rani Rahav, TV producer Moti Reif and other Israeli celebrities will take part in the Israeli version of the International NOH8 campaign against hate, which will be produced by the Aguda, the Israeli National LGBT Task Force and will be led by Noa Tishby. “This day is intended for all the Israeli population and aims to eliminate violence and LGBT-phobia,” said Shai Deutsch, chairman of the Aguda.

After conquering America and recruiting thousands of celebrities, the international campaign against hate arrives in Israel too. The NOH8 campaign will be produced by the Aguda and will be shot by the orginial team from the American campaign. The campaign opens May 17 – International Day Against Homophobia and Transphobia (IDAHO).

“Bringing the  global campaign to Israel testifies more than anything to changing social norms,” ​​says Noa Tishby (in the picture below). “I was amazed at the response and  the effects of the campaign in the United States from celebrities and from the general public that rallied to the fight against hate. I’m glad that the LGBT Task Force has picked it up in its general struggle against hatred, ignorance and discrimination.” 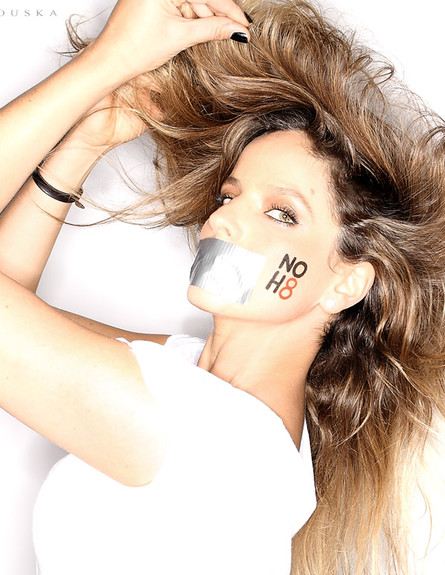 Among the celebrities who have confirmed their participation and will lead the campaign are actress Noa Tishby, Israel’s 2013 beauty queen Titty Aeinao,  advertising manager Ayalon Zarmon, producer Moti Reif, MK Miri Regev and many others.

“IDAHO day is a very  important day for the LGBT community, mainly because it is not even meant for the community itself, but for the wider community,” said chairman of  the Aguda Shai Deutsch (in the photo below). “This day is intended for all the Israeli population and aims to eliminate violence and LGBTphobia . This is the reason why we chose this year to join the international campaign: “No to hate”,  supported by leaders and influential personalities as well as community members, to gain  great public exposure. ” 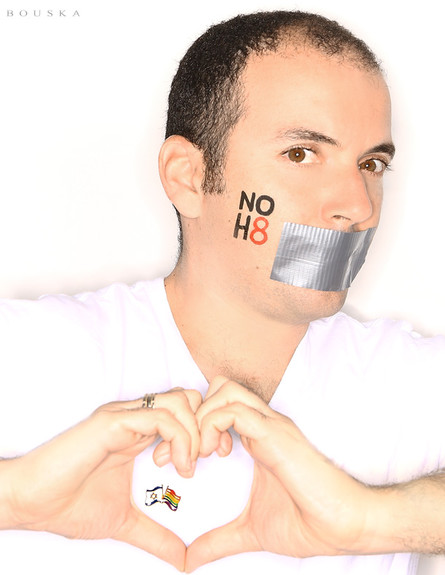 Sharon Jaegermann, who’s responsible for External Relations in the LGBT Task Force, adds that the campaign is a direct result of the need to heal the occasional hatred incidents in Israeli society. “In this time, we need to encourage understanding and respect for others. Many familiar faces are taking part in the campaign from a broad spectrum of activities. But the general public is also called on to join the campaign and make  a clear statement against hate. In 2009 we experienced a murder that shocked the state of Israel, the murder in Barnoar. A murder is a murder and was motivated by hatred that must be condemned  by  a society that aspires to be free. ”

Noh8 campaign was first launched in the U.S. on November 4, 2008, after the State of California passed Proposition  8 for a constitutional amendment which prohibited the possibility of marriage between people of the same sex. This decision provoked the wrath of the LGBT community around the world, and as a response to the approval of the amendment  , the “silent  protest” campaign  was born by fashion and celebrity photographer Adam Bouska and his partner Jeff Prestley. Duct tape on the mouth symbolizes the silencing of community rights by the law that was passed in California.

The Israeli campaign is open to the public, and the cost of having your official campaign picture taken is NIS 100. Portion of Proceeds to Benefit the Nir Katz Center for LGBT Violence Prevention. The Nir Katz Center was launched in 2012 as part of the anniversary of the shooting in Barnoar and aims to be a platform available for reporting and handling complaints against LGBT-phobia  cases.