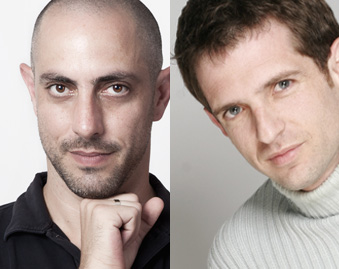 Niv Sheinfeld and Oren Laor are stage artists that have been creating together since 2004. In their work, they combine elements of contemporary dance with elements of performance-art and physical theatre, and received both national and international acclaim.

Niv Sheinfeld (1972) danced for 5 years in the Liat Dror & Nir Ben-Gal Dance Company, and for the last 13 years creates as an independent choreographer. Sheinfeld had been creating works for the Kibbutz Dance Company, Bat Sheva ensemble and others, and received 2 major awards for his work: the choreography award from the Israeli Minister of Arts in 2007, and the prestigious “Rosenblum award” for performing arts in 2009.Sheinfeld also teaches dance and creation in the School of Visual Theater in Jerusalem, Suzanne Dellal center in Tel Aviv and others.

Oren Laor (1971) studied theatre and performance at the Tel Aviv University between 1993-1997. During this time he has worked with highly praised theatre directors such as Yvgeny Arye, Edna Shavit, Nola Chilton and Yossi Israeli. Laor’s theatre training led him to focus on independent creation, and from 2004 he’s been creating contemporary dance works together with Niv Sheinfeld. Since 2009 Laor is a member of the artistic committee of Tmuna Theatre in Tel Aviv. In addition, he gives workshops for professional practitioners, combining different methods and techniques of performance and movement.