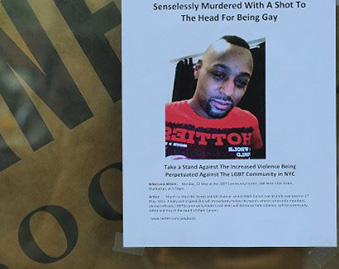 As the Big Apple struggles to come to terms with the murder of a gay man in Greenwich Village on Saturday, an uncomfortable question emerges: Are Americans less tolerant of gay lifestyles than the recent spate of same-sex union legislation indicates?

Greenwich Village, the trendy New York neighborhood which many artists call home, has witnessed its share of historic victories for gay rights advocates. That legacy has given the neighborhood its reputation as a tolerant safe haven for the gay community. Until now, that is.
Early on Saturday morning, Marc Carson was walking with his companion on Sixth Avenue at Eighth Street – not far from the Stonewall Inn, the site of the famous 1969 gay rights riot – when a man approached the couple and uttered an anti-gay slur.

The assailant then asked if the two “want to die here” before shooting Carson point-blank in the face. Carson, 32, was rushed to the hospital where he died of his wounds.

The killer, identified as 33-year-old Elliot Morales, fled the scene, but was quickly apprehended by police. Morales appeared on Sunday in Manhattan criminal court, where he was charged with committing murder as a hate crime. He is being held without bail and two of his companions are cooperating with police, The NYPD said it is investigating possible links between Saturday’s killing and other incidents.

Read the full story on RT