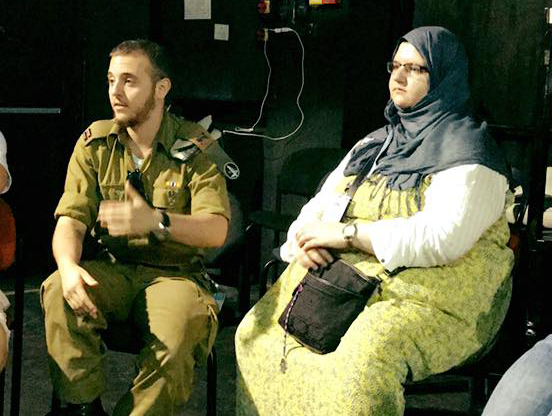 On June 24th, 2017, three Jewish women were evicted from the Chicago Dyke March. Their crime? Carrying a rainbow flag emblazoned with a Star of David.

March organizers say the flag was making people feel “unsafe.” The women were aggressively questioned about their beliefs, and then kicked out of the March for daring to say they were not anti-Israel. It did not matter that these women also support an independent Palestinian state, it did not matter that the suppression of proud Jewish identity made these women feel unsafe. To the Dyke March, these women were evil racists for not wanting Jews forcibly removed from their indigenous homeland, again.

The Dyke March organizers claim they are not anti-Semitic because they welcome anti-Zionist Jews. And I’m sure a White supremacist who has a Black friend would sympathize with those feelings. However, removing Jews because they are displaying Jewish symbols is inherently anti-Semitic. Now the Dyke March has changed their story, fabricating lies about the women, claiming they were being disruptive and picking fights. I know one of the women personally, Laurie Grauer. She and I both work for A Wider Bridge, an organization that brings Israelis and Americans together to fight for LGBTQ rights. Laurie was in tears due to the hateful actions of the Dyke March organizers. She was not being disruptive. She was simply being unashamed to be openly Jewish and Queer, holding her flag.

The Dyke March and its supporters have been conducting a smear campaign against A Wider Bridge, claiming we are “pinkwashing.” What is “pinkwashing”? As I have stated before, “Essentially, it’s the idea that Israel’s only identity is defined by the Israeli-Palestinian conflict. It’s the idea that speaking about gay rights in Israel, the struggles and the successes, is simply a distraction from the conflict. It’s the idea that Israel markets the achievements of the Israeli gay rights movement in order to make Israel attractive to the West. The accusation of “pinkwashing” is a common tactic used by the anti-Israel movement to silence gay Israelis, negate their struggles, spit on their successes, and turn LGBTQ people against the only state in the Middle East where they would not be treated as criminals.”

I can say with complete certainty that A Wider Bridge does not pinkwash. We simply want Israel and LGBTQ Israelis to be treated fairly. Our motto is “Equality in Israel, Equality for Israel.” The former means that we support, financially and otherwise, the Israeli LGBTQ movement. We support organizations such as Israel Gay Youth (IGY); Ma’avarim, the transgender community organization; Beit Dror, an LGBTQ youth shelter; and the Israel HIV/AIDS Task Force, to name a few. We bring them to speak in the United States about their organizations’ work, and connect American LGBTQ people and allies with Israelis striving for the same goals. We have them share their personal stories with Americans.

The latter means that we aim to dispel anti-Israel propaganda within the American LGBTQ movement. Israel is singled out and targeted by the American LGBTQ movement, often propelled by lies and anti-Semitic propaganda, and the effects of this hatred negatively impact LGBTQ Jews and Israelis. We try to bring a more balanced narrative to the table. During our LGBTQ Mission Trips, we visit both Tel Aviv and Ramallah, Jerusalem and Bethlehem. We go to the Knesset and a Palestinian refugee camp. We talk to liberals and conservatives, Arabs and Jews. We want to provide a wide array of views and experiences so that participants can draw their own conclusions about Israel and the conflict, among other things. We are against a one-sided, Israel-is-evil-and-must-be-destroyed message. We are against the co-opting and exploitation of the American LGBTQ movement by anti-Israel activists. We want Israel to be treated as the complex, diverse country it is, and her people to be treated with respect, even in times of disagreement.

We want to prevent anti-Semitic incidents like the one at the Chicago Dyke March, and many others. We want all LGBTQ Jews, regardless of their political or religious views, to be included and accepted by the American LGBTQ movement. A person should not have to choose between their sexual identity and their religious identity, which for many Jews includes Zionism. A truly intersectional and pluralistic movement recognizes this. We’re not saying, “Look how great Israel is, it can do nothing wrong, la la la la Tel Aviv Pride!” We’re saying, “Israelis are fighting for the same things as we are. Let’s work together.”

This is not “pinkwashing.” This is humanization of Israelis. And that’s what scares anti-Israel activists the most. If you humanize someone, it’s much harder to hate them. The narrative becomes more nuanced and complicated. Deeply-held beliefs are questioned. If you paint someone as a monster, anything you do to them is justified.

We have reached out to the Chicago Dyke March organizers for a dialogue with a demand of an apology. You can sign the petition here.

We at A Wider Bridge believe in humanization, cooperation, and coexistence. The Chicago Dyke March organizers appear to believe in discrimination and exclusion in the name of “justice.” I’ll let you decide which side you’d rather be on.