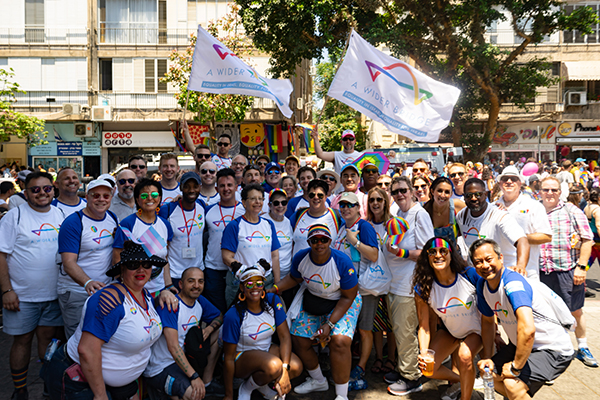 Mission Alumni will join our growing Beyond the Bridge Network, committed through their leadership to advancing equality in Israel and equality for Israel in their local communities. 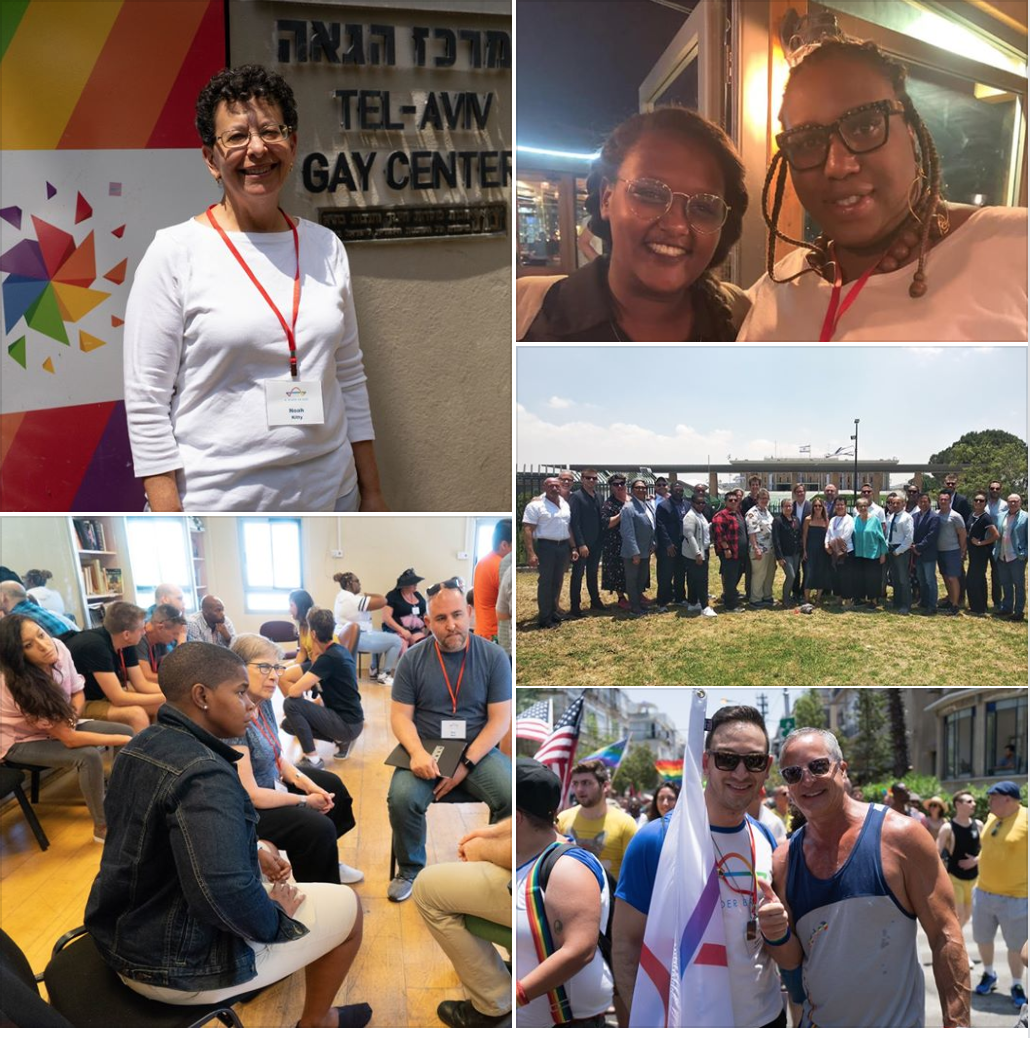 We’re proud to be a part of the Schusterman Family Foundation’sPride and Progress audio series,  along with our Israeli partners. Listen below!

This month, we commemorated 50 years after the Stonewall uprising. To mark the occasion, Ha’aretz spoke with Jewish LGBTQ activists – including Tyler Gregory. Read article.

Please join us in warmly welcoming Julianna Jackson and Jake Miller to the AWB family as Summer Fellows. Jake is a Biochemistry and Jewish Studies double major at Vassar College and founded the VOICES pro-Israel on-campus community. Recently graduated, Julianna specialized in International Relations and Religious Studies at Western Washington University, where she served as a pro-Israel advocate.

“As a bisexual Jew in the Pacific Northwest, I have often felt at odds with my identities as a Jewish Israel advocate and a queer woman. I am very excited to begin working with A Wider Bridge to ensure that others feel like they do not have to choose between the multiple parts of what makes them who they are.” – Julianna Jackson

“As a queer Jew, I’ve never felt truly safe outside of urban areas in the US and Israel. That’s why I’m so excited to join the AWB team: to ensure Israel and the US remain safe places for queer folk, like me, continue not just to exist, but to thrive.” – Jake Miller

In early June, we led the national mobilization against the DC Dyke March leadership’s antisemitic and anti-Zionist decision to ban Jewish and Israeli symbols at their June 7th march. Forming a coalition of feminist, LGBTQ, and pro-Israel organizations, we issued a joint statement against the ban.

“The DC Dyke March should know better than to stoke the flames of division and pain by driving a wedge between Queer Arabs and Jews at a time we must stand united against homo- and transphobia, anti-Semitism, and Islamophobia. We hope that they will do better––for the sake and advancement of all of our communities.” Read our full statement.

Due to our mobilization, the Human Rights Campaign and the National LGBTQ Task Force both condemned this ban, and the Task Force withdrew their sponsorship of the march. We also mobilized our Mission Alumni to speak out against this ban, including a Washington Blade Op-Ed by Julie Tagen, the Chief of Staff for Rep. Jamie Raskin. 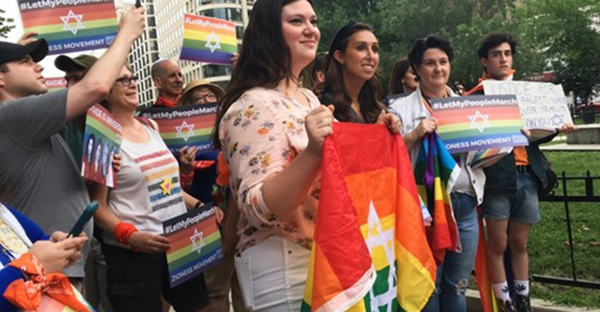 Members of our coalition arrived at the DC Dyke March with Jewish pride flags and after a discussion, were eventually allowed to participate.

We mobilized against the anti-Semitic, anti-Israel and homophobic remarks of the owner of Cheers, an LGBTQ bar slated to open this summer. Working with MN State Senator/AWB Mission Alumni Scott Dibble and local Jewish leaders, we rallied the community to condemn the bar owner. 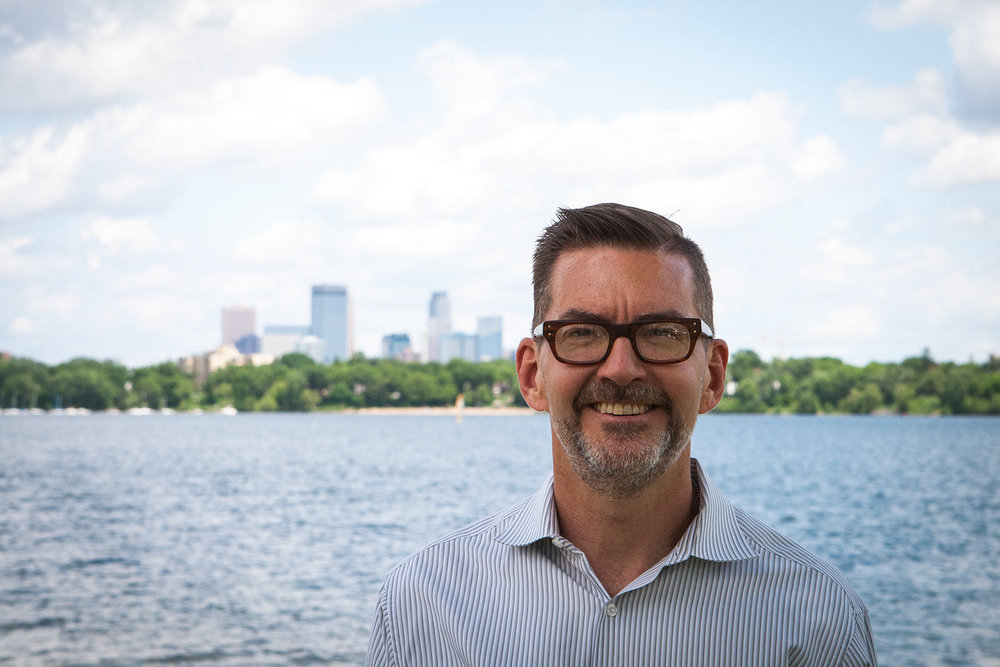 “If this so-called “gay bar” being opened by a non-LGBTQ avowed anti-Semite does manage to open, I will never be a patron. I hope others will not be as well. I encourage folks to join to the gathering outside of it on June 21 on its purported opening day.” – Scott Dibble

We partnered with the Consulate General of Israel in New York to mark the 50th Anniversary of Stonewall via a Pride Reception at Ambassador Dani Dayan’s home. We were honored to have the following people speak at the event:  AWB’s Board Chair Alan Schwartz, BWB’s Executive Director Tyler Gregory, Honorable Christine Quinn, former Speaker of the NYC Council and gay Knesset Member Eitan Ginzburg. 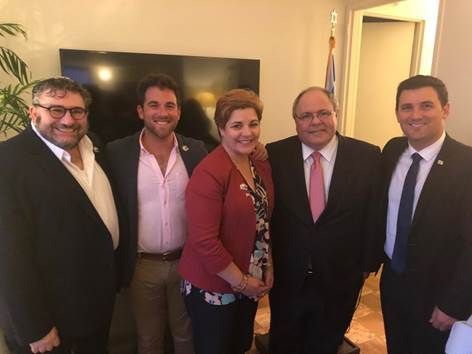 We proudly marched in World Pride with our AWB contingent and the Israeli Consulate, commemorating #Stonewall50 and celebrating our LGBTQ communities! 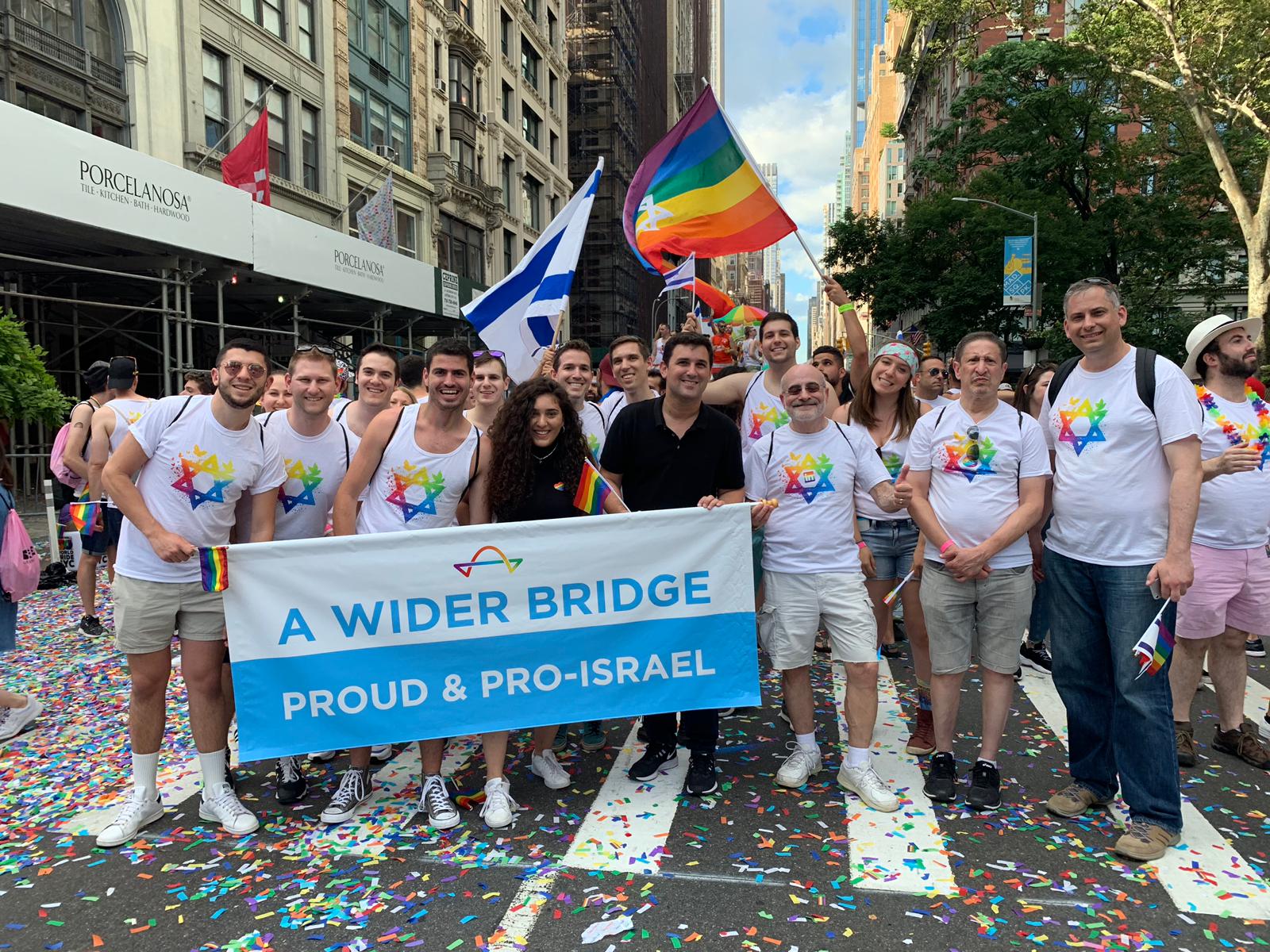 On June 2, we marched with the LGBTQ Jewish and allied contingent in this year’s NYC Celebrate Israel parade, the world’s largest pro-Israel gathering. 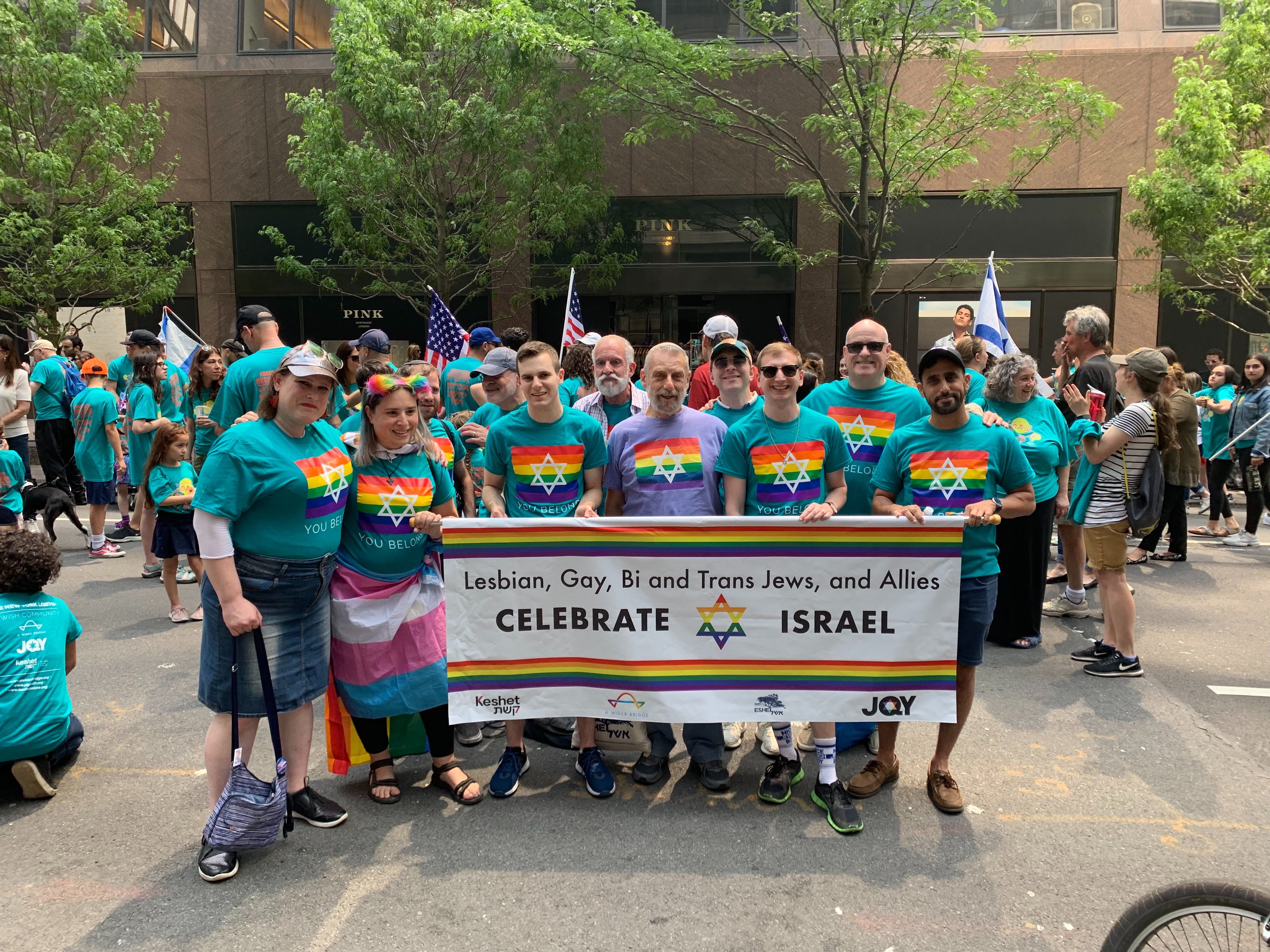 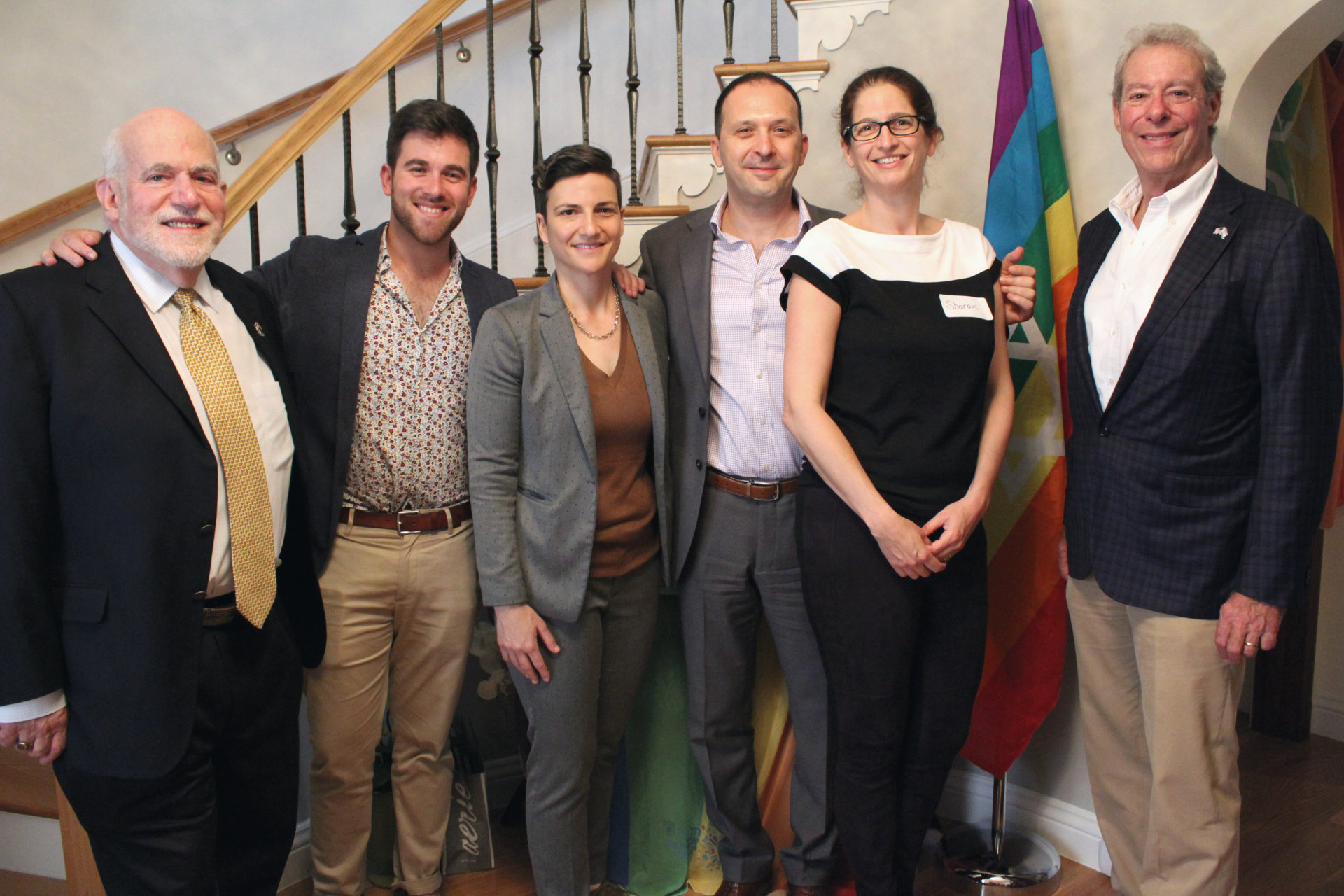 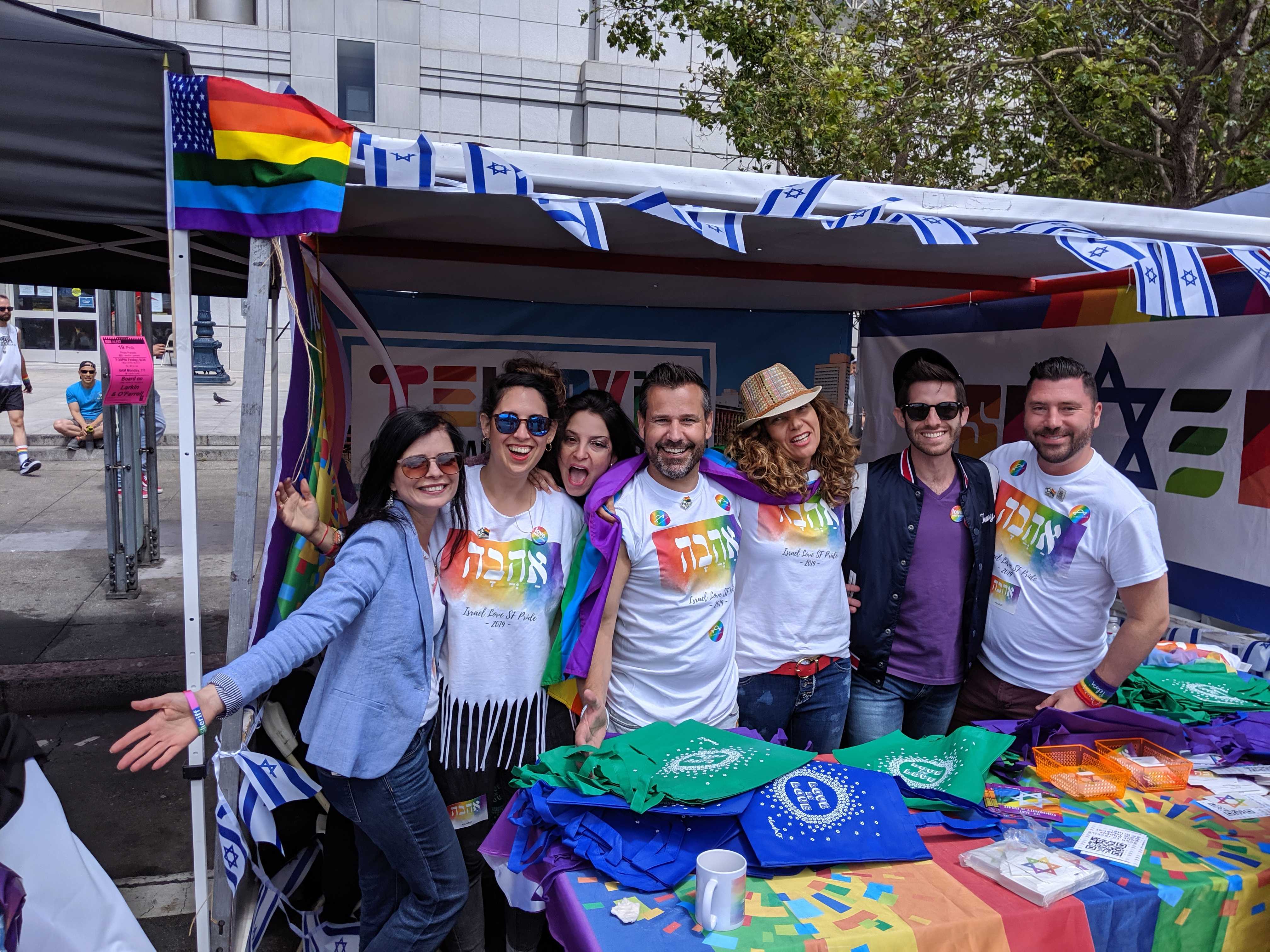 AWB’s Executive Director Tyler Gregory and Founder Arthur Slepian were honored to speak at Pride Shabbat services. Tye shared about the work of A Wider Bridge at Beth Am in Palo Alto, and Arthur spoke at Temple Emanu-El in San Francisco about building bridges between LGBTQ North America and Israel. 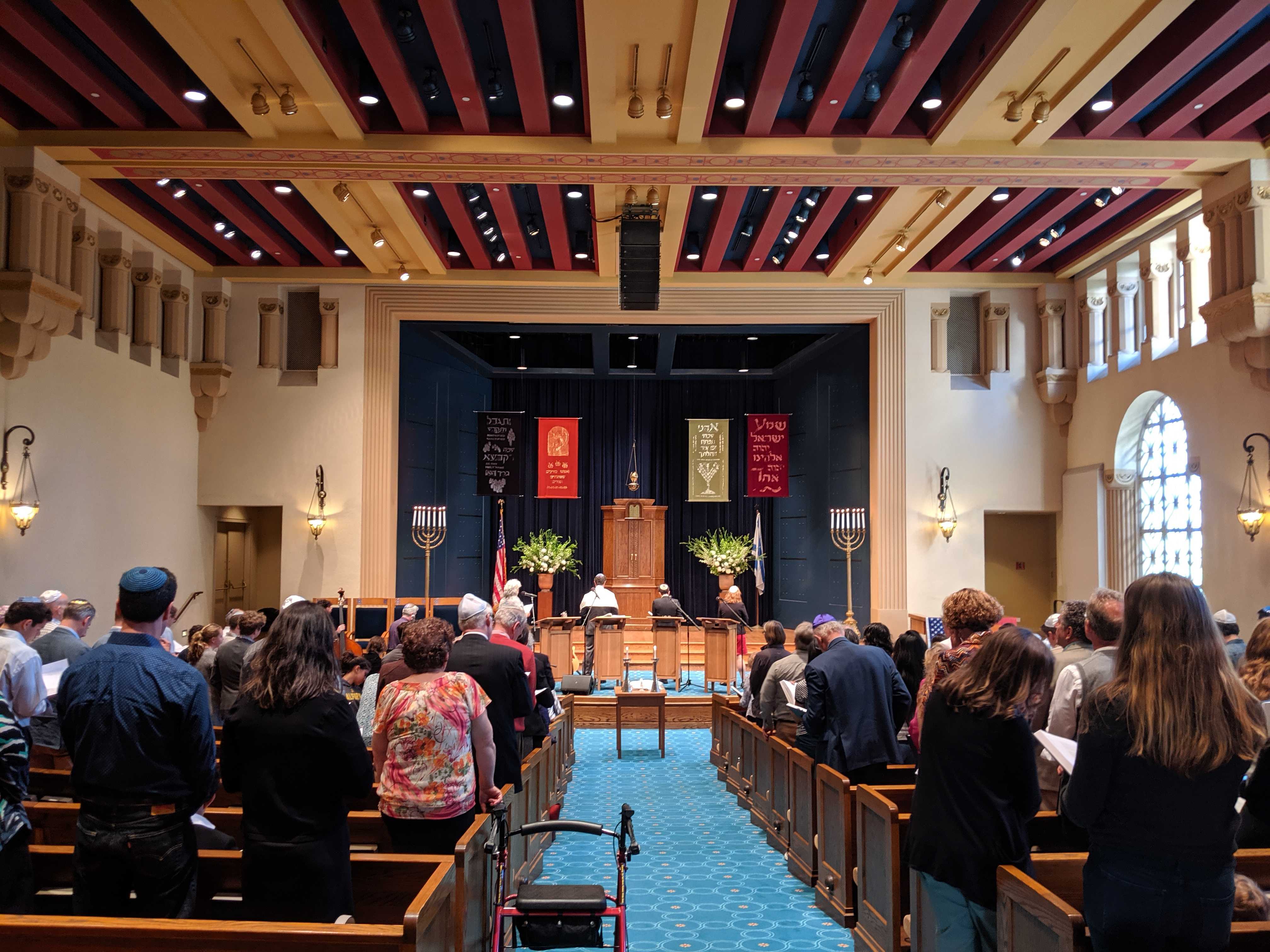 Over 40 pride events held across Israel

This year there were over 40 Pride events held across Israel – from Tel Aviv in the Center, to the tiny town of Zichron in the north, to the desert city of Be’er Sheva in the South.

A new survey conducted by the Hiddush Association found that 78% of Israelis support gay marriage or same-sex relationships, including 48% of religious Jews. The Jewish public has once again made it clear that it is liberal on matters of religion and state.  Read more

AWB stands with our Israeli partner the Aguda National LGBTQ Task Force in expressing deep concern regarding the recent Israeli Police drug raid on a Tel Aviv gay sauna which occurred during the start of Pride week. 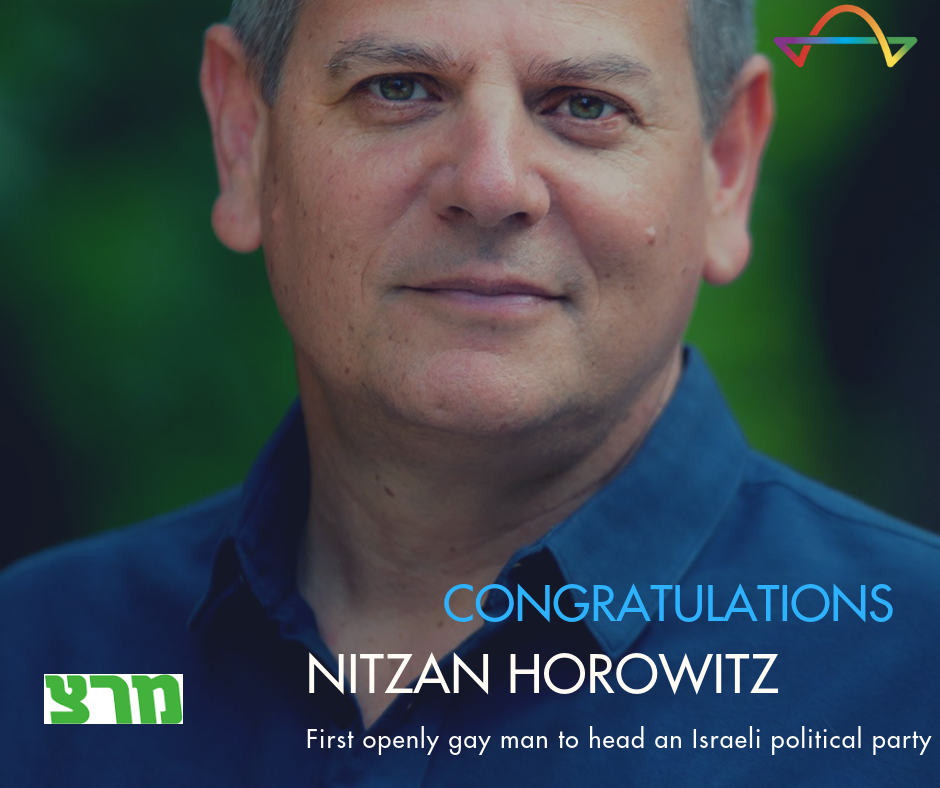