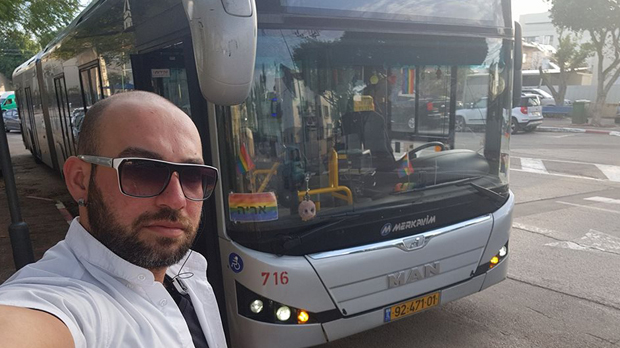 “When They Go Low, We Go Hai-fa Tour!” In March, A Wider Bridge will present a series of talks across the U. S. featuring Arnon Allouche and Adi Sadaka of the Haifa Communities’ House. Come learn how this organization is creating a welcoming multicultural, pluralistic, feminist space. A Wider Bridge

Learn more about the Haifa Communities’ House by watching this 1-minute video featuring Arnon Allouche and the upcoming tour. A Wider Bridge

Recently, Israeli Rabbi Yigal Levenstein proclaimed that “homosexuality should be eradicated like AIDS.” In response, Israeli LGBTQ activists wheatpasted beautiful images of LGBTQ Orthodox Israelis from the AWB Impact funded “Our Faces” campaign to let others know they are not alone. A Wider Bridge

Arye Keselman, Israel’s famous bus driver whose bus has already been nicknamed “the pride line,” was asked by his bus company to remove the rainbow flags from his bus following homophobic complaints.  MAKO

According to the Nir Katz Center’s latest report, hate crimes against the LGBTQ community in Israel are on the rise. More than a third of the reported incidents were directed against gay men. Walla

The 3rd annual LGBT rights day, organized by the Aguda, was held February 22nd. Read our recap. A Wider Bridge

Haifa is an Israeli city known for its activism, feminism, and plurality. This “Haifa Spirit” has trickled down to the LGBTQ community, and is now being celebrated through the 1st Annual Haifa Queer History Festival.  A Wider Bridge

Imri Kalmann (Former Co-Chair of The Aguda) filed a discrimination lawsuit against the Orthodox Rabbis’ organization and its leader, Rabbi Amichai Eliyahu, for discrimination on the basis of sexual orientation. WDG

Making History! Talleen Abu Hannah is chosen to compete in the Miss Israel Pageant, the first trans woman to ever be selected for this competition. ”
Ynet

Transgender Israeli activist Or Mizan writes about uncomfortable daily situations that trans folk face, and how cisgender people can be allies. WDG

One of AWB’s longterm Israeli LGBTQ partners is the Jerusalem Open House for Pride and Tolerance. We recently chatted with Irene Rabinowitz, JOH Director of Outreach and Development, about the recent leadership transition and her own story. A Wider Bridge

“To be us, it’s political.” Watch this new mini-documentary on Tel Aviv Drag Queens and their activism, created by Refinery29. Jesse Bernstein writes a review. Tablet

A post by gay dad Roy Youldous Rosenzweig went viral on Israeli Family Day (formerly known as Mother’s Day) that took place this month. In a moving post, Roy describes his longing for a family and the dreadful fear of not having one because he’s gay. A Wider Bridge