Melech Zilbershlag, a 21-year-old ultra-Orthodox (Hassidic) Jew, is one of Israel’s hottest internet celebrities. In an intimate interview with Israel Today before Yom Kippur he revealed surprising opinions about alcohol, light drugs, matchmaking, gays, advertising, money and fame – and explains why he is worth every shekel paid to him by the new Israeli public broadcasting corporation. 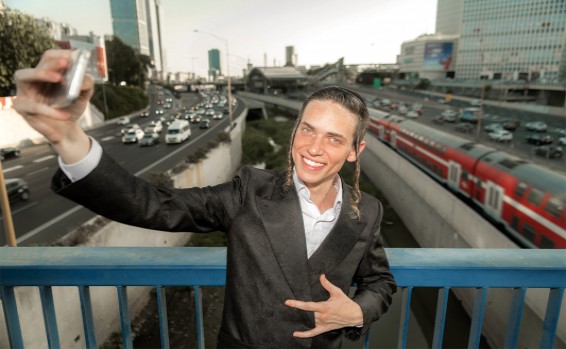 At his young age, Elimelech (Melech) Zilbershlag is entitled to be named the digital star of the new broadcasting corporation “Kan”, where he serves as reporter and host. He is also the ultra-Orthodox who elicits the most “likes” on the corporation’s Facebook page. In his latest video, for example, he described his obsession with Likes and how he would survive without his cellphone for the two days of Rosh Hashanah. Leading Israeli reporter Eran Swissa, who is publicly gay, sat down with Melech for a featured article published just before Yom Kippur, and asked him extensively about his views on the LGBTQ community.

“I have a lot of gay friends, and it never bothered me,” Zilbershlag said.”My father also has gay friends, some of whom are well known, and I don’t think it should ever bother us. Why is it supposed to be my business?”

What did you think of the story of MK Yigal Guetta of Shas, who was forced to resign because he attended the wedding of his gay nephew?

“When Guetta entered the Knesset I felt quite negative about him, even though I admit that I didn’t know him. But then I heard and read about things he did, from dozens of people he had helped personally, and I was sad to see him leaving.”

If you were to be invited to a gay wedding, would you go?

“Once I was invited and didn’t go, because it was on Friday afternoon, but I would also debate on whether to go to the wedding of a friend who does not observe Shabbat.”

In principle, do you oppose same-sex marriage?

“I am against the marriage monopoly of the rabbinate, but I also understand that in order to preserve the purity of the Jewish people, there needs to be a body that is truly responsible for that. When there is too much freedom, it’s not good for Judaism.
But on the other hand, we don’t need a body that controls us and holds our… forgive my saying.”

So if I marry my boyfriend, will it harm the purity of the Jewish people?

“No, but it will be an opening for other things that will go on ahead, like mixed marriages, etc. Defining the boundaries protects [the Jewish people].”

He is 1.84 meters tall, very skinny, full of grace and very meticulous in his appearance. He maintains his grooming routine religiously. “My payes (side curls) are a general Hasidic symbol, are one of the things that are very much identified with me. I don’t leave the house before I apply moisturizers to them, and on ordinary days I put on a regular moisturizer that feels good on my skin, and on days of a photoshoot I prefer a less pleasant cream – which gives the skin a richer appearance.”

Very uncharacteristic of an ultra-Orthodox man.

“My mother always says that I’m her ‘most beautiful daughter.'” I am aware that I sometimes dress up too much, and sometimes I find myself half an hour in front of the mirror, which is not very Hassidic, but I am very happy with it. During last Purim I recieved photos of children who dressed up as me.”

Would you describe yourself as the new Hassidic man?

“I’m an unusual ultra-Orthodox Jew; there are many like me, and they are accepted, and that’s amazing to me.”

It was impossible for journalist Eran Swissa not to refer to Melech’s “compelling and narcissistic” name, as Melech puts it. Melech, in Hebrew, means ‘King.'”My name leads to many reactions. The first question is always whether this is my real name, so yes, I am a descendant of Rabbi Zvi Elimelech Melizhensk and named after him.

“Before I was famous, I would say that my name is Nahum, because when the saleswoman declared ‘King, your coffee is ready,’ in a local coffee shop there were strange looks around me. I once worked on a pilot for a radio program and when we considered naming it, I immediately took out any use of the word Melech. Yes, I’m crazy about myself, but I must not exaggerate that.”