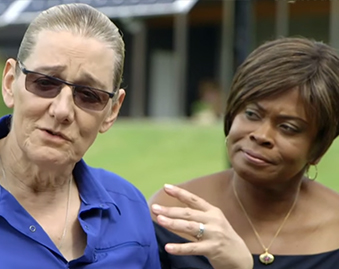 Martine, a transgender woman of Jewish heritage who was named one of the highest paid CEO’s, created a robot with artificial intelligence in her wife’s image.

Martine Rothblatt is the founder of Sirius XM and one of the highest paid CEOs. Whoopi visited her and wife, Bina and discovered what has driven this couple to the forefront of innovation. Martine tells Whoopi after being inspired to create Sirius XM and while enjoying its success she was living as two people. Martine was born as Martin Rothblatt and decided to transition to a female, becoming Martine during the height of her Sirius XM success. Martine’s wife Bina stuck with her as she fell in love with Martine’s soul. Martine is a maker and Bina is doer which helps this loving and game-changing couple work as well as one to do good.

Martine and Bina faced tough times when their daughter Jenesis was struck by illness, Pulmonary Hypertension, and given three years to live. They looked to each other to find a solution to save her. They found a medicine and used the money from Sirius XM to purchase it and save not only their daughter’s life but the lives of others as Jenesis continues to work to help those afflicted with the same disease get double lung transplants.

Read the full story on ABC The View