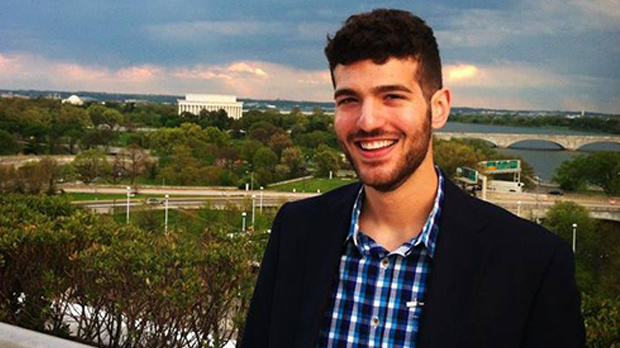 “There is no reason why LGBTQ people and their allies cannot be proudly Jewish and proudly Zionist. ” Journalist Mark Stern who writes for Slate, will be moderating the panel this Thursday for the LGBTQNZ Pride, Zionism, and Inclusivity in New York. Below, he talks about his reactions to the Dyke March fiasco and creeping anti-Semitism.

Jews who attended the Chicago Dyke March last June found themselves subjected to an unusual litmus test. Openly Jewish marchers were required to relinquish their “Zionist displays”—a category that included a Star of David on a rainbow flag—and repudiate all connections with the state of Israel. Jews who failed to pass this test were condemned and expelled. Dyke March organizers attempted to justify their actions by explaining in a statement that their “celebration of dyke, queer, and trans solidarity” could not tolerate “pinkwash[ing].”

Like many LGBTQ Jews, I was both disturbed and puzzled by the Dyke March fiasco. How could any movement claim “solidarity” with the queer community, my community, while rejecting Jews like me? How could an ostensibly inclusive event eject participants on the basis of suspected Zionism? And how could the Dyke March deploy the term “pinkwishing,” a noxiously anti-Semitic trope that dismisses Israel’s commitment to LGBTQ rights as a cynical publicity stunt? This Thursday, I’ll be moderating a panel hosted by the World Jewish Congress and A Wider Bridge to explore these issues—and ask how we can challenge the growing hostility toward Jews within certain pockets of the LGBTQ community.

The Dyke March was not the first time that Jews have been singled out and excluded from an ostensibly progressive LGBTQ space. Anti-Semitism also tarnished 2016’s Creating Change conference, an annual gathering sponsored by the National LGBTQ Task Force. Creating Change brings together LGBTQ groups across the country, and the January 2016 conference was scheduled to include a presentation by A Wider Bridge and the Jerusalem Open House for Pride and Tolerance, an LGBTQ community center. But the Task Force canceled this reception shortly before the conference began, bowing to pressure from groups like the Muslim Alliance for Sexual and Gender Diversity, which demanded that the conference’s organizers “reject Zionism” and “the forces of oppression and occupation.”

Following widespread outcry, the Task Force reinstated the event. But shortly after it began, a group of about 200 protesters marched through the conference and crashed the reception holding signs that read “Cancel Pinkwashing” and “Zionism Sucks.” Some participants allegedly used anti-Jewish slurs. The speakers from Jerusalem Open House were quickly escorted out, and the presentation was canceled.

Let’s be clear: This is anti-Semitism. Protesters selected the most overtly Jewish presentation at the conference and shut it down because of its Jewish character. Their actions provided a clear illustration of how “anti-Zionism” has become a euphemism for anti-Semitism. At the heart of this protest lay chilling malice toward Jewish people and the Jewish state. Protesters combined outwardly anti-Semitic epithets with anti-Israel chants to create an environment in which Jews could not possibly feel safe. And this at a conference that purports to support “full freedom and liberation for LGBTQ people and allies.” Do LGBTQ Jews simply not count?

Unfortunately, the Creating Change catastrophe was representative of a broader trend on the American left: The vilification of Israel—including progressive Israeli organizations and citizens—in the name of LGBTQ equality. It is a puzzling phenomenon. Israeli’s record on LGBTQ rights is not perfect, but it exceeds that of many Western nations, and all other Middle Eastern countries. The country’s dedication to LGBTQ equality should be recognized as a human rights victory. And yet, perversely, some activists cite Israel’s expansion of LGBTQ rights as a mark against the Jewish state. Why? Because, the theory goes, Israel is merely “pinkwashing,” passing and touting pro-LGBTQ laws to distract liberals from other policies to which they object.

To my mind, the version concept of pinkwashing draws on classic anti-Semitic tropes—conspiratorial Jews using insincere diversions to distract from their misdeeds. But leaving that aside, the practical effect of the pinkwashing fixation is to drive LGBTQ Jews out of LGBTQ spaces. According to this new dogma, support for Israel is mutually exclusive with support for human rights, including the equal dignity of gay and transgender people. Thus, all LGBTQ Jews must repudiate Israel in order to be authentically pro-LGBTQ.

That is dangerous, divisive nonsense. There is no reason why LGBTQ people and their allies cannot be proudly Jewish and proudly Zionist. These identities are not contradictory; they are complementary. Full equality for our community would require that many more countries adopt LGBTQ policies like Israel’s. Jews must not be compelled to renounce our principles in order to remain welcome in LGBTQ spaces. It is, after all, these principles that inspire us to fight for a more just and inclusive world.

We encourage you to continue this dialogue and attend Thursday’s event! Click here to RSVP.