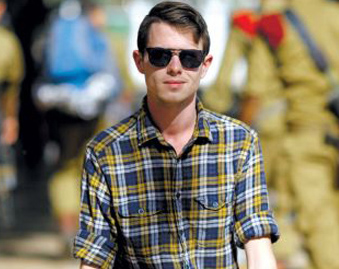 Gay and lesbian young immigrants from around the world are flocking to these shores to celebrate and explore both their Zionist and sexual identities.

“One of the first questions my mom asked when I said I was going to make aliyah was, ‘Is it because of the gay community?’” says Sam, 25, originally from Rochester, New York, who moved here almost two years ago. “My answer was no.”

The real reason for his move, he says, was a mix of Zionism and an interest in studying this country’s business culture, but he admits that Tel Aviv’s out and proud identity was a huge draw and one of the reasons he knew he would settle in that city rather than any other.

Tel Aviv has long been Israel’s gayest city. But in the last several years, it’s also become one of the world’s favorite gay cities, dubbed the “gay capital of the Middle East” by Out Magazine in 2010, and crowned best gay city in the world by a 2011 American Airlines survey.

Elle Jones, originally from Virginia, says she actually prefers Jerusalem but now lives in Tel Aviv for both professional reasons and because her girlfriend really likes it. Together, they have more of a community here.

“When I first moved to Jerusalem, it was hard for me,” explains the 27 year-old, who moved to Israel five years ago and says she didn’t come out until after her arrival. Jones adds that although she liked Jerusalem’s vibe, she didn’t feel connected to anything there, whereas in Tel Aviv, “I started to make friends; there are always new people to meet. I feel I have more roots in Tel Aviv.

2 thoughts on “Making an “LGBT-Aliyah””