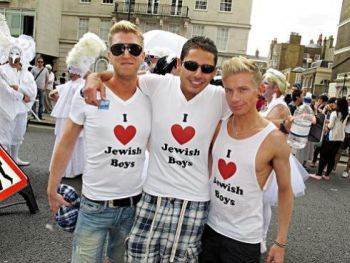 The Oregon Board of Rabbis, the Oregon Area Jewish Committee and the Jewish Federation of Greater Portland have endorsed the campaign to win marriage for gay and lesbian couples in Oregon.

As of Tuesday, Oregon United for Marriage has collected more than 127,346 petition signatures to put the Freedom to Marry and Religious Protection Initiative on Oregon’s November 2014 ballot. To qualify, 116,284 signatures are needed, but the campaign is continuing to collect to ensure it has more than enough valid signatures to qualify for the ballot. Every signature is an opportunity to have a conversation about why marriage matters.

Oregon is the only state where marriage for same-sex couples is slated to be on the ballot in 2014 and the first state to try to vote out a constitutional ammendment that excludes gay and lesbian couples from marriage.

The Oregon Board of Rabbis represents rabbis across the State of Oregon and Southern Washington. The Oregon Area Jewish Committee advances social justice, human rights, religious liberty, support for Israel, mutual understanding and democratic principles. The Jewish Federation of Greater Portland support supports a variety of community programs for people in need, from educational programs to elder care.