It was hard not to feel the emotional atmosphere at Reading 3 in Tel Aviv on Monday night. The event, “The Right to have Family,” was initiated by Liran and Yuval Altman-Kaduri, who a few months ago captured the hearts of the masses  with their YouTube video, “We would like to have a Child,” which expressed the simple desire to be parents.

Unfortunately, like all the other gays and lesbians in Israel, they are allowed to give, but not receive. They can serve in the army, pay taxes, contribute to society – but not be parents or get married. Even now, in 2013, the state prevents gays and lesbians from creating families, adopting children or using surrogacy services. Those who succeed in having kids through surrogacy abroad are exposed to illogical difficulties, bureaucracy and roadblocks from the state when they arrive back.

Many of the community leaders and members attended this very important evening, and also celebrities, artists and friends came and took part in the cry of gays and lesbians on their way to equality. It was enough to see the number of broadcasting teams and journalists from many different media, to understand how much interest Yuval and Liran’s struggle has created in recent months.

Besides great music, performed by Korin Allal, Keren Peles, Ninet Tayeb, Amir Fey-Guttman and the newlywed Ohad Hitman, important things were said by representatives of the community. Assi Azar read a letter that was sent to him from an Orthodox gay guy, who decided to get married to a woman and who is now 40 years old, has three kids, and is still living a lie. Tel Aviv Mayor Ron Huldai preferred to look on the bright side, emphasizing the change in recent years, particularly in Tel Aviv. Among other things, Huldai said that until a few years ago such an event could not have existed. “I’ll stay here for another five years, and together we will continue the change,” he said, referring to the upcoming elections for mayor and his gay opponent, Nitzan Horowitz (who was also present at the event).

Amir Frisher (Fay) Gutman moved the audience when he spoke of obstacles he had gone through together with his partner on their way to fatherhood. The two became parents to Roy three months ago, and like many others, have experienced difficulties and incomprehensible bureaucracy in the country.

And it does not matter if you are a single-sex couple and you don’t have a uterus. The official State of Israel is a few steps back from its social reality. There are already hundreds of children in Israel who were born to “other families” and were brought into the world in a variety of ways – these kids have parents in their daily reality. The state does not always get this reality easily and does not recognize these parents.

“The main casualties are these children. The state actually prevents their parents from being legal parents. Becoming a child to a parent is a basic right of the child. If the state does not recognize the child’s parent, it consumes the child’s rights.” 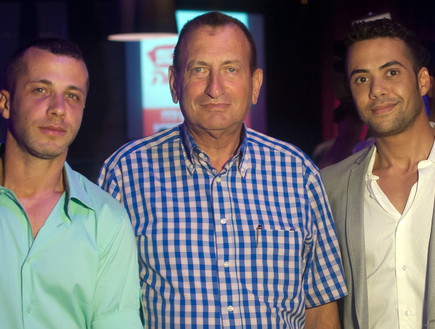 Organizer Yuval Altman Kaduri thanked the thousands who joined the struggle, shared, thanked, and contributed and noted that the fight is no longer just a struggle for him and his partner, but a battle of the entire community.

“The evening was successful beyond expectations. The crowd left with a sense of shock. Positive shock,  one that suddenly brings understanding as to what we can do as a community,” said Yuval Altman-Kaduri. “We were sad to see that a few members of the community who declared they care were strikingly absent, but the intense emotions during the evening, the things that were said by the artists and the important guests proved that we’re going in the right direction.

“The response has been overwhelming and fortunately the evening achieved its primary goal: a show of strength and awakening. We woke up to a morning after that feels different from other mornings, as big as that sounds. Last night when I put my head on the pillow the only thing that went through my mind was what to do next, how to awaken those who still insist on staying in their comfortable beds, and how to incorporate this community’s enormous power as it should be. Beyond our wars in the Knesset, this is one of the goals that we take upon ourselves at the moment. So good luck to us all. ”