The LGBTQ organizations in South Florida that met with the Ma’avarim delegation are already exploring the possibility of future ventures with Ma’avarim, the Israeli transgender organization. Ma’avarim finishes its U.S. talks tour tomorrow in Los Angeles. 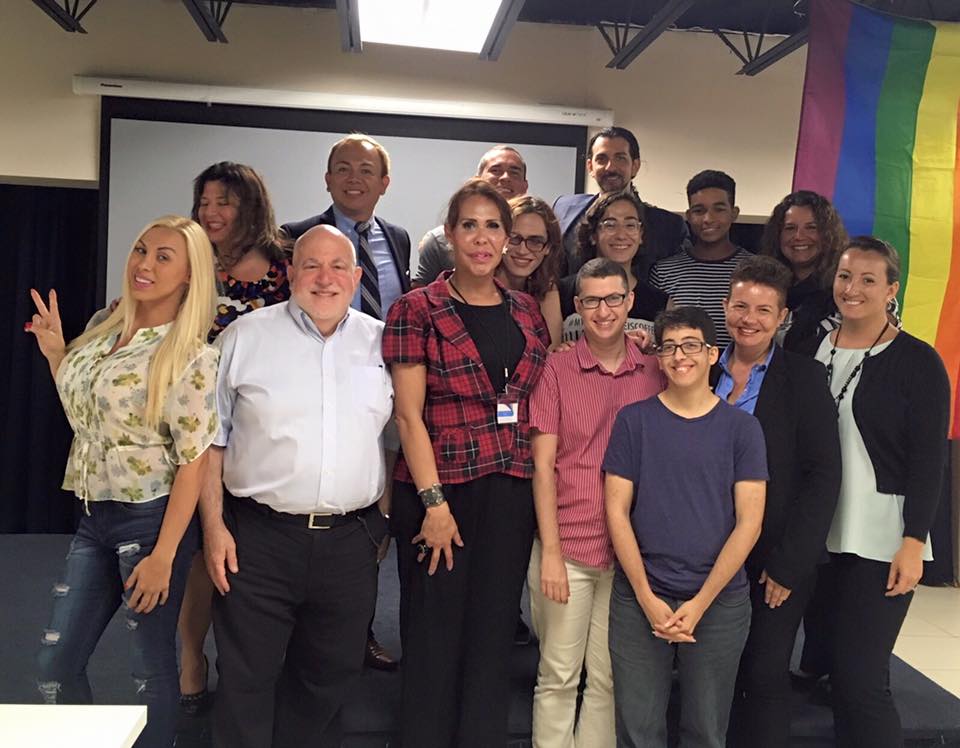 The transgender activists from Maavarim are finishing a successful U.S. talks tour with many opportunities for future collaboration between Israeli and American transgender communities. Some of the collaborations that have been discussed are Pridelines Youth Services “Beyond the Binary” program conducting video conferences with Israel where youth have a safe space to share their stories and find support; Unity Coalition/Coalicion Unida pursuing the participation of Israeli transgender people at their TransArt events; and Survivors Pathway coordinating a phone workshop to discuss the Israeli trans community’s legal and civic tools to confront abuse and violence. The LGBTQ community in South Florida look forward to future collaborations with Ma’avarim and wish them the best on the rest of their tour and journey beyond.

South Florida was the first stop in Ma’avarim tour to meet with LGBTQ leaders in the Transgender communities in U.S. cities. A Wider Bridge and the Ma’avarim delegation consisted of A Wider Bridge Executive Director Arthur Slepian; A Wider Bridge Deputy Director, Tyler Harris Gregory; Ma’avarim Executive Director, Elisha Alexander; trans youth leaders Amy Auerbach; Alan Walker; and Adi Ben Barak. The Israeli Consulate in Miami was instrumental in arranging meetings with the visiting delegation and some of the key LGBTQ organizations in South Florida who have specific programs targeted toward transgender and LGBTQ youth populations. The work of the Israeli Consulate in arranging these meetings was a foreshadowing of the theme for the Ma’avarim delegation’s visit as everyone came to learn how important and powerful collaborations are for creating change.

The visiting delegation started out its tour in South Florida by meeting with the LGBTQ Latinx centered organization, Unity Coalition/Coalicion Unida for a luncheon and discussion hosted by the Betsy Hotel in South Beach. Executive Director, Herb Sosa, some board members and volunteers of Unity Coalition/Coalicion Unida were on hand to discuss their work with Ma’avarim, which includes a yearly TransArt project, that sets out to portray authentic transgender lives through an arts forum.

The luncheon was also attended by openly gay State Representative, David Richardson D- Miami Beach, as a surprise guest which was arranged by Israeli Consulate of Miami. Ariel Roman Harris, Director of Media and Cultural Affairs for the Israeli Consulate of Miami, said “the Israeli Consulate of Miami supports initiatives that strengthen democratic values and the bonds between the LGBTQ community in the United States and Israel.” Representative Richardson explained the history of the LGBTQ community to the visiting delegation and talked about successes in the LGBTQ community such as the ban on conversion therapy in Miami Beach; and discussed tragedies such as the Pulse Nightclub Shooting in Orlando this year. Executive Director, Herb Sosa, discussed the impact of the Orlando Pulse Nightclub Shooting on the LGBTQ community in South Florida and said, “Life has changed for thousands of people. It’s not something that goes away. Israel deals with these kinds of attacks on a daily basis but we got a taste of it and it’s changed our events and the way that we think about security.” Executive Director, Elisha Alexander, stated “I was greatly impressed by the commitment I heard during the meeting to creating awareness, and building community ties.” After a thoughtful exchange of conversation and learning, the Ma’avarim delegation toured South Beach and took in a drag show at the legendary LGBT spot on Ocean Drive, The Palace.

The following day the visiting delegation were treated to a pizza party by the LGBTQ organization, Survivors Pathway, where they had a roundtable discussion with Executive Director, Francesco Duberli; OUT Miami Foundation Director, Jaime Bayo; legal assistance and social work providers and volunteers from the Trans Latina Project about the alarming cases of transgender homelessness, sex trafficking and violence committed against the transgender community. Their itinerary later included a visit to Pridelines Youth Services where they met with Executive Director, Victor Diaz Herman, and took in a tour of the new Pridelines Community Center in Miami. After a day of meeting with both LGBTQ organizations, Executive Director, Elisha Alexander, commented, “After meeting with our new friends here in South Florida, the importance of promoting the trans community is clear and we can help each other. Second, that big change needs big funding, and the organizations here are creating great change. And basically the problems are the same.”

The tour itinerary concluded with a special evening reception in Ft. Lauderdale at the home of Aaron Taber and Cantor Mark Goldman of Temple Kol Ami Emanu-El in Plantation where the Ma’avarim delegation spoke to reception guests about their experiences in Israel and what they learned by meeting with LGBTQ leaders in South Florida.
When asked about his overall impression of the LGBTQ City Tour stop in South Florida, Elisha Alexander reflected, “The tours of the organizations were inspiring. Many of the issues are the same, we all face discrimination, violence, lack of services, stereotypes, and not enough awareness to our problems, in all aspects, education, housing, employment, healthcare, and more. The Hebrew Language, like Spanish, is highly gendered, which makes it difficult especially for non-binary people. All around the world there is a high suicide rate, many face homelessness and some are marginalized into sex work. But there are some differences – because Israel is much smaller than the US, it is sometimes easier to change policy on the national level. While US lobbying requires heavy funding and resources, we find that we are able to send our young trans leaders to the parliament and make change. Its slow, but it is happening. There is so much work to be done, from suicide prevention, to education and change, accessible healthcare, sometimes it’s hard to decide where to start, and you feel that you have to literally pull community members, one by one, out of hell, away from violence, loneliness, shame, trauma. But on the other hand working with the trans community is so inspiring and amazing that it is worth all the difficult times. It’s our next big revolution.”

In any revolution or movement to create change it takes a collective effort. Programs like the one that A Wider Bridge commissioned to bring transgender youth leaders from Israel to various cities in the United States to engage in dialogue on what issues on a global scale effects the LGBTQ community, particularly the transgender community, is the cement needed to build a sanctuary where the LGBTQ community can live freely with human rights. It is the connections to other organizations and individuals who commit to working toward these goals collectively where change can ultimately be created.

If you would like to support the work of Ma’avarim or A Wider Bridge, you can visit the Ma’avarim website