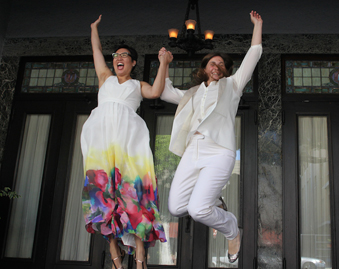 The Jewish Journal invited rabbis from throughout Los Angeles to contribute their thoughts and reactions to the Supreme Court decisions on gay marriage.

Today the chupah is up and reservations are once again being accepted!

I remember like it was yesterday — how blessed I felt and how busy I was — during the short window of time ( 4½ months) in 2008  when same gender marriage was legal in California.  And I well remember too how it all came to an abrupt and teary halt in November 2008 when Prop. 8 passed in California.

Of course not all has been resolved with today’s interesting U.S. Supreme Court decisions.  Much remains to be done (including work to overcome some of the Court’s other decisions earlier this week).  But we can stop for a moment anyway from the ongoing struggle — stop to say a shehekhiyanu and celebrate this step forward.

In this week’s Torah portion, Pinchas, 5 sisters — Mahlah, Noah, Hoglah, Milcah, and Tirzah — boldly step forward to plead their case for justice, and in so doing help change their society (Numbers 27:1-11).   How many plaintiffs, how many attorneys, how many brave souls through the generations followed in their footsteps, stepping up to make a case for justice?  We are their descendants and beneficiaries — and today we as a nation grow stronger because of them.  Mazel tov to us all!  Let the weddings begin!

Today is a true historic day! A moment when you can feel the chains of bondage breaking. The Supreme Court has ruled that DOMA, the Defense of Marriage Act is dead.  The Gay and Lesbian married couples cannot be denied federal rights and benefits. And Proposition 8, the hateful ballot proposition in California that went into affect in November 2008 taking away the right to marry is also history.  The court ruled that the people who sponsored Prop 8,who took the case to court when the State of California Governor and Attorney General refused to sponsor the court case, had no standing to do so.  Thus Prop 8 is dead.

While the Supreme Court avoided ruling on a sweeping marriage equality platform across the United States, the ruling means that now in 13 states (including CA) and the District of Columbia where marriage is legal, the Feds must recognize that marriage in the over 1138 rights and benefits and privileges at the Federal level.

These include according to the Williams Institute at UCLA, the opportunity to sponsor a foreign born spouse for permanent resident status the same as heterosexual couples.  There are over 24,700 bi-national same-sex couples who can finally get out of limbo.

The marriage equality fight isn’t over in the United States. There are many places where gay men and lesbians cannot legally wed.  And there are 33 states in the US where you can still be fired for being gay!  That is why it is time for the Employment Non-Discrimination Act to pass the House and Senate.  The marriage equality and adoption rights must still be fought state by state.

We aren’t full citizens yet. But today for sure… a little more.  My congregants are celebrating tonight even as we understand that full equality is not yet here for everyone.  The gutting of the Voting Rights Act still puts our country at great risk. We must live up to the promise of liberty and justice for all.  Even as we celebrate today, the state of Texas is moving to make it more difficult for people of color to vote and only yesterday tried to take away women’s reproductive freedom. Until all are free-no one is free.

But for today I will rejoice a little even as there is still work to be done.

I am grateful to God for this day.  A day of blessing for sure. A day where we feel God’s justice showering down upon us and encouraging each of to continue the work of Tikkun Olam-repairing a broken world.

On this side of history
by Rabbi Heather Miller 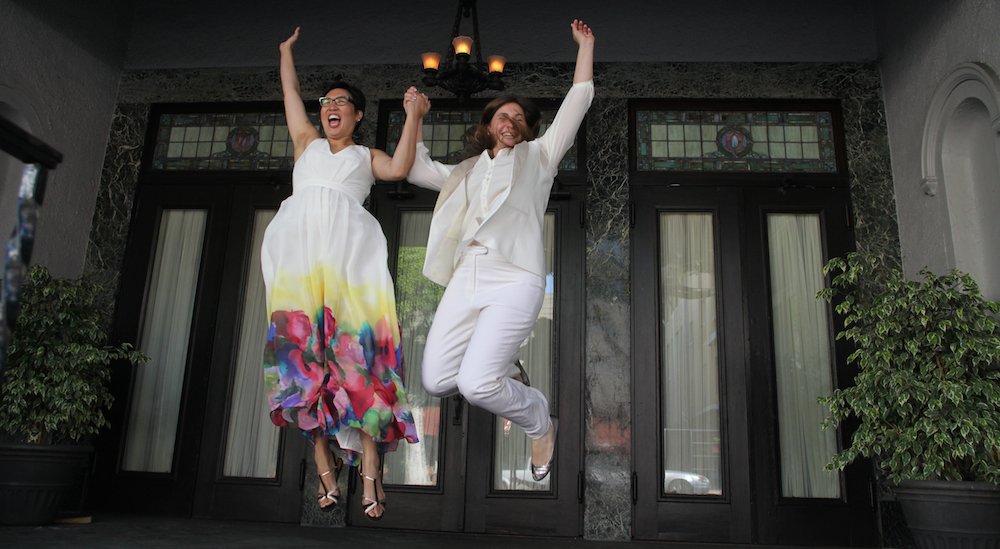 Before today, I couldn’t tell you, because I had nothing to compare it to.

But today, on this side of history, I can say
that it feels like sunshine breaking through the clouds.
That the Creator is shining down
renewing the covenantal promise
that we are indeed created in the Divine image.
It feels like a heavy rush hour traffic suddenly clearing
and all road blocks have been taken away.
It feels like we are 10,000 feet up and now free to move about the cabin.
It feels like news that a disease has gone into remission.

One of life’s major obstacles have been removed
and instead of our government working against our family unit,
it is supporting it, rooting for us.

It feels like we are marching through the parted waters of the Red Sea,
on our way to freedom.

It feels like people have confidence in our ability to make the world a beautiful place,
instead of begrudgingly tolerating us.

It feels like we are a true part of the community and that we are blessed.

Rabbi Heather Miller serves several congregational communities in Los Angeles, CA. Prior to ordination from Hebrew Union College-Jewish Institute of Religion in 2008, she majored in Peace and Justice Studies and Africana Studies at Wellesley College in Wellesley, MA. She and her wife, Melissa de la Rama, were named the 2013 Liberty Hill Foundation “Leaders to Watch.” Learn more at www.rabbiheathermiller.com.