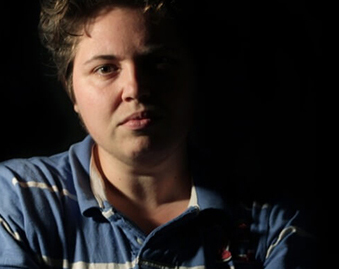 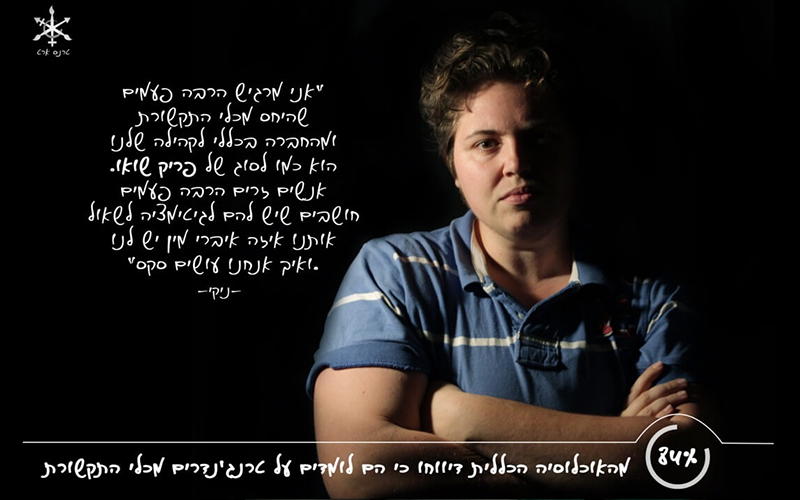 “Many times I feel that the attitude of the media and society towards us is like we’re a freak show. People who I don’t know think they have legitimacy to ask us what sex organs do we have and how do we have sex” – Niki Sever Fact: 84% of general population report that they learn about transgender people from the media

“The idea for the campaign belonged to a young trans man I knew,” Niki told Israeli LGBT magazine WDG. “He’s also the talented photographer who took the pictures, along with May Peretz who edited them.”

Niki and the directorial team of the campaign gave an opportunity to everyone in the transgender community who wanted to take part to offer their challenges and dreams with photos through the campaign. They’ve conducted two days of photoshoots- one in Tel Aviv and one in Jerusalem, and after they had all the material they decided to focus the campaign specifically on the difficulties of the community.

“It was important to raise awareness for issues following the suicide of May Peleg, who I knew personally,” Niki says. “That was the first time someone I knew personally committed suicide. Despite the media coverage of May’s personal story following her death, there’s still a lack of exposure to the difficulties of our community’s daily life. There’s no public awareness of so many important issues, problems, difficulties, and just everyday issues. Hence the idea to give the transgender community a face, , and not individual faces as it happens often in an article or two that are published in the media, but to show the diverse face of people from the variety of the transgender community. ” 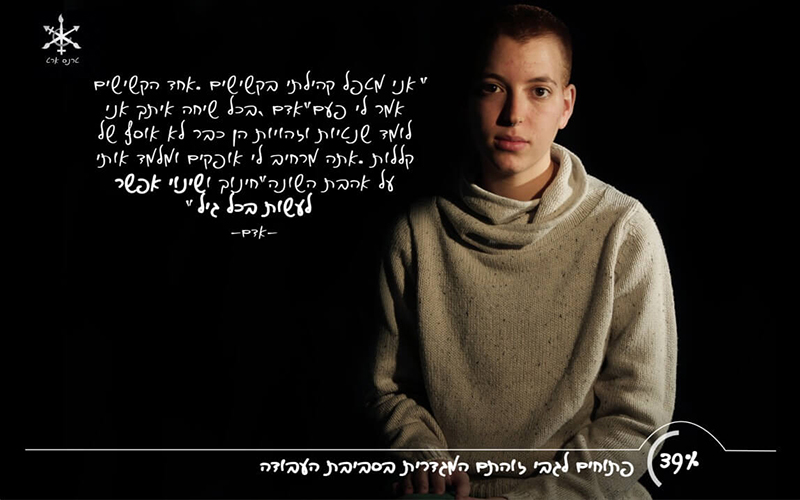 “I take care of the elderly, and one of them once said to me ‘Adam, in every conversation I have with you I learn that orientations and identities are no longer a bunch of curses. You expand my views and teach me on loving the other,’ so education and change can be done at any age” – Adam
Fact: 39% of transgender community are open about their gender identity in their work environment 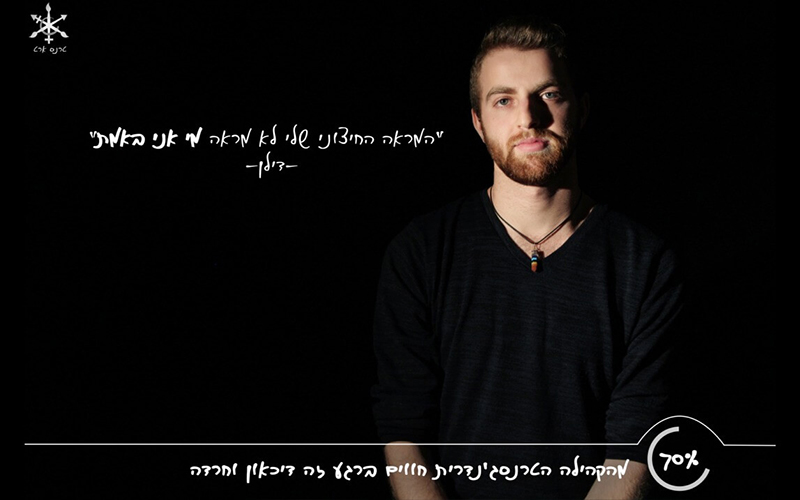 “My appearance doesn’t indicates who I really am” – Dylan
Fact: 70% of the transgender community experience depression and anxiety at this very moment. 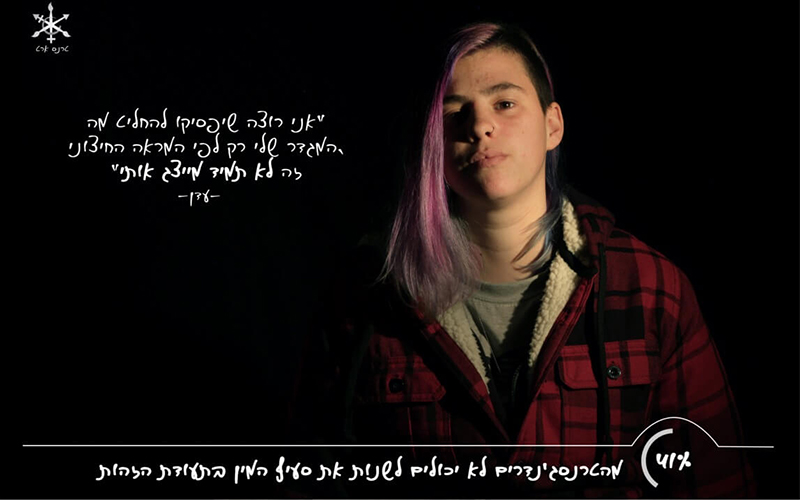 “I would like that people will stop deciding what my gender is according to my appearance, it doesn’t represents me all the time” – Eden
Fact: 41% of the transgender community in Israel can’t change their gender status on their ID. 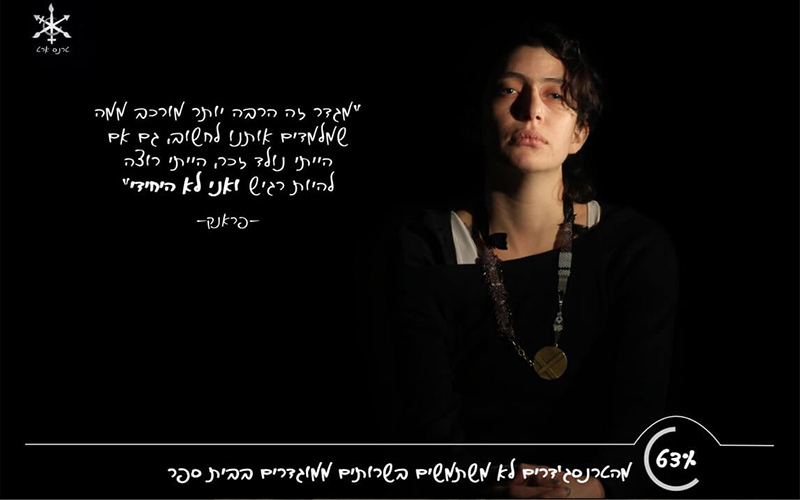 “Gender is much more complicated than what we are taught to think, even if I was born male, I would have wanted to be sensitive and I’m not the only one who feels that” – Frank
Fact: 63% of the transgender students don’t use gender-defined toilets at schools 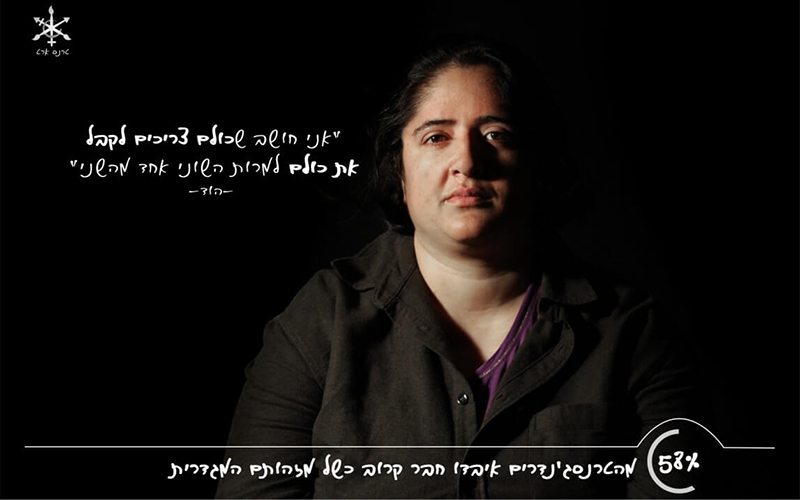 “I think that everyone should accept everyone, despite the difference between one to another” – Hod
Fact: 58% of the transgender people lost a close friend because of their gender identity 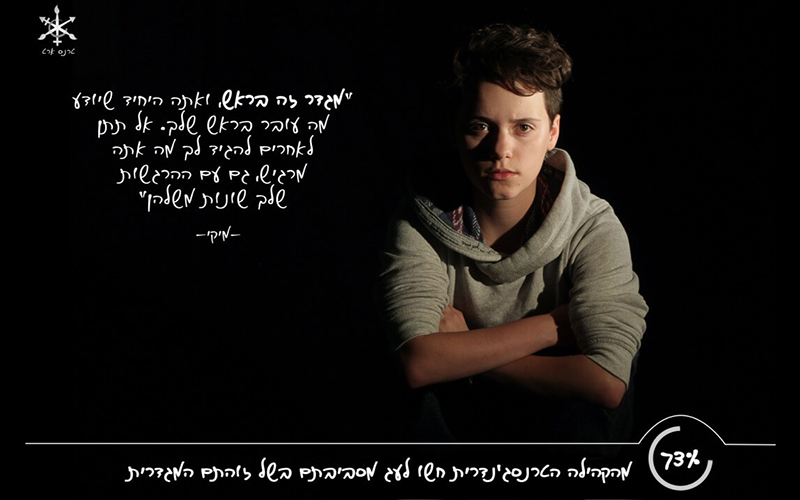 “Gender is in the mind, and you are the only one who knows what’s going on in your mind. Don’t let others tell you what you are feeling, even if your feelings are different than theirs.” – Micky
Fact: 73% of the transgender community felt that they are being ridiculed because of their gender identity 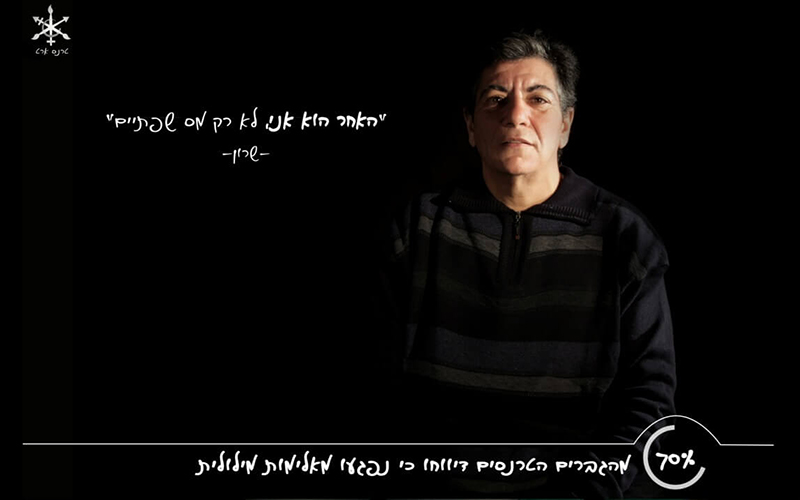 “The other is me, not just lip service” – Sharon
Fact: 70% of transgender men reported they suffered verbal abuse. 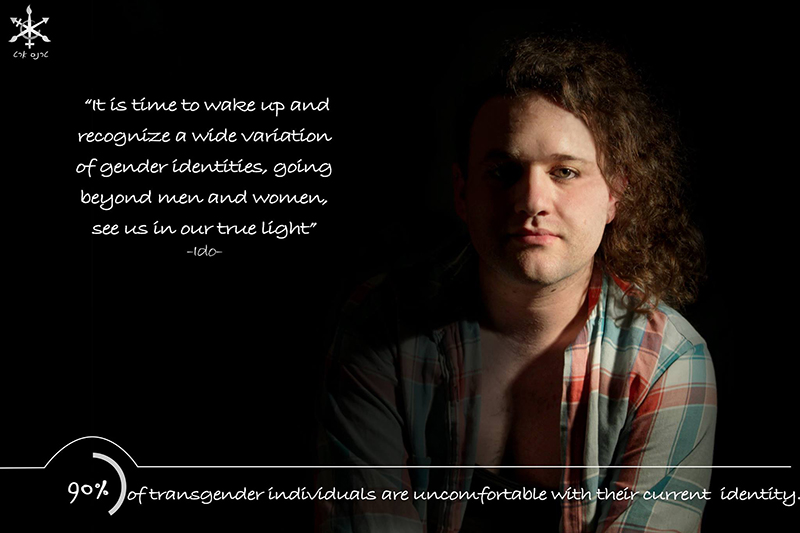 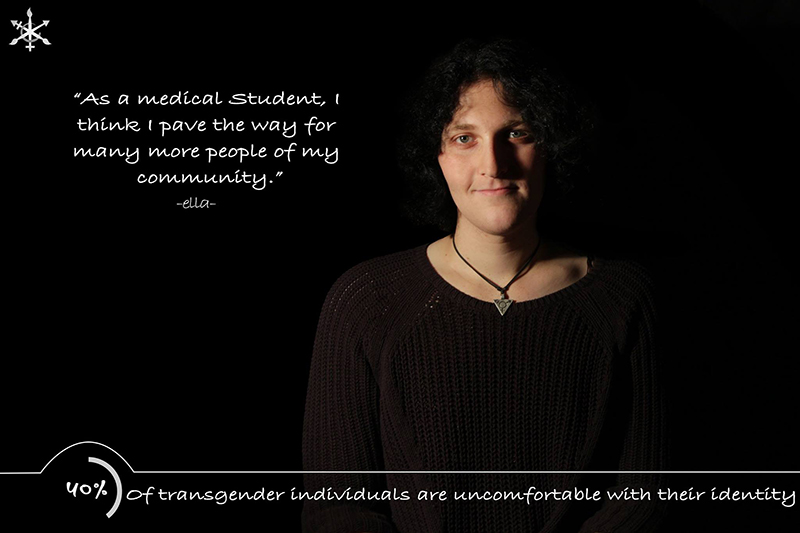 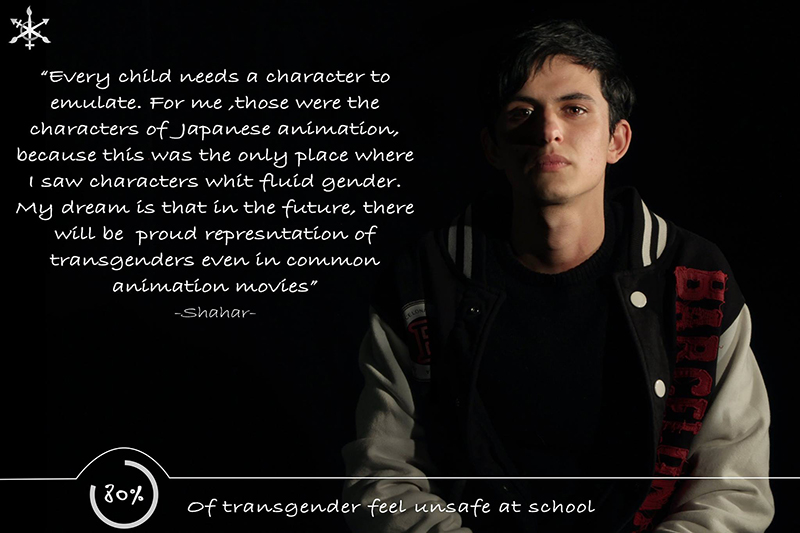 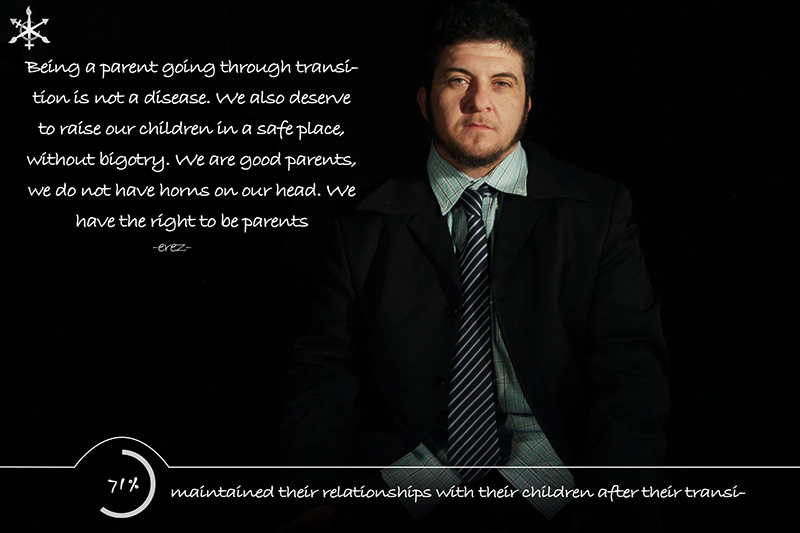 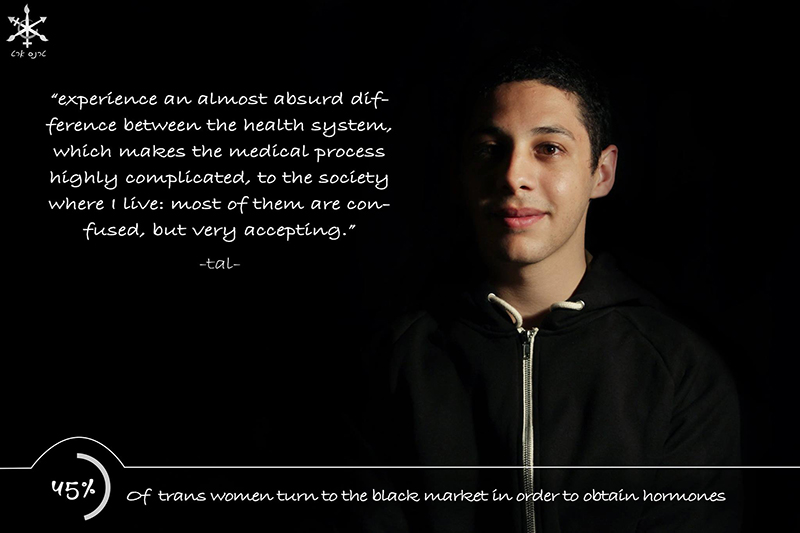 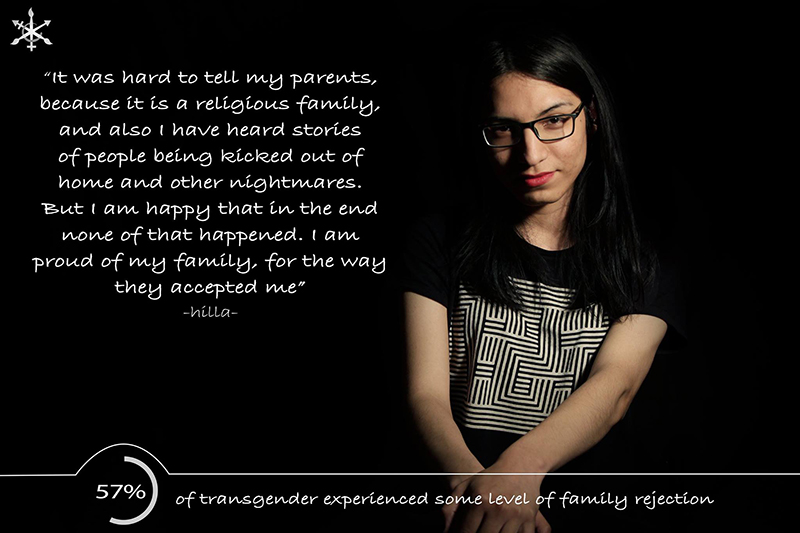