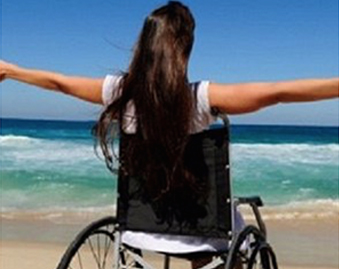 Coming out is never easy, let alone when you are on a wheelchair; Yarden, a lesbian teen, and Moran, a gay man, talk about LGBT life of people with disabilities, and coming out of two closets: first as a sexual person, then as LGBT.

Yarden Martziano, 18, from Rishon LeZion, was injured in a car accident and is now confined to a wheelchair. “A lot of people see the difficulty, the wheelchair, and find it difficult to understand at first glance that I am a normal girl”, she says.”Adults and children alike look at me differently or speak about my disability near me, as if I can’t hear them.”

Like Yarden, Moran Gil, 26, coordinator of the National Service at IGY (Israel Gay Youth), is living with disability, paralysis of his feet which causes him lameness. “As a way of life, I think that if an individual doesn’t perceive his disability as affecting his personality, others do. Although I am a disabled person, I don’t feel the disability in my interaction with society,” he says.

Like sexual orientation and gender, physical limitations are sometimes accompanied by feeling different – which leads to hiding. “Despite the fact that my good friends have always surrounded me, I’ve felt in many cases the difficulty of fitting in socially due to the difference”,Martziano says. “In addition to my physical differences, in high school I also discovered my sexual identity.”

At first, Yarden didn’t rush to tell her friends, but after years of hiding and wavering, she joined IGY, and in addition to LGBT friends she met there, she began to share her sexual identity with close friends of hers. “The meetings themselves were mostly accessible, the instructors always tried to ensure accessibility for disabled people,even in places that weren’t prepared for that in advance,” she says. “Unfortunately, at a small portion of the events it was not possible to allow access, which prevented me from attending.”

The LGBT community is known for being open and tolerant towards the different; however, there are still places that are not accessible to people with disabilities. “If the perception is that bars and clubs are meeting places where community unites, I’d love to see more access to allow everyone to spend time there and get to know people,” Moran says. “Nowadays, for example, there are still steps at entrances to clubs, which prevents access for all.” Even socially, attitudes toward people with disabilities is not characteristic of an entire community and varies from one place to another. Yarden says it’s easier for her to integrate in LGBT social settings, but it’s another story when it comes to intimate relationships. “I feel that for people like me it’s more difficult to find love and form relationships. I feel that every time I have to prove myself all over again and show that I am a normal girl.”

“Coming out of the closet was difficult for me, because nobody thought about me in the context of sexuality,” she adds. “I felt that people around me were not aware of the fact that people with disabilities have a need for intimacy too. It’s obvious that regular people have a need for relationships, for experience, but in my case it was not perceived as obvious. I experienced two coming outs, one as a person who can be attracted to people and fall in love, and the other as a lesbian.”

Coming out expresses the exposure of the inner truth in various fields of life, and therefore each one sees the definition in a different way. “You could say that there’s a closet for a lot of stuff, like moving from being orthodox religious to secular, for example”. Moran says. “In my opinion, acceptance of a disabled person is similar in perception to acceptance of a homosexual person, since they both relate to the difficulty to operate as a minority in society and both affect decisions in life.”

“What is important for me to clarify is that I accept my disability and I have no problem with it; my problem is in the way in which the society perceives it,” Yarden says. “As in expressions of homophobia, there is also a stereotypical perception towards disabled people, preventing opportunities and possibilities for developing relationships. Physical disabilities of any kind aren’t ‘paralyzing,’ just as love and relationships can be conducted in different ways. It’s just that the daily routines run in a different way.”