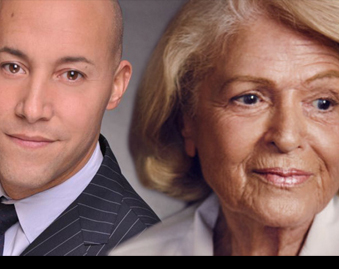 Alan van Capelle and Edie Windsor were honored by the Jewish Daily Forward as two of the “Forward 50,” – the newspaper’s annual much-watched list of notable and newsworthy American Jews

As the CEO of Bend the Arc: A Jewish Partnership for Justice, a national Jewish social justice organization, Alan mobilizes Jewish voters around the most pressing domestic policy issues facing the nation—immigration, marriage equality, and expanded rights for working people, to name a few.

Guided by Jewish values and with a strong track record of victories for LGBT and workers’ rights, Alan adds a strong moral voice to America’s progressive movement. This year, Alan represented the Jewish community at the 50th anniversary commemoration of the March on Washington, where he addressed the crowd from the steps of the Lincoln Memorial leading with the words, “I speak to you as an American Jew.”

Edie Windsor made the Top 5 for her role in the fight for marriage equality: on June 26, she won her suit at the Supreme Court, a decision that struck down the federal Defense of Marriage Act.

While the most visible victory for gay rights this year, it was far from the only one, a fact reflected in this year’s list. Six of the honorees are gay, reflecting a more general acceptance of gays in the wider Jewish community, as well as the prominence of Jews in the struggle for equality.

“As a former F50 honoree myself, I think it’s a combination of two factors,” Jay Michaelson, author of “God vs. Gay: The Religious Case for Equality,” wrote in an email to the Forward. “The struggle for equality is among the great civil rights issues of our time, and so it’s natural that those involved with it are recognized in this way.”

Read more on The Forward

Other LGBT honorees  is Idit Klein, Executive Director of Keshet, and writer and performer Harvey Fierstein,  Take a look at the full list here