Here’s how ‘Celebrate Israel’, the world’s largest celebration of Israel’s 65th anniversary, looked from the point of view of A Wider Bridge’s supporters, who marched Sunday as a part of the LGBT Jewish group.

Tucked in the back, adorned in bright yellow, and supported by blasting music of one Ms. Dana International, the Lesbian, Gay, Bi Trans and Allies Cluster Group marched proudly, and loudly! With close to 100 participants, supporters of A Wider Bridge, JQY, Eshel, Keshet and CBST, the LGBT cluster was very well received! With the support of our friends on the sidelines, the LGBT group received an outpouring of support, cheers, including many Orthodox Jews dancing to our music and raising their hands in dance and excitement!

Of course any gathering of Jews comes with controversy and opponents.  With only a few Hasidim showing their upset with the LGBT group, those holding signs against homosexuality, were washed away amongst those expressing unhappiness with the State of Israel. With only a half dozen people outside the Plaza Hotel, and with the NYPD doubling them in numbers, the gays marched loud and proud, and as it rained ever so briefly, it was clear that this was not G-d’s ‘raining on our parade’ but rather his shedding tears of nachus! 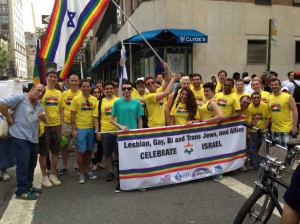 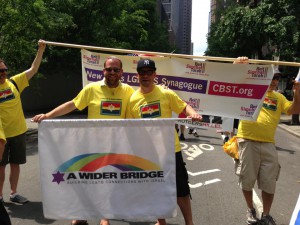 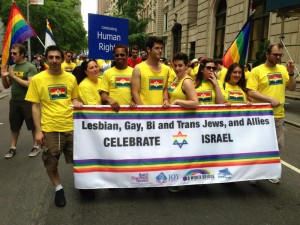 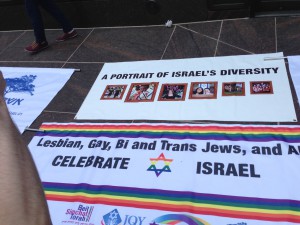