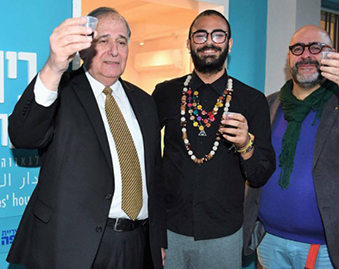 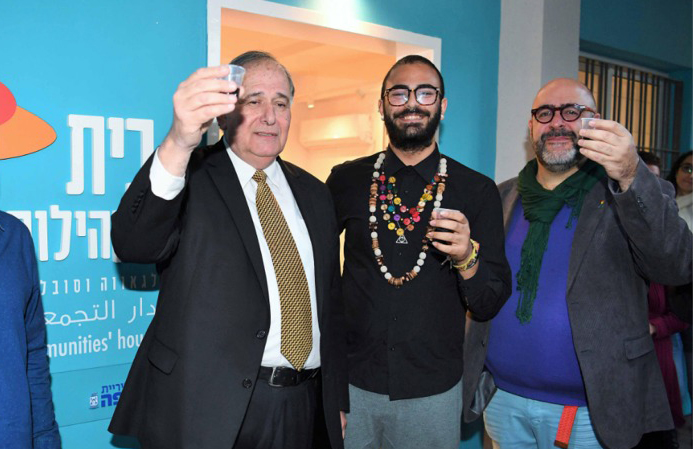 The center, located in the Hadar neighborhood, a pluralistic and liberal neighborhood in the city, was recently renovated to fit the needs of the community at a total cost of approximately NIS 2 million , which also included the reconstruction of “Garden Castle” next to it.

The center’s space features a “living room” to be used as a social space for the members of the community, three halls for events, a clinic in cooperation with the Israel AIDS Task Force, offices of various LGBT organizations and a coffee shop that will open soon.

In addition to activities of the various LGBT organizations, the LGBT center will also offer workshops, screenings, lectures, exhibitions and Shabbat services. Also, the center developed two courses to be held there in collaboration with the University of Haifa: LGBT Jewish Leadership and LGBTQ Arab Activism.

The center’s Executive Director is Arnon Allouche, a native of Haifa, with experience of more than 10 years working with marginalized populations in Israeli society. The Communities’ House will promote a large-scale urban action in cooperation with various community officials and City Hall.

“Not for nothing that we have chosen to call it the Communities’ House for Pride and Tolerance”, said Mayor Yona Yahav in the opening ceremony. “From here, the call will be issued to all residents of Israel to look each other in the eyes, and see the human and the beautiful hidden within each of us. The Communities symbolizes the spirit of tolerance, guarantees interoperability and acceptance of the other that characterize our city so much. Together we will continue to develop the center, so it will become a warm and protected home for members of the gay community and will be coordinated with the multi-year work plan for all the different communities and ages.”

The push from the Haifa Municipality to launch the center was given by Yossi Shalom, a member of the Council of the Municipality of Haifa who’s in charge of LGBT issues. He underwent a personal change last year and decided to join the LGBT activists in the city and work from within to promote the community in the city.

“In August last year there was a rally in Haifa after the murder of Shira Banki at the Jerusalem Pride Parade”, Shalom told WDG. “Hundreds of people arrived at the event and the discourse that evolved there also pointed toward a city hall that doesn’t work for the community. I was in the closet back then and I realized that if I, as a councilor in the closet, didn’t take a big step and change this reality, I would not forgive myself. Two days later I came out to family and friends, which turned out very well, and a week later I sat in the office of Mayor Yona Yahav. The conversation was supposed to last a few minutes but lasted over an hour. I told him everything about the vision of what I want to do with the community in the city and on the same day I received from him the mandate to lead the community In city hall.”

Yossi Shalom is the first council member from the community in Haifa. He is also in charge of the issues related to it, besides coordinating the youth issues. “From that day I began an intensive study with members of the community in Haifa, and with the organizations. We were looking for a place for the center. We began the process of designing and planning, and today, nine and a half months later, we officially open the Communities’ House. ”

What are your plans for the center?
“It was very important to have a community home for the northern LGBT community, to coordinate all the activities, the events and the collaborations and to give a prompt response to the community needs. Apart from launching the center, we have created a dialogue in the education system in Haifa, in schools, in non-formal education, training for counselors, teachers and educational psychology. We opened five IGY (Israel Gay Youth) groups, and currently we are building a service level agreement with the Haifa municipality division heads for the community. A few months ago we made sharing with the gay community in Haifa a public affair, and together we have built a work plan for the coming year, which includes dozens of events, conferences, group gatherings and many more.