Inspired by the connection he had made with LGBTQ activists from Israel, Joe Goldman, public affairs and civic engagement manager for San Francisco at the Jewish Community Relations Council and A Wider Bridge LGBTQ Leadership Mission alum, says we all have to do whatever we can to assure security for the LGBT people currently being persecuted in Chechnya. 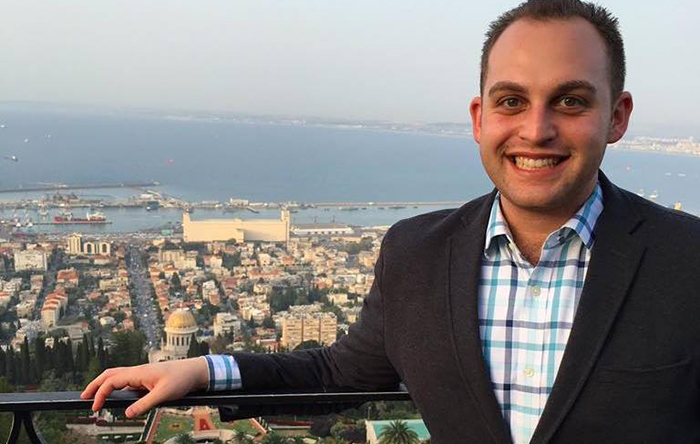 I participated last week in a vigil of solidarity with the millions around the world expressing horror and dismay that concentration camp-type facilities are being constructed in Chechnya to imprison and torture gay men. Chechen leader Ramzan Kadyrov has called for the elimination of the entire gay community by the start of Ramadan, initiating an anti-gay extermination not seen since the Holocaust. To stand against such atrocity, I was proud to join the group of elected officials and community leaders outside the Russian Consulate in San Francisco.

Just over 30 years ago my predecessors at the Jewish Community Relations Council stood before this very same building on Green Street, located in an incongruously lovely part of San Francisco’s Pacific Heights, to demand the release of Soviet Jewry from oppression and persecution. The fight took place during the generation after the Holocaust. Baby boomers, especially Jews, who were still struggling with their parents’ inability to prevent the Nazi genocide, pushed hard to secure freedom for Soviet Jews trapped behind the Iron Curtain. There were mass demonstrations and interfaith Passover Seders organized in protest, as well as an alternative cultural event hosted outside of the Bolshoi Ballet performance in San Francisco. It was a battle that was ultimately won. Millions of Soviet Jews were eventually allowed to emigrate and San Francisco is now home to the fourth largest former Soviet Jewish community in the United States.

This is the kind of work that gives JCRC its raison d’etre. We believe the Jewish community has a special interest in defending democratic institutions that provide security for all and work to repair the world (tikkun olam ) through social justice. As the advocate for over 60 Bay Area Jewish organizations, we were active in the decades-long fight for freedom of Soviet Jewry and also spoke out when Putin’s regime ratcheted up its attacks against Russia’s LGBT community. In 2013, JCRC sprang into action and convened the leadership of the LGBT and Jewish communities in San Francisco to share about our experience fighting for fellow members of our community from afar.

One of the most important aspects of our activism in support of Soviet Jews and LGBT Russians has been humanizing the movement and listening directly to the leaders on the ground. It is the individual’s stories, their needs, and their freedom that sustains the movement for liberation. Prominent Refuseniks (a term given to Soviet Jews who were denied permission to emigrate) became the face of a human rights movement. The desire to follow the lead of those on the ground harkens to my empowering experience of working with LGBT activists abroad in Israel, as well.

While many hear about the success of Tel Aviv Pride, few realize the fact that Israel’s own indigenous LGBT community, at the helm of organizations like The Aguda, Jerusalem Open House, Israel Gay Youth and many other non-governmental organizations, has thrived in a country where there is far less of a barrier between religion and state. I’m proud of the partnerships these organizations have had here in the U.S. with groups like A Wider Bridge, which fosters relationship building between Israeli and North American LGBT communities, as well as various philanthropies. The friendships that I’ve made with the activists over the years have taught me how to confront the new reality we face here in America, and I am inspired by the interest and support for Israeli civil society that they have spurred in American Jewish and LGBT communities at a time when humanizing the other remains a global challenge.