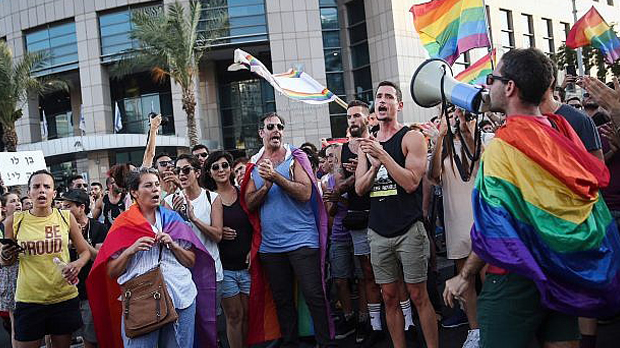 Thousands of people are expected to take part in a nationwide strike on Sunday to protest a law passed Wednesday that denies state-supported surrogacy to homosexual couples and single men, and to draw attention to the inequality of LGBTQ rights in general. 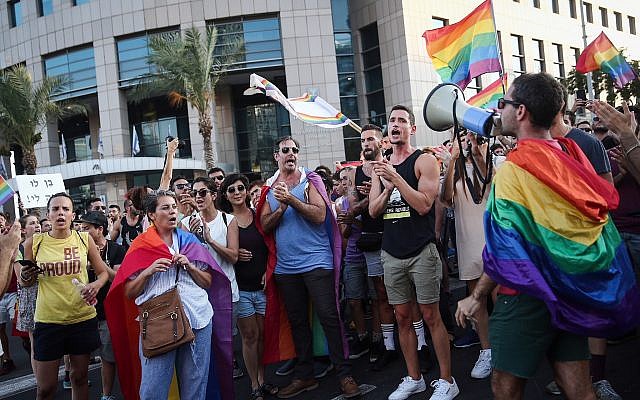 Members of the LGBT community and supporters participate in a demonstration against a Knesset bill amendment denying surrogacy for same-sex couples, in Tel Aviv on July 18, 2018. (Miriam Alster/Flash90)

The bill expanded eligibility for state-supported surrogacy to include single women, rather than only to married heterosexual couples as it had previously. But it stopped there, generating uproar among the LGBTQ community and its supporters.

Jeremy Seeff, a director of the LGBTech group and founder of the Israeli Diversity Standard worked through the night, in collaboration with the Aguda, to appeal to major companies in Israel join the cause. Their efforts were successful and by Thursday morning some 60 companies had already come on board, including IBM, Apple, and Microsoft.

“We at LGBTech and the Israel Diversity Standard work hard all year round to highlight the great work companies are doing to support LGBT+ employees,” Seeff said. “Though our legislature is failing us by adopting an unjust, discriminatory and illogical law specifically excluding single men and gay couples from exercising their rights to family life, we are encouraged to see so many amazing companies taking a stand and leading the way, in place of an unconscionable government. ”

All of the companies joining the strike will allowing their employees to take a paid day off work to join the protest and some have gone the extra mile, stating that they will financially support employees who want to start a family through surrogacy.

“The current version of the surrogacy law excludes the LGBT community and deprives them of the basic and human right to establish a family. This is an unfortunate and unequal law,” Microsoft said.  “From now on, every employee who decides to start a family by surrogacy will receive NIS 60,000, regardless of gender, sector, sexual orientation, age or marital status. Everyone!”

Prime Minister Benjamin Netanyahu said in a video posted to YouTube that he still supports surrogacy for both mothers and fathers, after he voted against an amendment proposed by Likud MK Amir Ohana granting single men access to surrogacy.

“Today we voted in favor of a law for mothers. I told MK Ohana ahead of time that I would not support his current amendment because it would topple the law and then mothers would not have access to surrogacy. Despite that, I said that if he introduces a law for fathers I will support it. This is the right thing to do,” he said.

The Aguda – Israel’s LGBT Task Force said in a post on Facebook, “The gay community is going on strike! Lesbian women cannot register their children, transgender people are being stabbed in the street, youths are experiencing LGBT-phobia in educational frameworks, a Knesset that passes laws against equality — we will not continue our lives as usual, we will not allow bullying against the transgender community, youth, or the LGBT community and its members in the peripheries.”