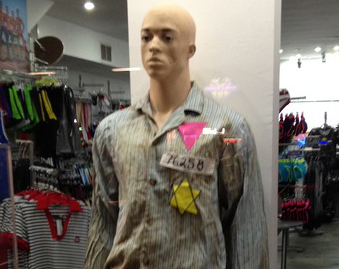 Rabbi Denise Eger condemns West Hollywood’s store decision to dress a window mannequin as a Nazi concentration camp prisoner. Israeli owner of the store: “This isn’t supposed to be offensive, this is part of our history, and it sends a very clear message to stop the hate.”

A mannequin dressed as a Nazi concentration camp prisoner in the window of a store in West Hollywood’s Boystown is sparking controversy.

The mannequin is wearing a concentration camp uniform decorated with both a Star of David and a pink triangle, a badge that Nazis used to identify gay concentration camp prisoners. It is in the window of LA Jock, a store at 8915 Santa Monica Blvd. near San Vicente that sells underwear and other clothing aimed at gay men. Zilberman’s Mantrends company also markets a variety of underwear brands to gay men,  including ES Collection, STUD, Addicted, Freedom Reigns and James Tudor.

Nir Zilberman, the store’s Israeli owner, said his great grandparents were killed in the Holocaust and that he didn’t care if he lost business because of the shocking mannequin display.

“What’s happening in Russia is exactly what happened when Hitler decided to kill Jews, gays, and everyone else,” Zilberman said. “One sad thing in America is that people need to wake up to reality and can’t hide. This isn’t supposed to be offensive, this is part of our history, and it sends a very clear message to stop the hate.”

When asked if retail—and a male lingerie shop, no less— was an appropriate place to demonstrate Holocaust remembrance, Zilberman said the mannequin was a good way for people to see his message clearly and that he was speaking “as the voice for those who don’t have a voice.”

“I’m pretty shocked,” said Rabbi Denise Eger, founding rabbi of Congregation Kol Ami, a Jewish Reform synagogue that welcomes LGBT people. “It’s quite a shocking display, and I’m sorry that the [owner] doesn’t understand the sensitivities of the Holocaust survivors that live in West Hollywood. It’s taking the Holocaust and the memory of those who perished and commercializing it, which is truly an affront.”

Read the full story on WehoVille 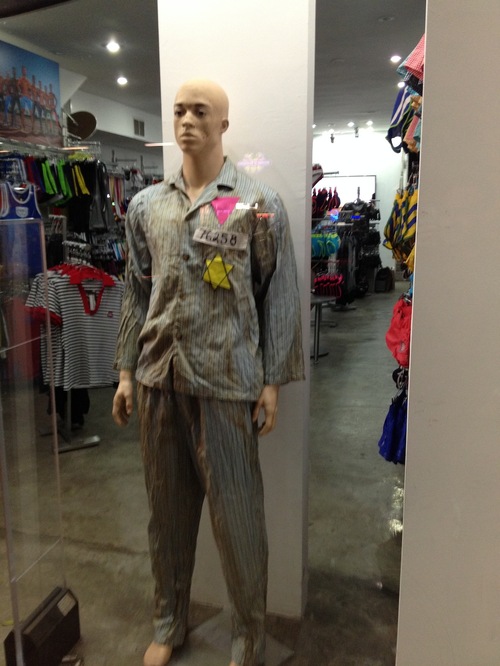