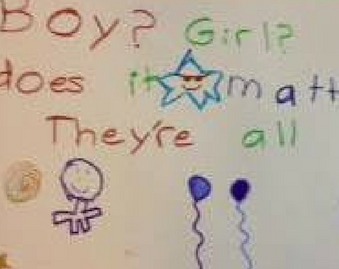 Two 9-year-olds created a club for gender-creative kids their age.

In an interview on Keshet’s blog, Sarah and Naomi [not their real names] tell the story behind this group and how you came up with it.

“Me and Naomi are girls, but we both like to dress in T-shirts and both have short hair. One day, Naomi went into the locker room in the YMCA, and some woman was like, ‘Boys aren’t allowed in.’ Her mom got mad and told them, ‘No, this is not a boy, this my daughter.’ Naomi called me and then we started making signs about it. We had a meeting with the Director of the YMCA, and some other people, and now there’s a new rule that you can’t tell people that they’re in the wrong bathroom or locker room anymore. Then we (with the help of Naomi’s mom) came up with the idea for a club, and it kind of went from there.”

What did you tell your moms when you came up with this idea?

Karen: “I remember you told me that you and Naomi wanted a club for “kids like you guys.” I said, “Great! Let’s do it!” This was before we really knew the term “gender-creative,” but Sarah had been talking a lot in our family about the experience of going to the bathroom and having people looking at her funny and that had been a real issue in our family for a long time.”

Read the full interview on My Jewish Learning