It was a year ago when Caitlyn Jenner (then, Bruce) sat down with Diane Sawyer for the exclusive interview where she came out as a transgender woman in the middle of her transition. Jewish comedienne Julie Goldman, who currently promotes her web series HOT T and her Bravo show The People’s Couch, talked openly with Israeli website Mako Pride about her opinion of the woman who became the most famous transgender in the world. 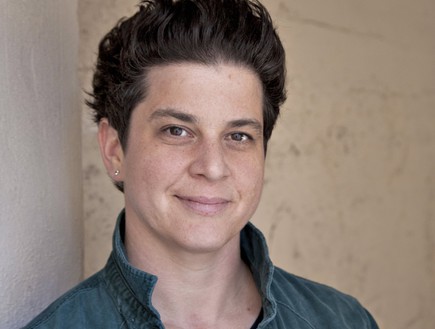 “Caitlyn Jenner is a one year old baby, literally. As a woman, as a human being,”Goldman (in the photo) told Mako. “Bruce spent 65 years as a sexist, spoiled and narcissistic idiot, and now year-old Caitlyn has to handle this baggage.”

Mako’s reporter claims that over the past year, Jenner has created a “celebisation” of transgender people, which is a good thing, but on the other hand, when she spoke publicly, it seemed like she was not educated enough about the history of LGBT community, which is very necessary for a personality who’s always in the public eye, and who the media never get enough of. “Obviously LGBT people need to know their history,” Goldman agrees. “Like the Jews, the women and all people who arrive from loaded ethnic backgrounds, everyone should know the history of their community, and history in general.”

“Perhaps if more religious people looked at their history, they would not rush to belong to a group that since it was established it only kills everybody,” Goldman said.

Will Caitlin be released from her previous personality? Goldman can’t tell. “Right now, the best thing she offers to the world is her visibility, and this is amazing,” Goldman said. “She created awareness for the transgender community in a way that couldn’t have happened if it weren’t a rich and famous man who was doing this gender transition. People are picking on her because of it, but I think this is her greatest strength – visibility – and if it helps exposing so many stories, and shedding a light on an entire community – this by itself is great. But she, as a person, and her political views- it’s just repulsive.”

Despite Goldman’s outspoken criticism of Jenner, according to the interview, she honestly believes Caitlyn can change. “I think that if she will really open up, and listen and think how the rise of right-wing government will affect her life, then she has a chance,” Goldman says. “But I also think she’s a narcissistic, dumb, sexist and attention-seeking whore.”