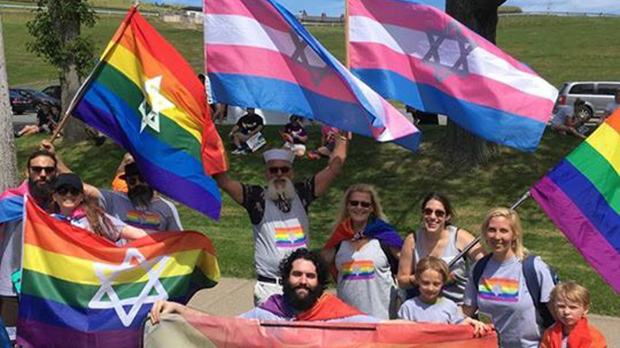 LGBTQ Jews and allies marched proudly in the Halifax Pride Parade (Nova Scotia, Canada) on Saturday, July 22. The March came after a controversy last fall at Halifax Pride’s annual general meeting, in which BDS activists tried and failed to remove all mentions and signs about Israel from the parade. A Wider Bridge was proud to work with our partners at Atlantic Jewish Council and the Centre for Israel and Jewish Affairs (CIJA) to defeat the discriminatory measure. 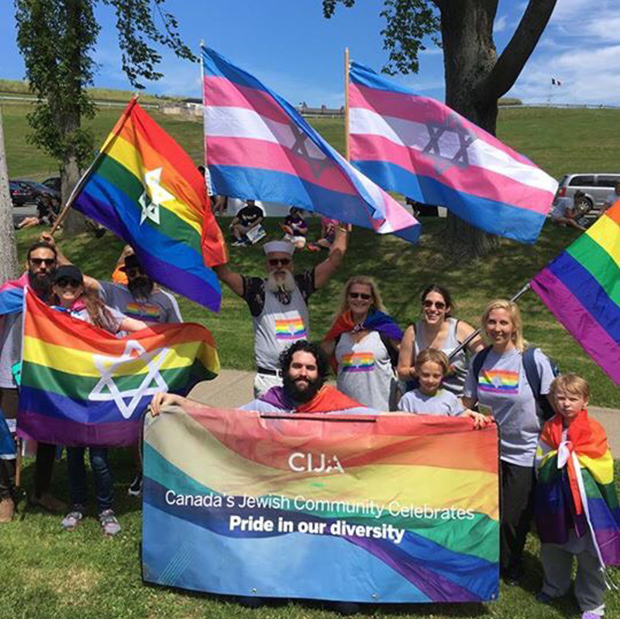 “The Halifax Jewish community is an incredibly inclusive, warm, and welcoming place,” says Naomi Rosenfeld, Executive Director, Atlantic Jewish Council, who lead the Jewish group at Halifax Pride. “After all, maritime hospitality is legendary. For that reason, I sometimes find myself assuming that our community values of inclusion and embracing diversity are self-evident.”

Although not at all representative of the larger Jewish community, sitting in her office Friday, a day before the parade, Naomi got a phone call. A man – whose name she didn’t recognize – called to tell her what a disgrace it was that a Jewish organization such as AJC was celebrating Pride. “Don’t you know what the Torah says about Homosexuality!?!” he screamed at her.

“The call was a reminder that assuming inclusionary values are self-evident is not enough,” Rosenfeld says. “As a Jewish communal organization, we need to be actively exhibiting our acceptance and inclusion of all segments of our community – including LGBTQ+ Jews.”

Naomi Rosenfeld, a straight woman, doesn’t often find herself having to defend the LGBTQ+ community. “As an organization, I feel that the AJC has taken on a leadership role in bringing Jewish-related LGBTQ+ narratives to light in Halifax with many different projects,” she says. “Additionally, through our advocacy partner, the Centre for Israel and Jewish Affairs (CIJA), the AJC is part of public policy activism in Canada, including strong support for LGBTQ+ causes. CIJA helped spearhead Bill C-16, which protects the transgender community, and was a leader in calling on Canada to provide emergency visas for gay and bisexual men fleeing violent persecution in Chechnya in recent months.”

A granddaughter of Holocaust survivors, Rosenfeld, now 25, took over as executive director of the Atlantic Jewish Council in October 2016. “There have been endless challenges in my job as Executive Director,” she says. “Learning about all of the Atlantic Canadian Jewish communities and their histories, engaging the next generation of Jewish leaders, working with the larger community to build bridges and fight antisemitism, and fostering Jewish identities and a relationship with Israel amongst our youth, to name a few. But, each of these experiences has been a wonderful learning opportunity and, throughout every experience, my board, my colleagues, my mentors and Jon have been there to help and guide me.”

Having big shoes to fill, Rosenfeld replaced Jon Goldberg, 70, who sat in the director’s chair pretty much since Naomi was born. To add to that challenge, her tenure began with a controversy that made national news. Her organization worked hard to defeat a resolution at Halifax Pride’s annual general meeting, in which BDS activists tried and failed to remove all mentions and signs about Israel from the parade. A Wider Bridge was proud to work with AJC and CIJA to defeat the discriminatory measure.

“Any claim of Pinkwashing starts from the same flawed premise: an assumption about the intention of one’s actions,” Naomi says. “Still, to this day, there are small but vocal groups in Halifax that claim that the only reason the local Jewish community would ever want to celebrate the Israeli LGBTQ+ population and their long-fought and ever-continuing battle for equal rights is to try and cover-up the Palestinian issue. I take major offense at this assumption. Here in Halifax, and throughout the world, the Jewish identities of many of our community members are intricately tied to Israel. In fact, more than a quarter of our Jewish population in Halifax moved from Israel in the last 10 years! Like in North America, the battle for LGBTQ+ rights in Israel has not been easy and is still ongoing, which is all the more reason that during Halifax Pride, we want to celebrate what has been accomplished.”

“A Wider Bridge is proud of our friends at the Atlantic Jewish Council for marching in Halifax Pride, for the full inclusion of LGBTQ people in Nova Scotian Jewish life, and LGBTQ equality in Canada and Israel,” said Tyler Gregory. “After we partnered with the AJC last fall to push back and defeat a deeply troubling challenge, which sought to ban freedom of expression of those supporting Israel in the parade, we were especially happy to see the AJC marching this year.”