Alex Boda,  a 24 year old immigrant from a modern orthodox community in Central New Jersey, attended the Jerusalem gay pride last Thursday and shares his experience in a column, exclusively for A Wider Bridge. 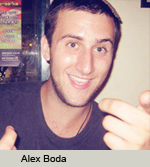 On August 1st at Jerusalem’s 12th annual Gay Pride Parade for Tolerance is when I truly felt at peace with myself.

Through my eyes as a 24 year old oleh from a modern orthodox community in Central New Jersey I have seen both sides of “the wall”. On one side have the conservative up bringing from a quiet family. As Jews, we have the holiest of holies, the Torah. On the other side, I have my own nefesh and personal experiences as an openly gay Jew. None ever said being Jewish and gay would be easy.

Then it all came together on August 1st in Jerusalem during the pride parade. This is where the water greeted the oil, and believe it or not, if stirred in the correct way, they mix wonderfully!

Due to pressure from the ultra-orthodox communities it is much more difficult to have a large visible gay event in Jerusalem, unlike in Tel Aviv where the culture is much more liberal and accepting. However, this also makes the Jerusalem pride parade that much more important because the gay community celebrates the event with a stronger vindication.

Thursday early morning security forces literally were all over the city offering help, guidance, and most of all our protection. Then after a few stops on Jerusalem’s new lite rail system I reached Gan Ha’atsmaut. This is where it all came together what the Israelis would call a “happening”. The American equivalent would just be a gathering of people. There the security really picked up; bags were checked, eyes were looked at, and ID badges were flashed. Everything went smoothly. At the “happening” I was volunteering with The Jerusalem Open House for Tolerance. I was stationed with a police officer making sure everything was in order at our post.

Then at 6pm we started our march up Rechov Rambam. Our route towards the Knesset went through Rechavia. Rechavia was where we were met with intolerance. Stink bombs were thrown from rooftops. The police quickly apprehended the suspects and were placed under arrest. The smell of intolerance never smelt so sweet. Keep in mind we only dealt with that smell for a few minutes; the residents of Rechavia will have to deal with it all shabbot.

A street with no bump in it, is no street at all. No matter where in this world there will always be bigots.

Despite all this, we strongly continued without fear. Drums, noise makers, chants, and beautiful flags were everywhere. At one point in the middle of the parade I just stopped and had a quick rap with G-d, “G-d, it’s me Alex, I left my home and loving family in New Jersey not to run away from anything, but to run to something. I am gay and most importantly I am happy, thank you.”

Above all that, Jerusalem is the capital of Israel and Israel the most tolerant country in the Middle East. The Residents of Jerusalem should not have any less rights than the residents of Tel Aviv. We have the ability and strength to be able to express ourselves to overcome opposition even amongst other Jews.